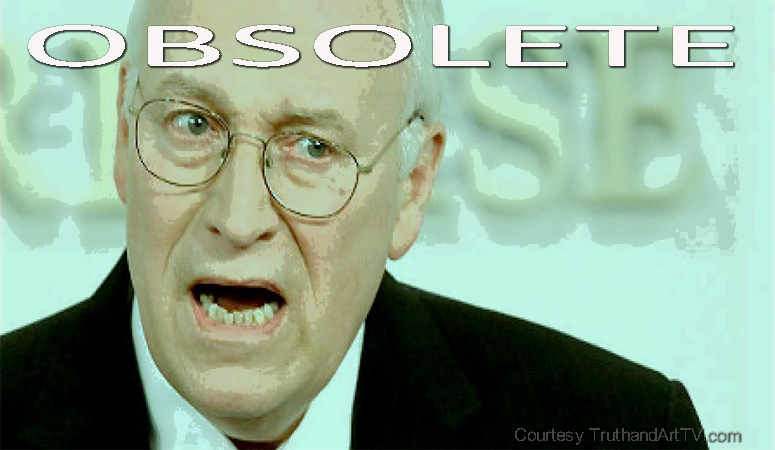 For years now we’ve witnessed Dick Cheney make seemingly on-schedule appearances on the corporate mainstream media platform, voicing his opinion as if he is still relevant. This cycle of giving Cheney a voice and pretending like he is still relevant and that we somehow need to know what he thinks, you may have noticed by now is part of a strange and repeating mainstream media script that has been playing out since the Obama years. It’s the deep state’s best attempt at keeping the Bush administration subliminally and indirectly in command. Think about this for a minute.

And so now, approximately 3 months into the Trump presidency we see Cheney up to his old tricks. Right when you think he went away for good the mainstream media needs you to know that Cheney supports the ongoing unsubstantiated and totally fabricated witch hunt known as the “Russia election tampering” operation created from scratch by the Obama CIA in December of 2016 to get everyone’s attention away from (among other things) Obama and Hillary criminality, the now proven fraudulent birth certificate file posted for years on the White House website and the WikiLeaks revelations of corruption and criminality now fully revealed to the world coming out of Washington D.C. including child trafficking and pedophilia.

Now is not the time to let political amnesia interfere with your critical thinking skills. Don’t be fooled by the fake news rhetoric coming out of the Liberal Left and the Neocons who are desperately trying to undermine the Trump presidency. This entire “Dick Cheney” theater is just another chapter in their continued failed attempts to demonize Russia and create the same world war 3 scenario that Hillary Clinton, John McCain and others who are lined up with the globalist plans have wanted badly for long.

And what Dick Cheney is saying now should alarm anyone who is paying attention:

“There’s no question there was a very serious effort made by Mr. [Vladimir] Putin and his government, his organization, to interfere in major ways with our basic fundamental democratic processes,” Cheney said Monday during a speech at the Economic Times’ Global Business Summit 2017 in New Delhi.

“Another aspect of Mr. Putin’s conduct is the issue that is now very much in the headlines at home, and that has to do with cyber warfare, cyberattack on the United States – the fact that he took his capabilities in the cyber area and used it to try to influence our election,” Cheney said.“In some quarters, that would be considered an act of war. I think it’s a kind of conduct and activity we will see going forward. We know he’s attempted it previously in other states in the Baltics,” Cheney said, according to video of the remarks.

What concerns me the most is that as the war hawk Neocons and their Liberal Left partners continue their attempt to undermine Trump’s presidency and restore their new world order plans for world war 3, most if not all Liberal Left “progressives” are so busy hating Trump that they have no idea this agenda is happening right before our eyes. To these brainwashed Liberals I offer the scenario. Imagine if Obama truly wanted a peaceful relationship with a certain nation and then imagine other politicians sworn to oppose Obama and undermine him, imagine these politicians were on TV every day calling for war against this country that Obama and his administration doesn’t want war with. What would Obama supporters be thinking? Of course all of this is imaginary as this scenario never happened during the Obama years but it is certainly happening now as the deep state continues to undermine Trump in broad daylight.