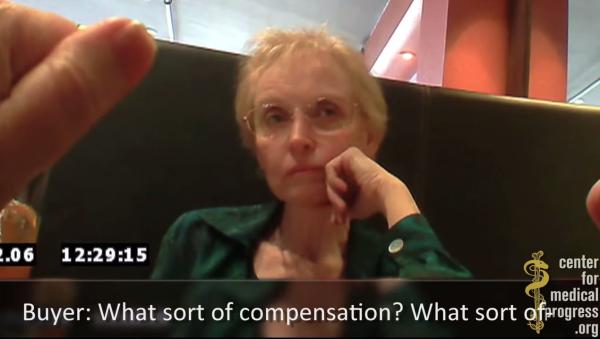 (INTELLIHUB) — Liberal prosecutors in California have charged two anti-abortion activists who exposed Planned Parenthood in a series of undercover videos with 15 felonies in what appears to be a politically motivated attack carried out by allies of the massive abortion provider.

The charges against David Daleiden and Sandra Merritt of the Center for Medical Progress come just eight months after a failed attempt at prosecution in Texas and despite the fact that a company implicated in the undercover videos is actually under indictment for illegally selling hundreds of fetal tissue products for profit and “treating human parts as commodities.”

Amazingly, an Associated Press report on the charges confirms that a literal ally of Planned Parenthood is leading the investigation.

“State Attorney General Xavier Becerra, a longtime Congressional Democrat who took over the investigation in January, said in a statement that the state “will not tolerate the criminal recording of conversations.”

“Prosecutors say Daleiden, of Davis, California, and Merritt, of San Jose, filmed 14 people without permission between October 2013 and July 2015 in Los Angeles, San Francisco and El Dorado counties. One felony count was filed for each person. The 15th was for criminal conspiracy to invade privacy,” wrote the AP.

For their part, The Center For Medical Progress is already fighting back, releasing a statement late Tuesday that not only calls the charges politically motivated and bogus but also links to a news report showing that one of the connected companies is actually facing criminal charges. The group also warned that they plan to soon release even more footage to the entire world.

The bogus charges from Planned Parenthood’s political cronies are fake news. They tried the same collusion with corrupt officials in Houston, TX and failed: both the charges and the DA were thrown out.

The public knows the real criminals are Planned Parenthood and their business partners like StemExpress and DV Biologics—currently being prosecuted in California—who have harvested and sold aborted baby body parts for profit for years in direct violation of state and federal law.

We look forward to showing the entire world what is on our yet-unreleased video tapes of Planned Parenthood’s criminal baby body parts enterprise, in vindication of the First Amendment rights of all.

The statement links to an article in the OC Weekly that reveals that DaVinci Biosciences is actually under indictment for selling off fetal tissue for profit, the exact thing that Daleiden went undercover to expose.

“A father, son and their two Yorba Linda companies suffered some recent setbacks in Orange County Superior Court, where they are fighting charges of illegally selling hundreds of fetal tissue products for profit and treating human parts as commodities,” reported Matt Coker.

“David Daleiden, founder of the Irvine-based anti-abortion group Center of Medical Progress, created controversial undercover videos that connected DaVinci Biosciences, DV Biologics and Planned Parenthood of Orange and San Bernardino Counties in March 2016. At the press conference that following October, Rackauckas said there was no evidence to support Daleiden’s claim that the companies exchanged money with Planned Parenthood or that Planned Parenthood did anything unlawful.”

Amazingly, Coker also reveals that the owners of the company under indictment have direct connections to failed presidential candidate Hillary Clinton.

“The Orange County case against the two companies became a presidential campaign issue when political conservatives and anti-abortion activists connected the Isaías family to Hillary Clinton, who is, of course, a staunch supporter of a woman’s right to choose. Various members of the family—which is based mostly in Miami, Florida, but originally hails from Ecuador—have lavished Clinton with hundreds of thousands of dollars in campaign contributions,” continued Coker.

At this point we have all the makings of an obvious politically motivated attack using the full power of the state of California to attack conservative activists who exposed practices that the left had desperately wanted to keep the public from knowing.

You can view all the undercover videos taken by The Center for Medical Progress here.