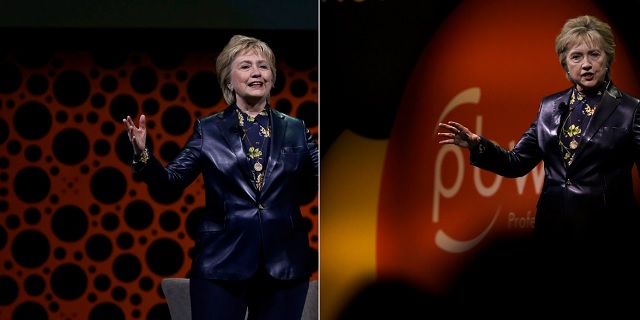 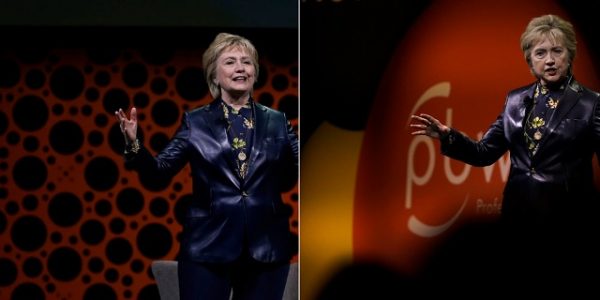 A “bitter” Hillary Clinton dressed up like The Joker from Batman and whined about men oppressing her throughout her life at the Professional BusinessWomen of California conference on Tuesday.

Hillary Clinton – who together with her husband made over $240 million in the last 15 years – attacked a former managing partner at her law firm for asking her if she was going to return to work after having a baby, attacked NASA for failing to hire her as a teenager, and attacked another unnamed “Harvard professor” who allegedly told her they don’t need “more women” at their college.

As The American Mirror reports:

She threw the former managing partner of her law firm under the bus when she recounted a story of being pregnant while working.

“I’d walk down the hall getting bigger and bigger, they’d turn their heads. They didn’t want to talk about it,” Clinton said.

She claimed she kept “raising the idea of what kind of time off do I get,” and she was, of course, ignored by the pig men.

“Chelsea comes early. I have her late one night, the next morning really early my phone rings and it’s our managing partner. He doesn’t say congratulations. He doesn’t say hope you and the baby are fine. He says, ‘When are you coming back to work?’” Clinton said to groans and hisses from the crowd.

Clinton later recounted being rejected by NASA as a teenager — because she was a woman.

“Being told I was being excluded not because I couldn’t meet the physical demands and my eyesight was so bad, but because I was a girl really stung,” she said.

Hillary said she was rebuffed by a Harvard professor, whom she did not name.

While considering law school, Clinton said she talked to a Harvard prof at a cocktail party and told him she was trying to decide on a school.

“We don’t need any more women,” she claims he said, triggering boos from the audience.

“I was filled with this fundamental belief that it was not only unfair, it was just plain wrong that you would exclude people just on the basis of whatever, your race, or gender, whatever,” she said.

It’s not clear how much the “working woman” Hillary Clinton was paid to appear at the conference, though her normal speaking fee is minimum $225,000.

Clinton ended her speech by calling for people to “resist” Trump and his “bad policies that will hurt people and take our country in the wrong direction.”

“It’s the kinds of things you think about when you take long walks in the woods,” she said. “Resist, insist, persist, enlist.”