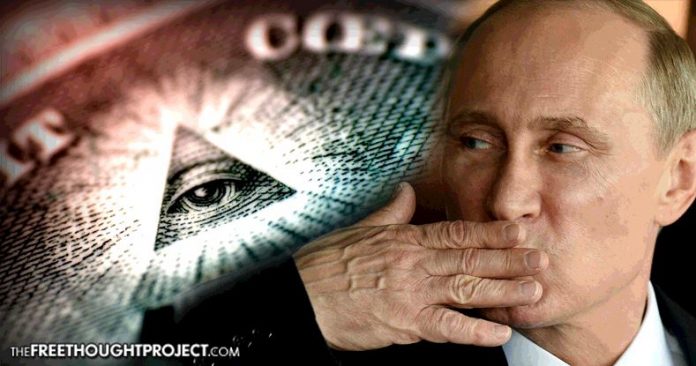 As relations with the West continue to deteriorate — and the potential for crushing sanctions remains tangible — President Vladimir Putin has begun preparing to release Russia from the crushing grip of the international banking system completely, by moving to a nationalist model based and conducting transactions with allies in gold.

In short, Russia has plans to abandon central banks and the dollar — if, indeed, shit hits the fan.

Russia isn’t alone — the move away from the much-maligned, Western-centric international banking cartels toward a system less dependent on massive banks comprises a new plan for BRICS nations (Brazil, Russia, India, China, and South Africa) and their allies to vacate the almighty dollar and assert independence.

For Putin, the bulk issue pertains to the Worldwide Interbank Financial Telecommunication, or SWIFT, system — which allows for speedy and secure financial transfers worldwide — and threats from the United States and its allies to cut Russian banks from access.

“In layman’s terms,” Matthew Allen reports, “SWIFT allows for fast and (allegedly) secure international financial transfers. In fifty years when you are able to use your Bank of America debit card on the Moon (for a low fee of 2,000 moon rubles), it will be because of SWIFT or a system similar to it.”

Economists have repeatedly warned of possible perils in eliminating Russia from the SWIFT system, but in 2014 — when the U.S. imposed sanctions against Moscow — Putin decided not to take any chances and began working on a system more insular and secure for the country and its allies.

Ewald Nowotny, policymaker for the European Central Bank, warned in 2015 cutting Russia out of SWIFT would be “very problematic because it could perhaps undermine confidence in this system,” and, were that to occur, it “could of course affect all companies that do business in Russia.”

Indeed, a recent report boasts any effort to oust Russia from SWIFT would have little effect on the nation’s financial situation, stating,

“If the Society for Worldwide Interbank Financial Telecommunication (SWIFT) is shut down in Russia, the country’s banking system will not crash, according to Central Bank Governor Elvira Nabiullina. Russia has a substitute.

“‘There were threats that we can be disconnected from SWIFT. We have finished working on our own payment system, and if something happens, all operations in SWIFT format will work inside the country. We have created an alternative,’ Nabiullina said at a meeting with President Vladimir Putin on Wednesday.

“She also added that 90 percent of ATMs in Russia are ready to accept the Mir payment system, a domestic version of Visa and MasterCard.”

Reports in January 2016 revealed some 330 Russian banks had moved to the nation’s alternative to SWIFT — SPFS, the ‘system for transfer of financial messages.’

Additionally, “Moscow and Beijing took another step towards de-dollarization with the opening of a yuan clearing bank in Russia. And earlier this month Russia’s Central Bank opened its first-ever foreign branch in Beijing to allow for better communication between Russian and Chinese financial authorities,” Russia Insider reports.

“The financial regulatory authorities of China and Russia have signed a series of major agreements, which marks a new level of financial cooperation,” asserted Dmitry Skobelkin, deputy head of the Russian Central Bank.

As the U.S. Federal Reserve, Bank of England, and other major financial players continue trade in non-physical currency — and, particularly, in metals futures speculation and other riskier practices — buying large quantities of physical gold has become a major priority for BRICS and other nations.

Central banks have been accused of manipulating the system in various ways to ensure the dollar stays atop the world’s financial dealings; but resentment mushroomed, and for many nations not privy to the West’s auspices, abandoning the dollar has become an utmost, if odious, priority.