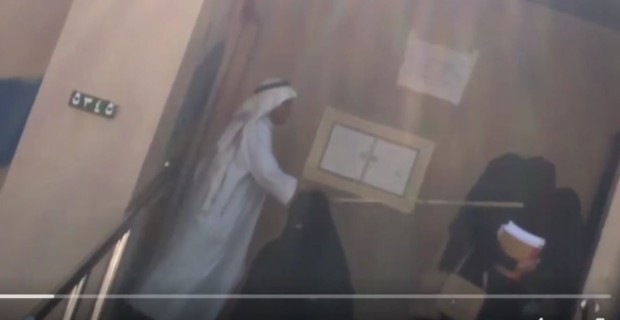 Is this the brand of Islam feminists want to import to the west?

A disturbing video out of Saudi Arabia shows a man with a stick literally herding veiled young Muslim women with a stick as they wait for their male guardians before being allowed to leave.

The clip shows a man allowing some students to leave before he orders the others to return indoors by banging a stick against a mental hand rail. At the end of the clip he appears to strike one of the women on the head with the stick.

According to a Saudi feminist who posted the video on Twitter, it shows a high school guard fulfilling his duties, which include making sure the students are always fully covered and ensuring “women are caged until their guardians or drivers come”.

“Every girl in high school and college has a man outside ‘protecting’ them. Preventing them from leaving with unrelated men,” she added. “When I was a rebellious teenager, I use to take off my veil when I reached my car. This usually pissed off the guard and he use to report me.”

Meanwhile, another shocking video out of Algeria shows Muslims – both men and women – arguing that a man who doesn’t beat his wife isn’t a real man.

“A real Algerian woman, if her husband doesn’t beat her sometimes, she’ll feel…it’s not manly, it makes me happy,” says one woman.

“When she angers me a lot, I beat her,” says another man, while another says it is acceptable to beat women when they cause annoyance.

60% of Algerian women think a husband has the right to beat his wife, according to a UNICEF study cited in the video.

Domestic violence is mainstream in Algeria.
"Do you beat her?"
"Yes, I beat her normally."pic.twitter.com/BEgqNc7Z2E

As we have repeatedly highlighted, despite Islam representing the complete opposite of liberalism in that it is a viciously intolerant belief system that treats women little better than farmyard animals, leftists are trying to embrace Islamism.

This has manifested itself in the promotion of the face veil or the hijab as a symbol of female empowerment, when in reality it is a symbol of female oppression in Islamic countries all over the world. Three feminist moms in Pittsburgh have even produced ‘hijab barbies’ to normalize the head covering.

Actual Muslim feminist groups have been protesting against the hijab for nearly a hundred years. Let that sink in. https://t.co/GoC9JFaeaQ pic.twitter.com/xJMPwRGC2v

Asra Q. Nomani writes, the hijab is a “symbol of a dangerous purity culture, obsessed with honor and virginity, that has divided Muslim communities in our own civil war, or fitna, since the Saudi and Iranian regimes promulgated puritanical interpretations of Sunni and Shia Islam, after the 1970s Saudi oil boom and the 1979 Iranian Revolution.”

Recently, in Bareilly, India, a father killed his daughter, 4, smashing her head against the floor when her scarf slipped from her head during dinner. In Ontario, a few years ago, a man strangled his 16-year-old sister when she defied their father, including by refusing to cover her hair. In November, a former University of Missouri instructor dragged a female relative, 14, out of school “by the hair” when he discovered she hadn’t covered her hair. Today, in Iran, friends of the journalist Masih Alinejad dodge batons as they shoot photos of themselves, hair bare, in a campaign Alinejad started, #MyStealthyFreedom, to protest Iran’s mandatory headscarf law.”

Throughout modern history, actual Muslim feminists have tried to dispense with the hijab as part of their desperate struggle for liberation, notably Huda Shaarawi, who founded the Egyptian Feminist Union in 1922, which encouraged Muslim women to discard their veils.

All this again underscores the blatant fact that leftists would rather pander to the sacred cows of identity politics by embracing and merging with the most misogynistic belief system on the planet than actually maintain and defend classically liberal principles.