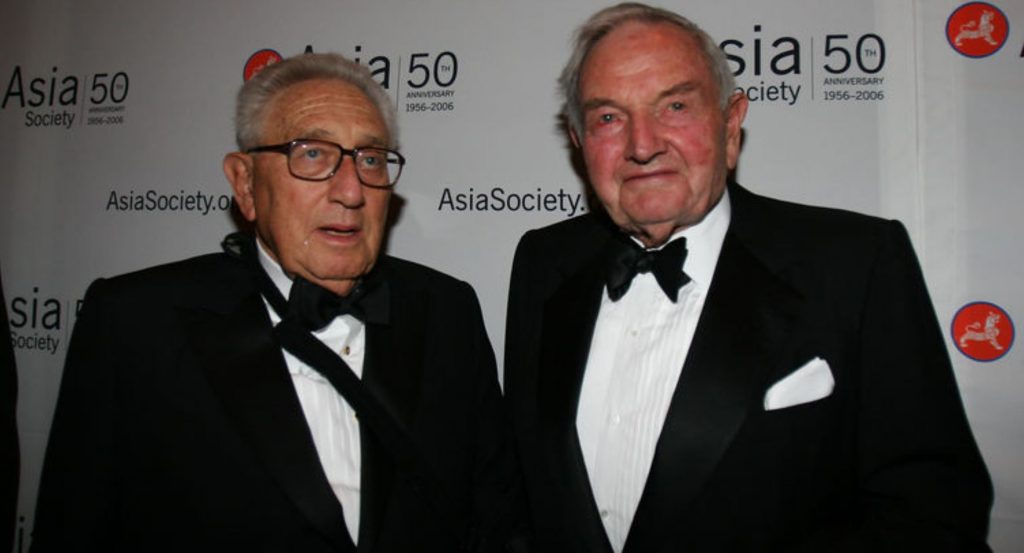 David Rockefeller, head of the Rockefeller dynasty, former Chase Manhattan Bank Chairman, and member of the Council on Foreign Relations, Trilateral Commission, and Bilderberg group, died earlier this month at the age of 101. After a career of promoting eugenics, global government and totalitarian dictators, Rockefeller has finally moved on to the next realm. The deadstream media celebrated Rockefeller as a philanthropist while completely glossing over the darker aspects of his life. Perhaps no review of Rockefeller’s life is more disturbing than the reflection taken by former Secretary of State, prominent “globalist,” and wanted war criminal Henry Kissinger.

The Washington Post released the disgusting piece of propaganda on Thursday under the title, “Henry Kissinger: My friend David Rockefeller, a man who served the world.” The letter reveals an incredible honesty in describing the role both men have played in geopolitics for the last 50 years. The letter makes it clear that presidents and prime ministers are hardly the most powerful movers and shakers working behind the scene.

“He saw his life as an obligation to enable the consequential issues of our time to be pursued by the most talented and committed men and women, for the sake of our society and the peace of the world,” Kissinger writes. Kissinger then describes his initial meeting with Rockefeller at a meeting of the Council on Foreign Relations, another institution that has galled for global government. “Shortly afterward, he encouraged a discussion group, which later was developed into what is now known as the Bilderberg Group, an annual meeting of European and American leaders to explore their challenges and common purposes.”

It is fascinating how open Kissinger is about the creation of the Bilderberg Group. They may be fairly well known today, but only 5 to 10 years ago the group was completely unknown to mainstream society. Media denied the group existed and politicians ran away when questioned about the group. Now, Bilderberg has a website and their meetings are reported on, although the topics are still not publicly discussed.

A decade later, David called on me, at the time secretary of state, to inform me that, in the view of some of the colleagues he had brought with him, the scope of U.S. foreign policy needed broadening. A truly global study to include Asia was required for that challenge. His associates, in fact, included Jimmy Carter, Walter Mondale and Zbigniew Brzezinski; in other words, a government in exile waiting to replace the administration in which I served. But David’s combination of dedication and innocence was such that the thought never took hold. Instead, I became a founding member of the Trilateral Commission, which thrives to this day.

Again, Kissinger is openly admitting influencing geopolitics, specifically U.S. foreign policy. He mentions Rockefeller, former U.S. President Jimmy Carter, and Zbigniew Brzezinski, a former adviser to many presidents and one of the men responsible for creating al-Qaeda. In another section Kissinger writes that Rockefeller was “received around the world like a head of government.” Kissinger then explains how Rockefeller was able to use his power and influence to bring together heads of state and other important players to make policy changes, including nuclear proliferation.

On one occasion, in the late 1980s, I accompanied him to the Soviet Union for a visit to Mikhail Gorbachev to discuss nuclear issues. David had invited former French president Valéry Giscard d’Estaing, former Japanese prime minister Yasuhiro Nakasone and me to produce a document on dealing with nuclear proliferation. Only David would have been capable of bringing about that combination of participants or, for that matter, conceiving the idea.

In another example of attempting to rewrite history, Kissinger describes Rockefeller as a man who was devoted to his family. He remembers that in 1979,”when the Shah of Iran was being exiled, some close friends appealed to David to help find refuge for a ruler who had demonstrated his friendship with America in various international crises.” Kissinger says Rockefeller ultimately helped the Shah despite any negative commercial impact to Chase Bank. What Kissinger fails to mention, is that the Shah was exiled from Iran during the 1979 revolution because he was a puppet who had been installed via a CIA coup in 1953. Rockefeller was simply helping out a brutal dictator who had been tasked with undermining his own people in order to carry out a Western-friendly regime. Great guy, this Rockefeller.

Kissinger concludes by stating that Rockefeller “will remain a reminder that our ultimate legacy will be service and values, not personal ambitions.” Perhaps Rockefeller’s legacy will be a reminder to service and values, but only by studying who he truly was and knowing his motivations can you understand what those values are. To gain that understanding I suggest the new documentary The Unauthorized Biography of David Rockefeller from The Corbett Report.

One final note: While many Internet commentators took the opportunity to laugh or celebrate the death of a man that promoted such darkness, I propose that perhaps we can find a way to have compassion and empathy for these super elites. The people who are even wealthier than Rockefeller, more hidden than Kissinger – these people have been raised to believe they should inherit the world. They may have been duped into believing false eugenics and race science that justifies their views on population control and war. If we choose to celebrate their death, or even initiate violence against these sick souls are we not stooping to their level? Are we so blind to believe that violence could bring peace?

I believe our species will have an opportunity to awaken and confront those who have held us back and held us down. We will have the opportunity for forgiveness, accountability, and healing. How will we choose to act in those moments? Does an eye for an eye truly make us all go blind? We must determine what path we want our species to take on our journey to a higher state of consciousness. Especially when confronting darkness.