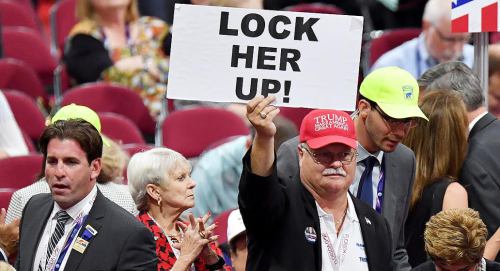 Hillary Clinton stopped being a federal government employee more than four years ago.

Hillary Clinton stopped being a presidential candidate five months ago.

That’s what Senate Judiciary Committee Chair Senator Chuck Grassley (R-Iowa) discovered, and he’s asking why that is so, especially in view of FBI Director Comey’s conclusion that Hillary and her aides had been “extremely careless in their handling of very sensitive, highly classified information.”

ZeroHedge reports, March 31, 2017, that after sending numerous requests to John Kerry’s State Department which fell on deaf ears, Grassley has sent a letter to Secretary of State Tillerson asking why Hillary’s security clearance hasn’t yet been revoked given that “any other government workers who engaged in such serious offenses would, at a minimum, have their clearances suspended pending an investigation.” Grassley writes:

Any other government workers who engaged in such serious offenses would, at a minimum, have their clearances suspended pending an investigation. The failure to do so has given the public the impression that Secretary Clinton and her associates received special treatment.

According to Fox News, the assumption on Capitol Hill is that Hillary is writing her memoirs and justifies her and her staff’s continuing access to classified State Department information because she needs the information for her memoirs.