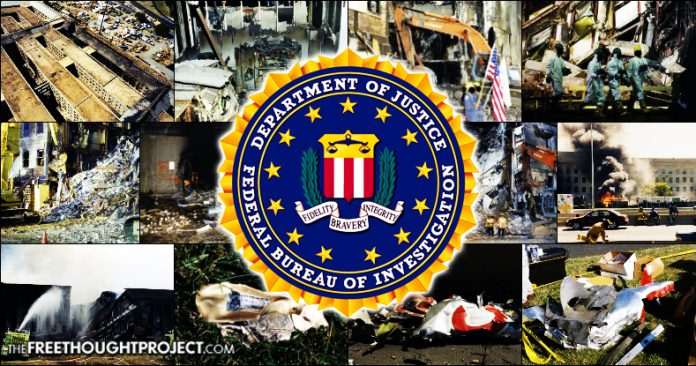 After surreptitiously releasing to the public one week ago, the FBI unceremoniously announced Thursday the unprecedented release of never-before-seen images from the attacks of September 11, 2001, and some of the pictures evoke still more questions.

Others could be seen as putting to rest a popular theory American Airlines Flight 77 never actually smashed into the Pentagon.

The FBI Vault release is minute in size, to say the least — with a mere 27 images comprising the file — and does not include video, audio, nor anything other than photos.

But, given the stony silence from the U.S. government toward families of victims of the attacks, even the meager disclosure is a welcome morsel of information with the potential to provide answers.

Indeed, in the very first image, labeled plainly, “9-11 Pentagon Debris 1,” a single piece of wreckage sits isolated on a parcel of lawn — bearing the American Airlines logo and marked with letters and numbers. While this and pictures of evidence like it ostensively did come from the lawn of the Pentagon in the wake of the plane smashing into the building’s side, it would be prudent to note the lack of context — such as the burned and gaping hole — to distinguish it singularly.

Mangled metal in the second image appears obviously to have come from a plane, but — like the entire release — no description accompanies to explain when, where, or how the wreckage was discovered by investigators. The third file again shows plane debris — this time, the horrendously twisted metal includes a painted red “C” with a white outline, as seen painted on the sides of American Airlines. Several images of the emergency response to the crash follow, evincing a cavernous hole in the Pentagon building, as fire and rescue crews descend on the burning rubble. Although the aforementioned collectively would seem to put to rest that no airplane ever crashed into the Pentagon on 9/11, multiple images of exterior and interior damage evince a smaller hole than would be intuitive — but the sagging floors, twisted girders, and general destruction do show how much of the building suffered on impact. While all of these images appear to at least generally align with the official account of what happened with Flight 77 that day, three images cannot be explained — because they seem to defy logic.

Assumedly taken from an aircraft hovering overhead and from an angle behind the blasted hole, three images show the rounded chasm cleaved into the building’s outer ring — but the burned stone from fires resulting from the explosion doesn’t extend into the inner area on the inside of the Pentagon’s second concentric segment.

However, without any evidence the crash affected the second ring, and observing what would have been the path the downed craft took through the building upon impact, a section of burned building stretching from the ground all the way to the roof oddly and implausibly appears — on the inside of the Pentagon’s third and middle ring.

Indeed, it’s entirely unclear how this strange pattern of damage in conjunction with lack of it could have occurred at all. It should be noted the FBI released a number of revealing images previously — nearly five years ago, in late 2012 — evincing wreckage of Flight 77 found inside the Pentagon.

But these pictures, and the oddity of the release’s size and quiet announcement, should provoke thought and discussion of the events of that day — particularly considering the attacks of 9/11 ushered in the insidious War on Terror and Surveillance State.