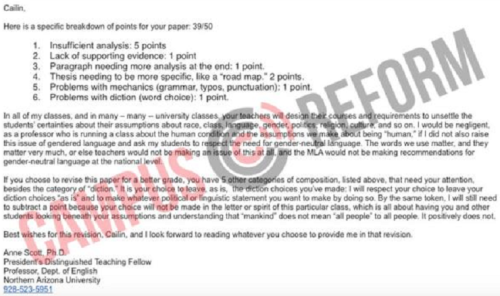 When will this madness end?

Shanna Nelson reports for Campus Reform, March 28, 2017, that Cailin Jeffers, an English major at Northern Arizona University, lost credit on an English paper for using the word “mankind” instead of a gender-neutral alternative.

Jeffers said she received an email from her professor, Dr. Anne Scott, that she had been docked one point out of a possible 50 on a recent paper for “problems with diction (word choice)” related to her use of the word “mankind” as a synonym for “humanity.”

“I would be negligent, as a professor who is running a class about the human condition and the assumptions we make about being ‘human,’ if I did not also raise this issue of gendered language and ask my students to respect the need for gender-neutral language. The words we use matter very much, or else teachers would not be making an issue of this at all, and the MLA would not be making recommendations for gender-neutral language at the national level.”

After offering Jeffers the opportunity to revise her paper, Scott warned that if Jeffers refuses to change “mankind” to a gender-neutral synonym, “I will still need to subtract a point because your choice will not be made in the letter or spirit of this particular class, which is all about having you and other students looking beneath your assumptions and understanding that ‘mankind’ does not mean ‘all people’ to all people. It positively does not.”

Jeffers told Campus Reform that after the first essay assignment, Scott had given the class “a list of ‘do’s and don’ts” that Scott had found in the student essays. Jeffers said:

“Most of them make sense, just things like ‘make sure you’re numbering your pages’ and ‘cite in proper MLA format,’ but she said we had to be sure to use ‘gender-neutral language’. Included with this rule were several examples of what was and wasn’t okay to use. In one of these examples she stated that we could not use the word ‘mankind.’ Instead, we should use ‘humankind.’ I thought this was absurd, and I wasn’t sure if she was serious.”

“I stated that I agree with everything she said about my paper except my use of ‘mankind.’ She proceeded to tell me that the NAU English department, as well as the Modern Language Association, are pushing for gender-neutral language, and all students must abide by this. She told me that ‘mankind’ does not refer to all people, only males. I refuted, stating that it DOES refer to all people, [but] she proceeded to tell me that I was wrong, ‘mankind’ is sexist, and I should make an effort to look beyond my preset positions and ideologies, as is the focus of the class.”

“The issue goes beyond ‘political correctness,’ for my colleagues and I recognize that words help to create our reality, power dynamics, and relationships among people. You are welcome to make a statement about your politics, or conscience, or beliefs by using gender-specific language in your papers, and in many cases gender-specific language is called for, when you can discern with certainty the gender of the characters and author you’re discussing. However, I’ll still have to subtract a point or two for any kind of language that refers to all people as ‘mankind’ or readers as ‘him/he’, for the reasons I’ve outlined carefully above.”

Here are some student reviews of Anne Scott on Rate My Professors:

“For Prof Scott, political correctness is more important than learning. She’s all about viewpoint discrimination. If you want the grade you deserve, you have to read her mind and reflect what’s in there. And it’s a narrow mind. A definite avoid.”

“Way too liberal even for me. Way too ‘politically correct’ for me. Should focus on Chaucer and forget trying to change the world to her utopian fantasy. The point of college is to train people to think, not tell them what to think.”

“You must be ‘politically correct’ and ‘gender neutral’ at all times or your grades will suffer! Run away!”

“Watch your politics in this class. I had to pretend I believed in the nonsense she spouts. Felt like 1984 in there with all the ivory tower liberal type indoctrination.”

“She’s a proponent of ‘gender neutral language’ going so far as to knock points off of other students’ grades if they do not acquiesce to her brand of politically correct nonsense.”

“This complete joke of a professor goes out of her way to get offended and makes her students suffer for it. She will deduct points unless you agree with her about her left wing social justice warrior viewpoints. Don’t take this professor. She deserves to be fired.”

It is noteworthy that rave reviews of Scott got plenty of thumbs down.