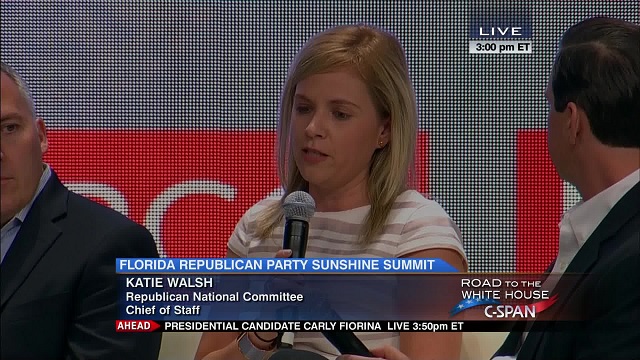 Deputy White House chief of staff Katie Walsh, a NeverTrumper who was rumored to be a leaker, is finally getting the boot.

President Donald Trump is undergoing his first staff shake-up less than three months into his term, sending deputy chief of staff Katie Walsh to bolster the flagging outside groups that were meant to support his agenda, according to a Republican source close to the White House. The move caps a rough stretch for Trump, who has seen his young administration dogged by controversy, his travel ban executive order blocked twice in court, and a health care bill he supported go down in flames.

Walsh, Politico reports and independent sources confirm to Breitbart News, will now be serving as “an adviser both to a pro-Trump nonprofit and the RNC.”

Politico notes that Walsh is a “close ally of chief of staff Reince Priebus,” having served as his chief of staff at the Republican National Committee.

As you know, we’ve got a lot of senior folks in the White House who have a great ability to help push the president’s agenda and message and that’s Reince Priebus, Steve Bannon, Jared Kushner, KellyAnne Conway, and others, but there is a logistical piece of that that has to get implemented and so I try and help with that. So I try and do what I can to make sure the right hand is talking to the left hand and everyone knows what everyone is doing, and there is a cohesive operation or effort to make sure, whatever we’re doing, that nothing happens in a silo if you will. So even if Reince is with the president working on something, and Jared is working on an issue related to trade, and Steve is working on an issue related to immigration or something, we try and make sure everyone is still on the same page and working together and moving together as fast as we can.

But rumors surfaced online that Walsh was leaking information about the White House.

“Everyone knows not to talk to her in the White House unless you want to see it in the press,” Got News editor Charles Johnson quoted a “source close to the president” as saying in February. “The only question is whether or not she’s doing it at the behest of [White House Chief of Staff] Reince Priebus or if she’s doing it to advance herself in DC media circles.”

This is a good move.

Breitbart went on to speculate that Reince could be next.