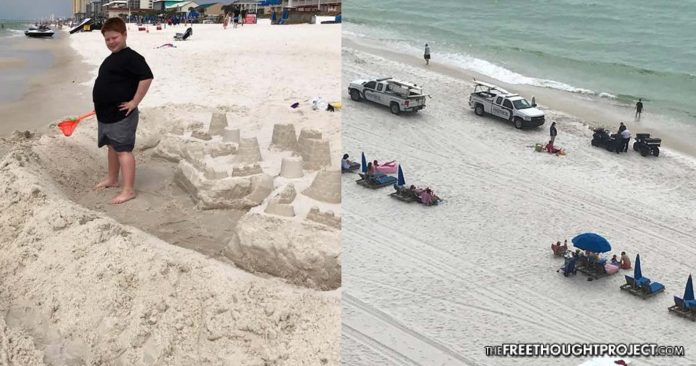 Panama City Beach, FL — In the ostensible land of the Free, cops claim the legal authority to extort money from you, or even kidnap you for a slew of activities which have no victim. Window Tint, smoking a plant in you own home, not wearing your seatbelt, walking across the street, sagging your pants, and even juggling — can and will get you extorted, kidnapped, caged, or even killed. Now, as a recent case in Florida illustrates, we can add building a sand castle to that long list of victimless “crimes.”

Bryant Rylee and his family were at the beach last week building an awesome sand castle when they were confronted by police. The officer, who was ‘protecting society’ by patrolling the beach for illegal sand castles, told the Rylees that their sand castle was in violation of the law.

At first, Rylee thought the officer was joking. After all, he and his son were harming no one while building their most epic castle. In a Facebook post, Rylee explains that it is ‘illegal’ to build a sand castle with a hole deeper than two feet. However, he explained that their hole was only one foot deep, so there was no way it was in violation.

It wasn’t the hole from which the cop was protecting society, though — it was Rylee’s son’s equipment that was criminal. According to their obscure ordinance, only plastic tools are allowed on the beach, and they had some metal ones.

It is important to note that the officer explained to Rylee that she would let him off with a warning if he simply filled in the hole. But Rylee wasn’t buying it. He wanted to know what ordinance he was violating.

It was Rylee’s questioning of authority which led to police escalating the call. When her authority was put into question, the officer brought in backup.

Before the officer could tell Rylee which ordinance he was violating, the family was surrounded by police. In fact, four patrol units would show up and sit there for 20 minutes before any of them could produce the law which said metal beach toys were illegal.

While Rylee, a devout Christian, says he supports law enforcement and prays “daily for their protection,” he also said on his social media account that, “I do believe that ‘we the people’ have a right to ask what ordinance number or to see the ordinance.”

Rylee is absolutely correct. In the American legal system, there is a pillar of jurisprudence known as Mens rae, which is latin for “guilty mind.” The principle itself comes from the latin phrase actus reus non facit reum nisi mens sit rea, which translates to, “the act is not culpable unless the mind is guilty.”

This is a standard test of criminal liability that asks the state to consider whether or not a person has broken a law knowingly before guilt can even be assessed.

After it was all over, as Rylee explains, the construction of a sand castle cost him $25 and could’ve cost him $500 and up to 60 days in jail.

When building a sand castle becomes a criminal act, it is high time we question where this ostensible Land of the Free is headed.