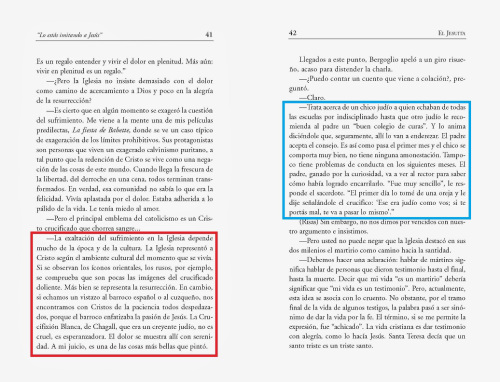 On March 13, 2013, Argentinian Cardinal Jorge Bergoglio was elected pope. The next month, in April 2013, G. P. Putnam’s Sons published the book Pope Francis: His Life in His Own Words.

The book was well received, and currently has an impressive rating on Amazon, of 4.6 out of 5 stars, from 74 customer reviews. 74% of the reviews gave the book a maximum 5-stars rating.

What readers of the English-language Pope Francis: His Life in His Own Words don’t know is that the editor(s) deliberately left out a passage contained in the original Spanish-language El Jesuita.

On pages 26-27 of the English-language Pope Francis: His Life in His Own Words, Bergoglio’s interviewer said: “But the main emblem of Catholicism is a Crucified Christ dripping blood . . .”, to which Bergoglio replied:

“The exaltation of suffering in the Church depends a great deal on the era and culture. The Church has represented Christ according to the cultural environment of the time. If you look at Eastern icons, Russian, for example, you realize they have very few images of a sorrowful crucifixion. It’s more common to see the resurrection. On the other hands, if we look at the Spanish Baroque period or the icons of Cuzco, Peru, we find images of Christ with His patience torn to shreds, because the Baroque era emphasized Jesus’ passion. White Crucifixion, by Marc Chagall, who was a Jewish believer, is not cruel but hopeful. Pain is depicted there with serenity. To my mind, it’s one of the most beautiful things he painted.”

Below are scans of pp. 26-27 of Pope Francis: His Life in His Own Words, provided by Call Me Jorge blog. You can verify this by seeing pp. 26-27 on Amazon, here. I painted the red squares around the relevant passage.

Note that in the English-language Pope Francis: His Life in His Own Words, Bergoglio’s comments on the subject (the main emblem of Catholicism is a Crucified Christ dripping blood) ended with the sentence “To my mind, it’s one of the most beautiful things he painted.”

Not so in the original Spanish-language El Jesuita. There, Bergoglio continued by laughingly telling a story about how a Catholic priest succeeded in getting an unruly Jewish boy to behave. Pointing at the crucifix, the priest tells the boy if he doesn’t behave, “the same thing” will happen to him as the Jew who was crucified.

Here’s the story told by Bergoglio, on page 42 of the Spanish-language El Jesuita:

Below is Google Translate‘s translation of the above passage into English:

It is about a Jewish boy who was thrown out of all the schools by undisciplined until another Jew recommends the father a “good school of cures”. And he encourages him to say that, surely, there they will straighten him out. Father accepts advice. This is how the first month goes by and the boy behaves very well, he has no admonition. He also has no behavior problems in the following months. The father, won by curiosity, goes to see the rector to know how he had managed to put him in charge. “It was very simple,” the priest replied. “On the first day I took him by the ear and I said pointing to the crucifix: ‘That was a Jew like you; If you behave badly, the same thing will happen to you.’”

Anyone who would make our Lord’s suffering and death on the cross a butt of jokes is neither Catholic nor Christian, and most certainly not the Pope of the Catholic Church. Jorge Bergoglio is an anti-pope and a despicable man.