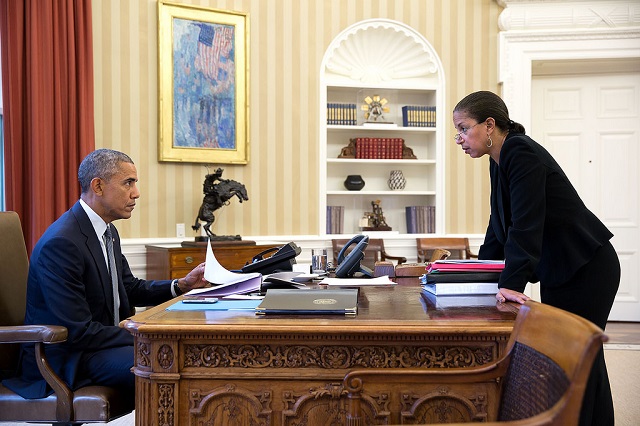 White House lawyers last month discovered that the former national security adviser Susan Rice requested the identities of U.S. persons in raw intelligence reports on dozens of occasions that connect to the Donald Trump transition and campaign, according to U.S. officials familiar with the matter.

The pattern of Rice’s requests was discovered in a National Security Council review of the government’s policy on “unmasking” the identities of individuals in the U.S. who are not targets of electronic eavesdropping, but whose communications are collected incidentally. Normally those names are redacted from summaries of monitored conversations and appear in reports as something like “U.S. Person One.”

According to @EliLake Obama's NSC head Susan Rice opened US intelligence on Trump campaign on "dozens of occasions" https://t.co/UFdgU47Zrp

The National Security Council’s senior director for intelligence, Ezra Cohen-Watnick, was conducting the review, according to two U.S. officials who spoke with Bloomberg View on the condition of anonymity because they were not authorized to discuss it publicly. In February Cohen-Watnick discovered Rice’s multiple requests to unmask U.S. persons in intelligence reports that related to Trump transition activities. He brought this to the attention of the White House General Counsel’s office, who reviewed more of Rice’s requests and instructed him to end his own research into the unmasking policy.

The intelligence reports were summaries of monitored conversations — primarily between foreign officials discussing the Trump transition, but also in some cases direct contact between members of the Trump team and monitored foreign officials. One U.S. official familiar with the reports said they contained valuable political information on the Trump transition such as whom the Trump team was meeting, the views of Trump associates on foreign policy matters and plans for the incoming administration.

Obama’s top aide spied on Trump’s associates and then used the information against him. This is Watergate.

…Rice herself has not spoken directly on the issue of unmasking. Last month when she was asked on the “PBS NewsHour” about reports that Trump transition officials, including Trump himself, were swept up in incidental intelligence collection, Rice said: “I know nothing about this,” adding, “I was surprised to see reports from Chairman Nunes on that account today.”

…The news about Rice also sheds light on the strange behavior of Nunes in the last two weeks. It emerged last week that he traveled to the White House last month, the night before he made an explosive allegation about Trump transition officials caught up in incidental surveillance. At the time he said he needed to go to the White House because the reports were only on a database for the executive branch. It now appears that he needed to view computer systems within the National Security Council that would include the logs of Rice’s requests to unmask U.S. persons.

She ordered the unmasking. No one had to go into Trump Tower and install an old fashioned wiretap on Trump’s servers. The NSA collects all this information, as William Binney said repeatedly, and Susan Rice herself had Trump’s associates unmasked so they could spy on them. This whole Russian conspiracy is just a scam to distract from Watergate 2.0. Rice needs to be hauled before congress immediately.

UPDATE: Circa has more:

Intelligence sources said the logs discovered by National Security Council staff suggested Rice’s interest in the NSA materials, some of which included unmasked Americans’ identities, appeared to begin last July around the time Trump secured the GOP nomination and accelerated after Trump’s election in November launched a transition that continued through January.

The intelligence reports included some intercepts of Americans talking to foreigners and many more involving foreign leaders talking about the future president, his campaign associates or his transition, the sources said. Most if not all had nothing to do with the Russian election interference scandal, the sources said, speaking only on condition of anonymity given the sensitive nature of the materials.

Ordinarily, such references to Americans would be redacted or minimized by the NSA before being shared with outside intelligence sources, but in these cases names were sometimes unmasked at the request of Rice or the intelligence reports were specific enough that the American’s identity was easily ascertained, the sources said.

…The NSA can legally intercept foreigners’ conversations without court permission under Section 702 of the Foreign Intelligence Surveillance Act, but it cannot target Americans’ conversations overseas. If an American is accidentally intercepted or two foreigners are caught talking about an American, that name is supposed to be redacted in intelligence reports and replaced by a description like “U.S. citizen 1.”

But Circa reported last week that Obama opened the door for his political aides like Rice to more easily gain access to unmasked Americans’ names in NSA intercepts through a series of rule changes beginning in 2011.