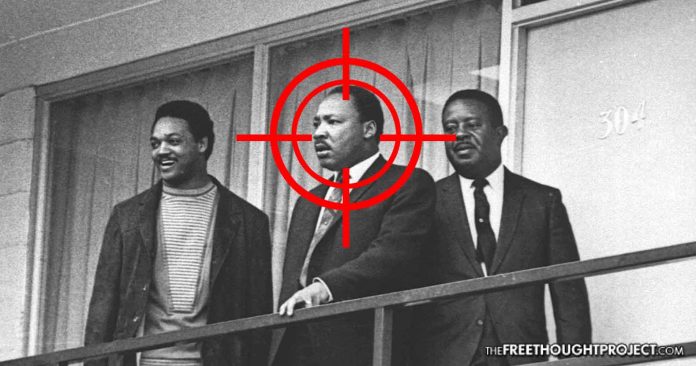 It’s been 49 years since the assassination of Dr. Martin Luther King Jr., the FBI and Memphis Police Department have sparingly released information implicating themselves or members of their agencies in facilitating and directly causing the untimely death of Dr. King. Although the Justice Department officially claims James Earl Ray assassinated MLK, a civil suit later determined that a Memphis cop was involved in a conspiracy to murder the civil rights leader.

During a rainstorm on February 1, 1968, two black sanitation workers in Memphis lost their lives when the truck’s compactor accidentally triggered. On that same day, 22 black sewer workers were sent home without pay while their white coworkers received compensation. Less than two weeks later, over a thousand black sanitation workers went on strike wearing placards reading, “I AM A MAN.”

On March 18, 1968, Dr. King spoke at a rally in Memphis promising to lead a march later in the month supporting the striking sanitation workers. According to the House Select Committee on Assassinations, a black civil rights group named the Invaders sabotaged the March 28 demonstration by distributing hundreds of two by two sticks attached to placards into the hands of impressionable black children caught breaking store windows. The Invaders allegedly incited violence against Dr. King’s orders of peaceful resistance.

Because of the violence perpetrated during the March 28 demonstration, the city of Memphis filed a formal complaint against Dr. King and his associates within the Southern Christian Leadership Conference (SCLC). On the last day of his life, Dr. King spent most of his time with Dr. Ralph Abernathy of the SCLC. While Rev. Andrew “Andy” Young of the SCLC had convinced U.S. District Court Judge Bailey Brown to allow Dr. King to organize a peaceful march scheduled for April 8, Dr. King was preparing for dinner with Rev. Samuel “Billy” Kyles.

Accounts differ regarding Dr. King’s final words. According to FBI documents, Dr. King was discussing the weather with his chauffeur, Solomon Jones Jr., when the fatal shot struck. Rev. Jesse Jackson instead recalls Dr. King chastising him for not wearing a tie. Dr. King then turned to musician Ben Branch, who was standing beside Jackson, and said, “Make sure you play ‘Take My Hand, Precious Lord.’ Play it real pretty.” According to Jackson, those were his final words.

Since revealing its illegal COINTELPRO harassment of Dr. King and the existence of at least 5 paid informants who reported to their Memphis Field Office, the FBI also disclosed that Dr. King’s trusted friend and renowned photographer, Ernest Withers, had been secretly working as an FBI informant. In addition to the FBI informants, a black undercover Memphis PD officer named Marrell McCollough had infiltrated the Invaders in 1968. McCollough stood in the parking lot of the Lorraine Motel on the night Dr. King died. He claimed to have been the first person to reach the body.

Although the Invaders had been removed from the Lorraine Motel a few hours earlier, undercover MPD officer Marrell McCollough remained on the premises until Dr. King’s death. McCollough claimed he spent the day shopping with Rev. James Bevel and Rev. James Orange of the SCLC. Standing in the parking lot of the Lorraine Motel, McCollough witnessed Dr. King’s assassination then ran up the stairs to view the body. ABC News confirmed McCollough went on to join the CIA, and he later testified on March 12, 1978, to the House Select Committee on Assassinations.

While recalling Dr. King’s final moments, Rev. Billy Kyles who was standing beside Dr. King on the balcony admitted decades later, “Only as I moved away so he could have a clear shot, the shot rang out.” Kyles has denied working as an FBI informant, even though he was accused of being a confidential Memphis PD informant.