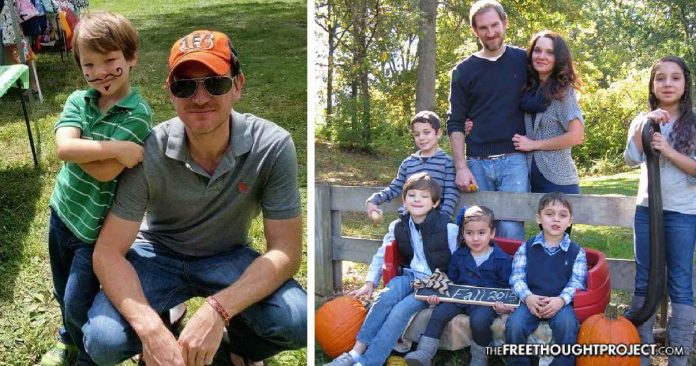 A couple from Ohio have found themselves in a troubling custody battle with Child Protective Services for reportedly rejecting a mental health diagnosis of their son urged by the school administration. The disagreement has turned ugly and parents Christian and Katie Maple say they have lost custody of their son over refusing medical treatment that they deemed excessive and unnecessary.

According to a report from Medical Kidnap and Health Impact News, the incident originated in February when the Maples were alerted by their son Camden’s school, Bowman Primary School, that a “disruption” had been caused in class by Camden. Camden had allegedly remarked in class that he was feeling bad about himself and wished that he could be “erased” from the earth.

The Maples say that the school’s counselor chose to follow up on this remark by asking Camden how he would go about erasing himself, and Camden responded that he would “stab himself in the eye with a knife.” Christian then went to the school to retrieve Camden for a discussion at home about the incident.

The Maples claim that they had a lengthy discussion following the incident. Camden said that he was feeling upset that day, but didn’t wish actual harm upon himself and made the remarks to see what the counselor’s reaction would be. Katie further explained that “The school thought we should have taken him to the hospital emergency room for a mental health evaluation, but upon assessing the situation and speaking to him at home, it was clear to us that he posed no threat to himself and just said it to get a rise out of the counselor. He has never said anything about harming himself prior to this incident or after. This was one time, one day…most likely repeating something he heard somewhere.”

While the school had reportedly urged the Maples to seek an emergency mental health evaluation of Camden, the parents felt that they had properly handled the situation and chose not to send Camden to the emergency room for an evaluation. The school reportedly pressed the matter further, asking the Maples if they had taken Camden to the hospital and inquiring about what they had discussed with Camden.

The Maples said that the school contacted CPS after their conversation, and that this was not the first time the school had done so. Katie Maple provided the following context regarding how she and the school have clashed in the past over how to raise Camden:

My stepson Camden is a very energetic and intelligent 7 year old. He tested a full grade level above where he should be! Camden gets very good grades, but he gets bored easily in class and acts out on occasion, like children sometimes do. The school thinks he is ADHD, we as parents disagree. We believe that it stems mostly from boredom and not being challenged in the classroom. The school has tried on several occasions to get us to have him diagnosed, so that he can be medicated. We as parents do not have the problems the school claims to have with him, at home. We know how to deal with a rambunctious 7 year old, but the school is content with making him believe that he is a bad child, we disagree.

The school did not like us going against their recommendations and proceeded to call children services 4 times over the course of the past year for false allegations ranging from physical abuse, neglect and no food in the house. We have no idea where these allegations came from, as we do not abuse our children and we have plenty of food. They were obviously completely made up. CPS never contacted us about these phone calls because they themselves admit that the calls were unsubstantiated.

Christian Maple said that he received a call from CPS after the incident at Camden’s school regarding a report of neglect; he said that CPS requested a home visit to “investigate.” Christian declined to grant permission to have CPS come into their home and said he reminded the agency of his 4th Amendment rights. Christian said he then received another call from CPS, about 2 weeks after the original incident, alerting him that he had a court hearing to attend that afternoon about the incident. “Upon appearing in court we find out that the allegations have now changed from neglect to a “dependent child” case,” Katie said. “We find out that this is an ‘Emergency shelter care’ hearing later, we had no idea what we were walking into.”

The Maples said that at this hearing, CPS sought to remove Camden from his home by claiming that the child has a mental disorder that requires him to be placed in custody of CPS. During this hearing, the court granted CPS permission to take him out of his family’s care and into custody of CPS. Katie said that this was done with “zero proof of any such condition and zero proof of any parental wrongdoing.”

A common argument heard within the public school system is that students who are victims of neglect need administrators and counselors to step in and assist in behavior-related incidents. This case appears to be a worrisome overstepping of parental authority; there is no evidence of depression or other behavioral issues in Camden provided thus far, and the Maple family appears steadfast in their dedication to handle any issue their son may face. Removal of a child from his home, which was once only conducted in extreme cases with hard evidence of mistreatment, is an action that holds drastic consequences for the entire family.

A hearing in the Maple family case was scheduled on March 23rd, and an adjudication hearing is set for April 20th.

“My husband and I have talked with lawyers, counselors, friends and family and everyone agrees that this does not add up and what CPS and the court has done is wrong and not typical protocol. They have no case for abuse or neglect and are now fishing for a reason to justify their actions. They have ordered my husband and I to undergo a drug and alcohol screening, random drug tests and a mental health evaluation,” said Katie. “We have completed the evaluations. Our evaluator was thoroughly confused as to why we were even in her office and could not believe the situation that had brought us there. We have zero substance abuse issues. We do not do drugs and have never been accused of such. We have zero mental health issues. Why would they order us to do this? Again, another fishing attempt to try to find a reason for justifying their actions.”