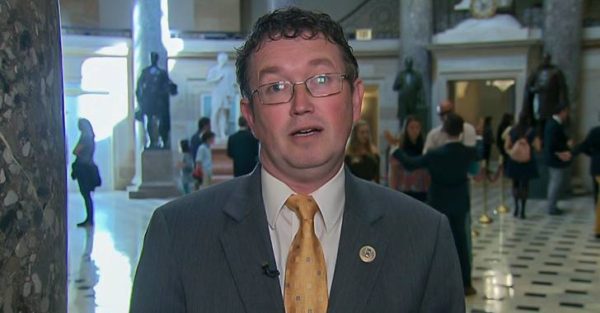 (ANTIMEDIA) A CNN anchor was left speechless Wednesday during a televised interview when a congressman questioned the mainstream narrative that Bashar al-Assad attacked his own people with chemical weapons this week.

“It’s hard to know exactly what’s happening in Syria right now. I’d like to know specifically how that release of chemical gas, if it did occur — and it looks like it did — how that occurred,” Representative Thomas Massie told CNN’s Kate Bolduan.

Continuing, the Kentucky congressman asked the question so many who doubt the established line have asked in the past: Why?

“Because frankly, I don’t think Assad would have done that. It does not serve his interests. It would tend to draw us into that civil war even further.”

Note that the corporate anchor’s expression snaps to attention the instant she realizes Massie is doubting the narrative.

Bolduan, visibly taken aback by what the man is saying — as though it were inconceivable a U.S. lawmaker might have an original opinion on matters — fumbled for words a few moments before managing a simple: “Who do you think is behind it?”

Massie began to answer, but Bolduan cut him off. Unsurprisingly, she asked him directly if he was saying he believes what the Russians are saying — that Assad had nothing to do with the attack that killed dozens in Syria on Tuesday. Reuters reported Wednesday that the attack has sparked renewed calls to oust the country’s president.

The Kentucky congressman stuck to his guns, however, reiterating his earlier position:

“I don’t think it would’ve served Assad’s purposes to do a chemical attack on his people…It’s hard for me to understand why he would do that — if he did.”

The CNN anchor, clearly at a loss for words, thanked Massie for his time.