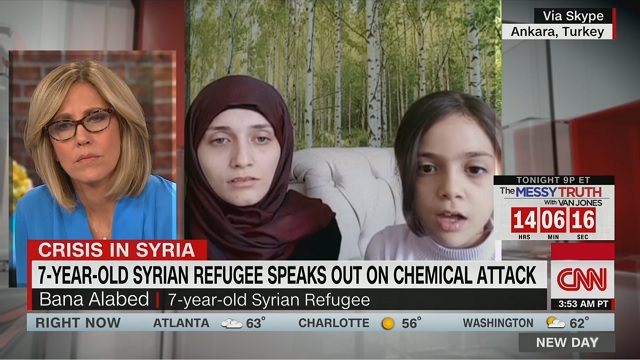 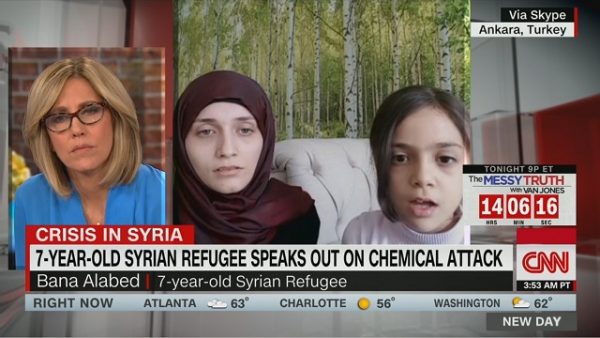 CNN is calling it a “7-year-old Syrian girl’s heartbreaking plea” to stop the war in Syria, in reality it’s a fake news hoax to get the Trump administration to overthrow Assad and turn on Russia.

The top story from CNN’s front page on Wednesday is a disgusting Iraq-has-WMDs-style fake news story to con America into another war.

Camerota asks her: “Bana, do you [a 7-year-old girl] blame President Assad for this [chemical attack]?”

CNN has child blatantly read off a script in push for war to overthrow Assad, calls it a "7-year-old Syrian girl's heartbreaking plea." pic.twitter.com/bmk6PjsoHn

“What is your message to President Assad?” Camerota asks the 7-year-old.

“I am very sad,” Bana says, looking down and blatantly reading off a script. “A lot of died,” she says, clearly struggling to read and skipping over the word “people” or “Syrians.”

“The world is watching,” she stammers, “the world doesn’t do anything.” It goes on for another minute with Bana struggling to read her clearly pre-written propaganda lines. Eventually she asks, “why you, why can’t you, stop the war?”

“I don’t know Bana, I don’t know why the world can’t stop the war in Syria someday,” a torn Camerota responds, ignoring how incredibly fake and staged the whole shameless stunt she just took part in is.

This is the epitome of fake news and it’s a thousand times more dangerous to our country than some schmuck in Macedonia writing about fake endorsements from the Pope.

Fortunately, many people are questioning this BS on Twitter:

I pray for this mother & child. I also pray for the souls of CNN, their corrupted use of news & taking advantage of their suffering….