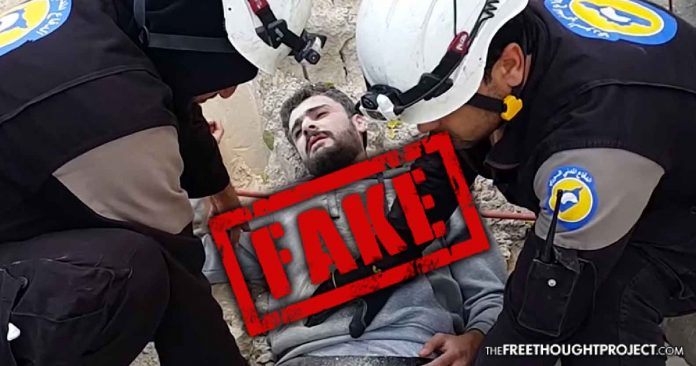 Earlier this week, it was alleged the Syrian Army had once again gassed its own people. Mainstream media outlets everywhere ran the story without so much a question as to whether or not the allegations were founded.

Even President Trump weighed in on the attacks. “My attitude towards Syria and Assad has changed very much,” President Trump declared at a recent press conference (Courtesy Fox And Friends). Going further, he said in a statement, “Today’s chemical attack in Syria against innocent people, including women and children, is reprehensible and cannot be ignored by the civilized world.” But many in the alternative media, including The Free Thought Project, find the story eerily similar to an alleged gas attack from four years ago. President Obama declared his “red line” was if the villainous Bashar Al Assad regime would use gas on his own people, the United States would take military action against the Syrian government.

Lo and behold, just a short time after Obama made the promise to attack Syria if gas was used, an alleged gas attack happened killing many Syrian civilians in the rebel-held area of Aleppo. Fortunately, Obama did not keep his promise to involve the U.S. in yet another war, preferring instead to arm “moderate rebels” in the area to attack Assad. Those “moderate rebels” according to Representative Tulsi Gabbard (HI) are the Islamic State, otherwise known as ISIS. The outspoken representative from Hawaii said the U.S. has been funding Al Queda and ISIS for years and she, along with Senator Rand Paul, both introduced legislation into Congress known as the “Stop Funding Terrorists Act”.

Paul’s father, former Representative Ron Paul, came out strongly against the allegations and called the gas attack a “false flag” attack purported by the “moderate rebels” to give the U.S. the impetus to invade Syria as it has been threatening for many years now. Complicating matters is the fact Syria has allied with Russia and China, creating a perfect climate, as some have said, for World War III to take place. All the countries of the world are now amassing in and around Syria.

But it’s what the White Helmets have done in the past which should call into question any and all claims they have ever made. The White Helmets, emergency response teams whose film actually won an Oscar, are also guilty of staging bombings. Then, when they got caught staging the scenes, said they were simply doing a mannequin challenge to take their cause viral. How convenient! The video, which emerged in 2016, showed several bombing victims, covered in dust and blood, being pulled from Allepo’s rubble. When the alternative media ran the video as a phony one produced by an unscrupulous White Helmet media coordinator, then and only then, did the story of it being a mannequin challenge emerge.

It’s a familiar scene: Syria Civil Defence, also known as the “White Helmets,” rushing to rescue a man covered in rubble, but unlike thousands of other videos from Aleppo, this one is staged.

After being called out for the fake video on social media, the White Helmets released a statement apologizing for it.

“This video and the related posts were recorded by RFS media with Syria Civil Defence volunteers, who hoped to create a connection between the horror of Syria and the outside world using the viral ‘Mannequin challenge.’ This was an error of judgment, and we apologize on behalf of the volunteers involved,” the statement read.

So why should anyone believe anything the White Helmets say now about a gas attack being held in rebel territory, the same territory Gabbard says is controlled by American-funded ISIS operatives?

A statement from the Syrian military accused insurgents of responsibility and said they had accused the army of using toxic weapons “every time they fail to achieve the goals of their sponsors.”

But only the Syrian military had the ability and the motive to carry out an aerial attack like the one that struck the rebel-held town of Khan Sheikhoun.

The Military Industrial Complex will be the only ones to profit from the war in Syria. As The Free Thought Project previously reported, the conflict in Syria is more about the Qatar-Turkey pipeline of natural gas than it is with anything else. It is high time the American people stand up to the warmongers in DC and demand no more wars for profit.