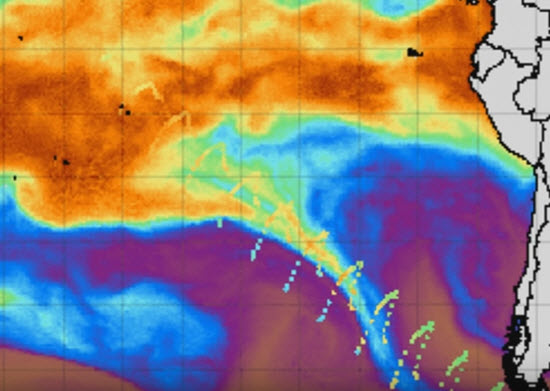 A bizarre pulse anomaly showed up on the Morphed Integrated Microwave Imagery at CIMSS readout for Global Total Precipitable Water on Sunday.

It originated from Antarctica.

You can view the original here.

The energy pulse appears to be feeding into the main jet stream.

It’s interesting timing because not only did a 5.3 earthquake hit off the coast of Italy the following day, a quake that was apparently hidden my major agencies like the USGS —

But back during the Cold War in the 1950s during the International Geophysical Year (1957-58) after which a dozen nations signed the Antarctic treaty which claimed, among other things, the entire continent of Antarctica would be used only for purely scientific, internationally cooperative purposes, it was mentioned in the papers multiple times that all weather originates at the poles and that global weather control was within scientists’ reach in Antarctica.

Fast forward to today where the general public is told little about the place except here and there when scientists find a new harmless bacteria or something and, randomly we pick up an anomalous microwave pulse coming from there on the radar…