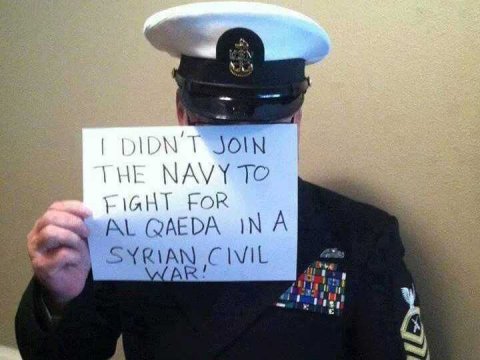 We are closer to the start of World War III than we have been in decades.  In part 3 of this series of articles, I discussed the fact that President Trump’s team was preparing a “military response” in Syria and that a “coalition” is being formed to remove Syrian President Bashar al-Assad from power.  Well, as I am writing this article the missiles have started flying.  Cruise missiles from a U.S. Navy vessel in the Mediterranean Sea have hit multiple targets inside Syria, and many fear that what we have just witnessed could be the beginning of a broader conflict.

Earlier on Thursday, Senator Rand Paul (R-Kentucky) announced he would oppose any military action without a vote in Congress.

“The President, if he decides to do something in Syria, he would come to Congress and ask for a declaration of war. Short of Congress voting on it, I’m opposed to illegal and unconstitutional wars,” Paul told Fox News radio show ‘Kilmeade and Friends’.

Now that the missiles have started flying, it may be too late to stop this war from happening.

But that does not mean that we shouldn’t try to stop it.  Now is the time to raise our voices and to let Donald Trump know that we do not want this war.

And what is especially tragic about all of this is that Donald Trump is taking us to war because of a misunderstanding.  Rand Paul’s father, former presidential candidate Ron Paul, is among many that believe that there was “zero chance” that Assad would have deliberately used chemical weapons against those innocent people…

Pointing out that the prospect of peace in Syria was moving closer before the attack, with ISIS and Al-Qaeda on the run, Paul said the attack made no sense.

“It looks like maybe somebody didn’t like that so there had to be an episode,” said Paul, asking, “who benefits?”

“It doesn’t make any sense for Assad under these conditions to all of a sudden use poison gases – I think there’s zero chance he would have done this deliberately,” said Paul.

As I discussed in part 1 of this series, the incident in Syria’s Idlib province on Tuesday was almost certainly a false flag attack that was designed to pull the United States and other western powers into the war.

And since I wrote that article, more evidence that this was a false flag attack has continued to emerge…

Evidence which has emerged in the aftermath of the attack at Khan Sheikhoun indicates that not only was the nature of the attack misreported by the media, but that certain individuals on the ground in Syria may have had foreknowledge of the attack up to several days before it happened. On April 3rd, 2017, an anti-Assad journalist tweeted that the next day he would be launching a media campaign to cover airstrikes on the Hama countryside, including the use of chemical weapons. It is not clear how the reporter was able to know that chemical weapons would be used an entire day before the attacks occurred.

Observers further noted that on April 1st, 2017, a doctor on the ground in Khan Sheikhoun, Dr. Shajul Islam, had received several shipments of gas masks in the days running up to the chemical incident. The revelations on Twitter fueled speculation that opposition figures were aware of the chemical attack days before it actually happened, contesting the narrative that the Syrian government was responsible. Daily Mail has reported that Dr. Shajul Islam was at one point sought by the British government in connection with the abduction of two journalists in Syria, and security services have stated that Islam and his brother may have had ties to ISIS executioner “Jihadi John.”

In addition, it is very interesting to note that the “White Helmets” were ready and waiting with their cameras to film the attack when it happened.  The White Helmets are funded by George Soros and they have been closely affiliated with al-Qaeda in the past.  They very much want to see Assad removed from power, and so they would greatly benefit from the U.S. getting involved in the war in Syria.

The narrative for the August 2013 attack in Ghouta, which Barack Obama cited as the pretext for a long awaited U.S. attack on government targets in aid of jihadist rebels, completely collapsed after it emerged that the casualties were the result of an accident caused by rebels mishandling chemical weapons provided to them by Saudi Arabia.

As journalist Seymour Hersh reported in December 2013, intelligence officials told him that the entire narrative was a “ruse” and that “the attack was not the result of the current regime.”

If Donald Trump would have just waited until all the facts were known, it is quite likely that he would have seen that there was absolutely no need to attack Syria at all.  This is something that I discussed on the Alex Jones Show on Thursday, and hopefully we can spread this information far and wide before it is too late.

Because if the U.S. does something very foolish in Syria, there is a very real possibility that it could actually cause World War III to erupt.  I included the following quote in part 3 of this series, but I want to share it again because it shows how much is at stake.  According to The Intercept, one of the military options that has been presented to Trump is a “saturation strike” that would result “in Russian military deaths”…

According to both U.S. military officials, the current proposal would likely result in Russian military deaths and mark a drastic escalation of U.S. force in Syria.

One U.S. military official said the decision to allow the strikes, which would kill Russians, signals a significant change in policy by the Trump administration. A decision by Trump to go forward with the plan would be a reversal from the Obama administration, which denied multiple air strike proposals  that would likely cause Russian personnel casualties in Syria.

I cannot even begin to describe how foolish it would be for Trump to make such a move.

Hopefully Trump will stop listening so much to his generals and will begin to listen to some common sense.

When Obama was considering military action against Syria in 2013, Trump strongly urged him not to do it…

In one September 5, 2013 all-caps rant, Trump tweeted, “AGAIN, TO OUR VERY FOOLISH LEADER, DO NOT ATTACK SYRIA – IF YOU DO MANY VERY BAD THINGS WILL HAPPEN & FROM THAT FIGHT THE U.S. GETS NOTHING!”

“Don’t attack Syria – an attack that will bring nothing but trouble for the U.S. Focus on making our country strong and great again!” Trump tweeted four days later.

Trump was right on the money when he originally said those things, and hopefully he will go back and read those tweets and take his own advice.

We live at a time when the world is becoming increasingly unstable, and many of the things that I have been warning about for a very long time are starting to come to pass.

Nothing good is going to come out of an attack on Syria.  Other than “looking tough”, there is nothing to be gained for the United States, but there is so much that could go tragically wrong.

In 2013, the American people very loudly let Barack Obama know that they did not want a war with Syria.

If we want to stop a war with Syria in 2017, we need to be even louder than last time, because President Trump seems determined to act very quickly.

So if you do not want us to go to war with Syria, raise your voice right now, because tomorrow might be too late.