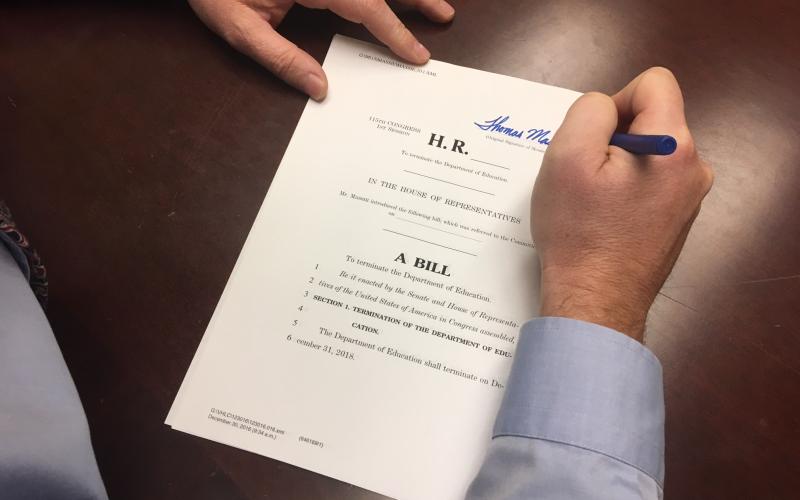 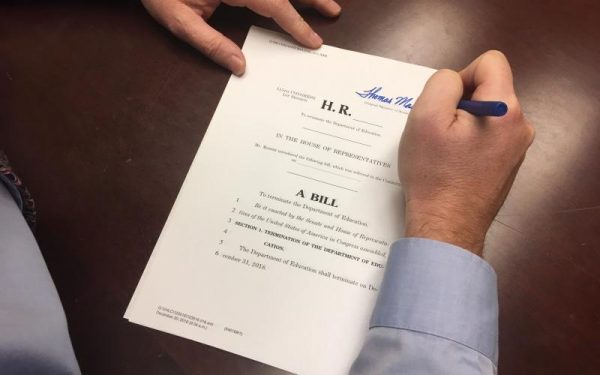 In another straightforward bill that would simply do what it says, Congressman Thomas Massie (R-KY) has introduced HR 899, which would abolish the unconstitutional Department of Education.

Congressman Massie is one of the few congressmen who has stood for the Constitution, even in the face of socialized medicine being pushed by the Speaker of the House and president of his own party.

Massie has introduced the HR899, which would abolish the Federal Department of Education by the end of 2018. Here is the simple text of the bill.

Be it enacted by the Senate and House of Representatives of the United States of America in Congress assembled,

SECTION 1. TERMINATION OF THE DEPARTMENT OF EDUCATION.

The Department of Education shall terminate on December 31, 2018.

The bill has 10 co-sponsors. Among those are:

This bill was introduced as President Donald Trump announced his Secretary of Education Betsy DeVox.

“Neither Congress nor the President, through his appointees, has the constitutional authority to dictate how and what our children must learn,” said Massie.

“Unelected bureaucrats in Washington, D.C. should not be in charge of our children’s intellectual and moral development,” Massie added. “States and local communities are best positioned to shape curricula that meet the needs of their students. Schools should be accountable. Parents have the right to choose the most appropriate educational opportunity for their children, including homeschool, public school, or private school.”

“For years, I have advocated returning education policy to where it belongs – the state and local level,” said Rep. Walter Jones, an original co-sponsor. “D.C. bureaucrats cannot begin to understand the needs of schools and its students on an individual basis. It is time that we get the feds out of the classroom, and terminate the Department of Education.”

“I’ve always been a proponent of empowering parents, teachers and local school boards who best know our children and their needs,” said Rep. Raul Labrador. “Eliminating the U.S. Department of Education is the most important step we in Congress can take in returning decision making to the local level.”

“Education of our students should lie primarily with parents, teachers, and state and local officials who know how to meet their individual needs best,” said freshman Rep. Andy Biggs. “Since its inception, the Department of Education has grown into an unrecognizable federal beast, and its policies have helped foster Common Core across the country. It is time the one-size-fits-all approach by the federal government is ended and authority is returned to the local level.”

For those who are against the Department of Education, remember the words of President Ronald Reagan on September 24, 1981:

“As a third step, we propose to dismantle two Cabinet Departments, Energy and Education. Both Secretaries are wholly in accord with this. Some of the activities in both of these departments will, of course, be continued either independently or in other areas of government. There’s only one way to shrink the size and cost of big government, and that is by eliminating agencies that are not needed and are getting in the way of a solution. Now, we don’t need an Energy Department to solve our basic energy problem. As long as we let the forces of the marketplace work without undue interference, the ingenuity of consumers, business, producers, and inventors will do that for us. Similarly, education is the principal responsibility of local school systems, teachers, parents, citizen boards, and State governments. By eliminating the Department of Education less than 2 years after it was created, we cannot only reduce the budget but ensure that local needs and preferences, rather than the wishes of Washington, determine the education of our children.”

Reagan made those remarks just one year after the Department of Education began.

Let President Trump demonstrate he is really outside of Washington and advance this bill in the same manner he has the RINOCare bill. It will not only save taxpayers money and the dumbing down of their children, but it will be a constitutional move that parents everywhere can appreciate.