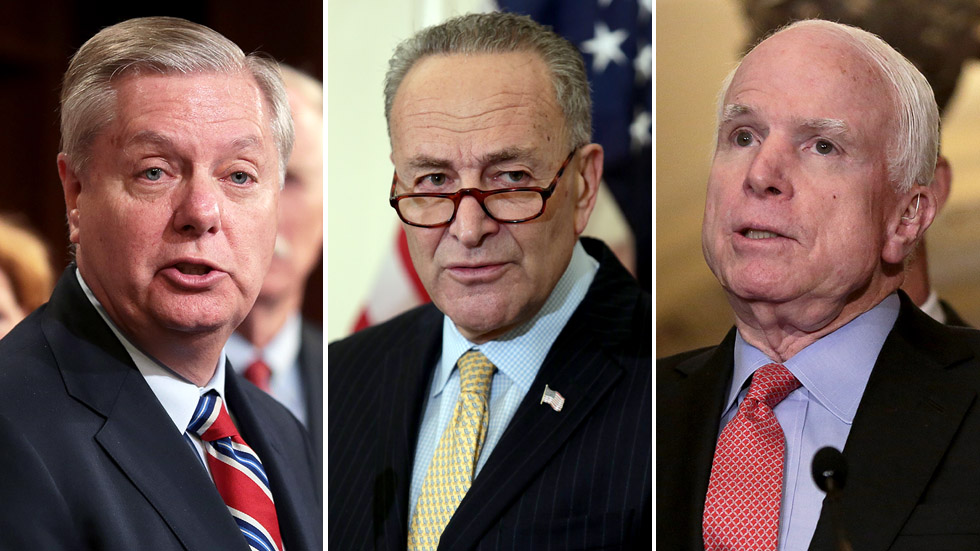 In the early morning hours of April 7, 2017, the Trump administration fired 59 Tomahawk cruise missiles from a U.S. destroyer in the Mediterranean Sea, at Shayrat Air Base in Syria, alleged to be the location from where the Assad government, on April 4, allegedly launched a chemical attack of sarin nerve gas which killed many civilians, including women and children, in the rebel-held town of Khan Shaykhun in Idlib province.

Trump undertook this act of war against the legitimate government of a sovereign state who has the support of Russia and China:

Trump justified the missile strike as being for the Syrian children allegedly killed by the alleged chemical sarin-gas attack. So it’s all the more ironic that his missile strike killed 18 civilians, including 5 children. (AFP)

Here are the prominent Americans who support Trump’s missile attack:

He who supported a third-party candidate against presidential candidate Trump, who finds Trump’s “America First” nationalism vulgar and embarrassing, who openly advocates a deep-state coup against President Trump — now approves of Trump risking WW3 by firing 59 Tomahawk cruise missiles at Syria, without even an investigation as to who’d actually deployed the sarin gas attack.

House Minority Leader Nancy Pelosi (D–CA) said, “Tonight’s strike in Syria appears to be a proportional response to the regime’s use of chemical weapons.” Senate Minority Leader Chuck Schumer (D–NY) said, “Making sure Assad knows that when he commits such despicable atrocities he will pay a price is the right thing to do.” (Wikipedia)

Senators John McCain (R–AZ) and Lindsey Graham (R–SC) said, “Unlike the previous administration, President Trump confronted a pivotal moment in Syria and took action. For that, he deserves the support of the American people.”

Yesterday, April 7, speaking to a crowd of supporters in Houston, Texas, Clinton applauds Trump’s missile strikes and urges him to undertake even more U.S. military action to take out Assad — and open America’s doors to Syrian refugees:

“The action taken last night needs to be followed by a broader strategy to end Syria’s civil war . . . . So I hope this administration will move forward [and] . . . recognize that they cannot in one breath speak of protecting Syrian babies and in the next close America’s doors to them.”

The Department of Defense asked for $2 billion over five years to buy 4,000 Tomahawks for the U.S. Navy in its fiscal 2017 budget last February.

I have a question for all the conservatives out there who support Trump’s missile strike against the Assad government:

Weren’t you adamantly AGAINST Obama wanting to attack Assad in 2013?

So what has changed to account for your enthusiastic support to attack Syria now?