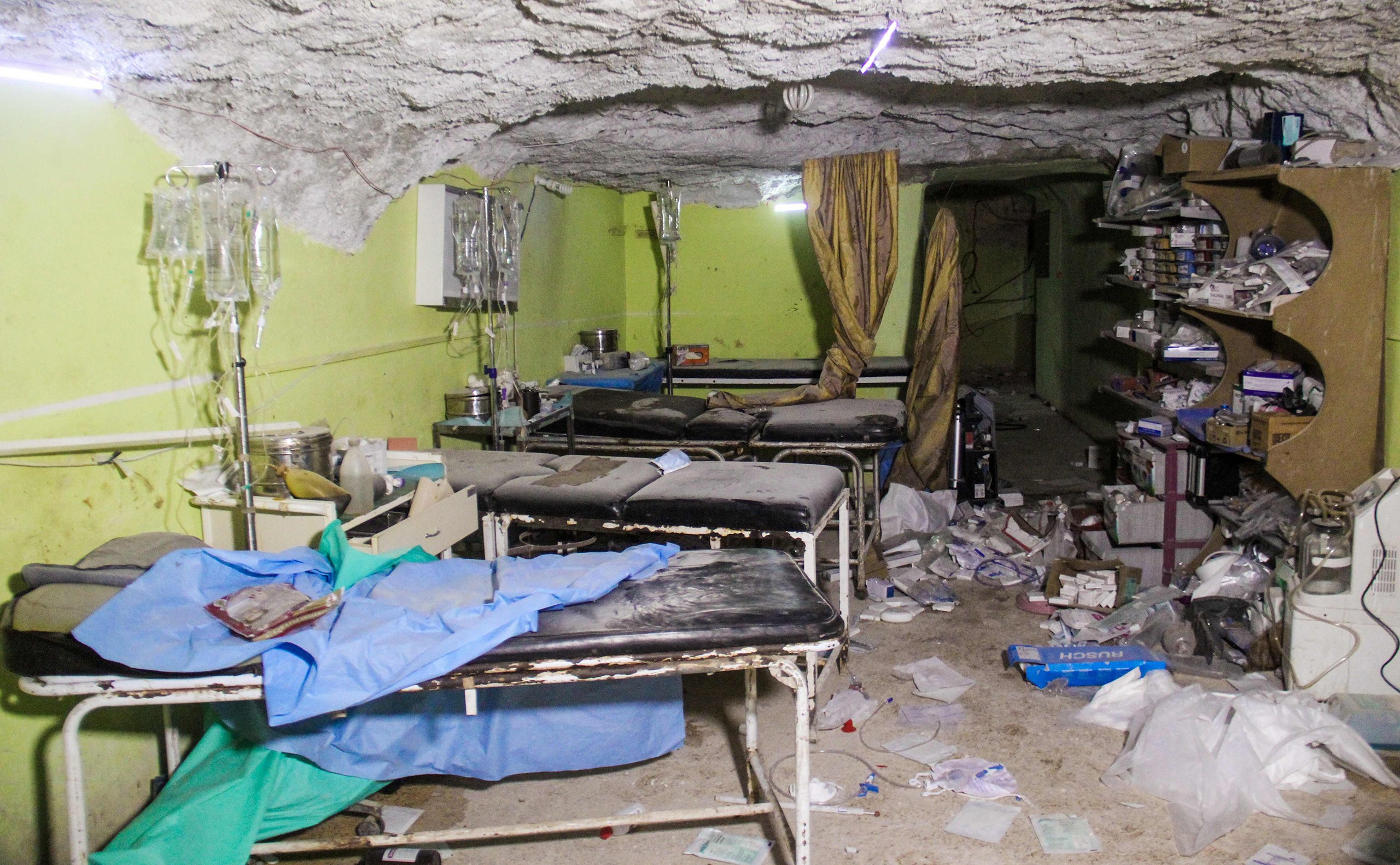 So what is the truth behind this chemical attack that never circulates the western media? Let’s examine footage never seen before in the West and the evidence regarding the latest chemical attack narrative from Syria to see who really is behind these alleged ‘chemical attacks’.

Firstly, let’s start with the politics. It was Turkish President Recep Tayyip Erdogan who has called on US President Donald Trump to back up his harsh words against Syria with actions, following the deadly chemical attack this week that left scores of people, including children dead.

“Trump said it was impossible to close your eyes against the Assad regime’s hateful actions. Thank you, but don’t limit yourself to comments, we need action,” Erdogan told Turkey’s Kanal 7 television.

“If it truly is a matter of actions, then Turkey is ready to take its responsibilities. We will not back down,” he said.

It was former US president Barack Obama who had also warned Syria that chemical attacks in the country’s civil war would cross a “red line”, but later refrained from taking military action against the regime.

As we stated several times, in the U.S. parties change but foreign policy doesn’t. So Trump complied to the Islamist’s request from Turkey by sending cruise missiles which were fired from a U.S. Navy vessel in the Mediterranean Sea. Their target was the airfield which serves as the base for the warplanes suspected of carrying out the chemical attack.

Two Republican senators are calling on President Donald Trump to take out Syria’s air force as part of a swift and forceful response.

“Hit this guy,” Graham said of Assad. “You’ve got my full permission.” John McCain of Arizona, who spoke to Trump on Wednesday, and Lindsey Graham of South Carolina said in a statement Thursday that Syrian President Bashar Assad “has crossed a line” and “must pay a punitive cost for this horrific attack.”

But what is the truth from the ground and what is going to be the results of all of this. Here, in Syria demonstrators that condemn the alleged chemical attack shout Al-Sha’b yurid Khilafa Islamiyeh. English: “the people want an Islamic Caliphate”:

But what is the truth behind this chemical attack that never circulates the western media that we obtained from Middle Eastern sources?

Khan Sheikhoun, where the attack happened was a hewn mountain with tunnels and impenetrable bunkers. Definitely a major hiding place for manufacturing weapon supplies for the Islamist rebels on a major scale. It is a “warehouse used to both produce and store shells containing toxic gas” as Russian Defense Ministry spokesman Major-General Igor Konashenkov said.

Photos of the place and a video combines both scenes from the attack. The old previous footage from Qatari TV aired on Al-Jazeera TV shows the inside of this fortress which no western media covered reveals this is a major weapon manufacturing depot:

The warehouse was used to both produce and store shells containing toxic gas. John Gilbert, a senior science fellow at the Center for Arms Control and Non-Proliferation, said the victims seen in video and photographs from Khan Sheikhoun “showed symptoms consistent with the nerve agent sarin.” Doctors Without Borders, which supports medical clinics in rebel-held areas, said Wednesday that eight patients brought to Bab Al Hawa hospital, located near the Turkish border, had exhibited symptoms “consistent with exposure to a neurotoxic agent such as sarin gas or similar compounds.”

A number of opposition activists in Khan Sheikhoun said their groups had had no rebel weapons facilities, though the town has long been a target of government warplanes.

However, Syrian journalist Nizar Nayouf quoted an unnamed doctor who told him there had been a storage area for the rebels in town.

“It contained a workshop … a section to store weapons and ammunition, and even foodstuffs and medical as well as logistical equipment,” said Nayouf in a message on social media Wednesday.

Indeed, the old footage of the same place filmed by Qatari media which you have seen above reveals exactly that.

Early U.S. assessments showed the use of chlorine gas and traces of the nerve agent sarin in the attack.

But who is the U.S. defending in their retaliation on Syria’s government and who is supplying these false narratives?

They are defending Jaysh al-Islam (Arabic meaning Army of Islam), formerly known as Liwa al-Islam (Brigade of Islam). This is a coalition of Islamist and Salafist units involved in the Syrian Civil War. The group along with Ahrar ash-Sham are the main rebel groups supported by Saudi Arabia. Liwa al-Islam was established by Zahran Alloush, the son of Saudi-based religious scholar Mohammed Alloush who is currently residing in Turkey and is aided by it.

One clue that reveal these knew of the attack prior to it happening was that Alloush blundered a tweet showing about the types of symptoms caused by the gas claiming it caused “heart failure for five hours”. It is possible however to have a coma because of the inhalation of chlorine gas and other chemicals. How he knew what chemical agent was used before any investigation remains a mystery.

Also, another source of these leaked reports is the social media accounts of Syrian propaganda journalist Feras Karam, who writes for the Syrian oppositionist website Orient News. Karam before the day of the attack tweeted all journalists to prep for the major media campaign to expose Syria’s use of chemical attacks. How would he have known of an impending attack prior to the event remains a mystery.

Text of the tweet states “tomorrow is the campaign coverage the extent of the air raids in Hama and the use of poisonous chlorine against civilians” Dated April 3, 7:06 PM. This was definitely before when the chemical incident happened.

All this plus other reports reveal Turkey was involved:

So now we come to the million dollar question that no serious ‘analyst’ can answer. The Syrian government has achieved significant gains, while its rebel adversaries are largely in disarray. It has taken back the cities of Aleppo and Homs, and was on the cusp of negotiating issues of aid and reconstruction with world powers under the aegis of the U.N. Assad was getting a clean slate. Why would Assad risk it all by carrying out a chemical attack?

Or is it that the rebels were done with and they needed an ace from under Turkey’s sleeve? In fact, just last week shoebat.com reported on how the US military, working in conjunction with Islamic rebel forces, has been blocking Syrian troops from attacking ISIS-held territory. And now, a week later, the US attacks Syria. Coincidence? You decide. The same policies that were conducted in the last administration are being continued in the current one. Why? Because it’s part of a plan that was configured by the CIA all the way back in the 80s (more on this in a future article).

As I wrote in 2014, the taking out of Soviet-influenced leaders — such a Saddam — was planned out years in advance, before even George W. Bush was president. According to US Army General Wesley Clark, in 1991, Paul Wolfowitz told him that the US had 5-10 years to “clean up those old Soviet client regimes, Syria, Iran, Iraq, before the next great superpower comes on to challenge us.”

Clinton was president when this plan was being discussed, and when Bush was in office, Saddam was toppled. Under Obama, Gaddafi and Mubarak were taken out, and the Assad regime was greatly diminished. Again, the change of presidency did not alter policy. We did a video to demonstrate that in America, presidents change, policy doesn’t.