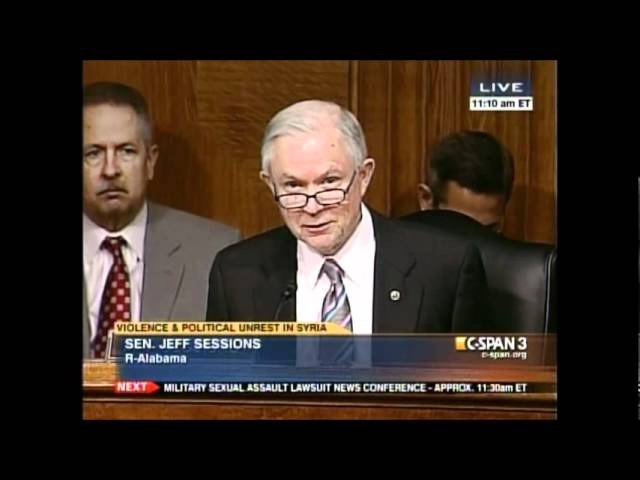 Back in 2012, then Senator Jeff Sessions chided then-Secretary of Defense Leon Panetta before the Armed Services Committee about the Obama administration acting unlawfully in Libya without coming to Congress. Sessions also questioned General Martin Dempsey asking what law the US military serves under. This should be brought out front in light of the recent missile attack authorized by the Trump administration in Syria.

First here’s the exchange between the three men.

To the question of what law Dempsey said that the US military serves under, he replied (and everyone should be shocked at his answer):

Sessions was quick to address him that neither NATO nor the United Nations is a legal basis in this matter.

Then, Sessions asked Panetta and Panetta was even more pitiful in his response that the US seeks international legal basis for war, like in Libya.

Keep in mind, that the Obama administration was tied in with Al Qaeda in Libya, just like they were the Islamic State in Syria.

Sessions was obviously not happy with the answers he was receiving and asked for some clarification. He asked Panetta if the DoD could establish a “no fly zone” in Syria without Congressional approval.

Panetta dodged the question and again said he just needed international approval and added that once that was established he would “decide” whether or not to get approval from Congress.

When asked what legal basis there would be for such an operation, Panetta said that NATO and UN resolutions were a legal basis. Those are not legal basis. International law DOES NOT trump the Constitution.

Following this unconstitutional action, Rep. Walter Jones introduced a resolution that was supposed to be the basis to impeach Barack Hussein Obama Soetoro Soebarkah if he used the military in that fashion again without authorization from Congress, and our Constitution states it is a declaration of war. That failed, and Obama should have been impeached for that one infraction.

Trump, following in the footsteps of Obama, has previously used the military without congressional approval in Yemen, as well as launching 59 Tomahawk missiles into Syria this week. Once upon a time, he knew this was unconstitutional.

The President must get Congressional approval before attacking Syria-big mistake if he does not!

Where is the legal basis for that? It isn’t in the Constitution because it demands that President Trump comes to Congress for a declaration of war.

Article II, Section 2, Clause 1 of the US Constitution states:

Where is that call issued from? It isn’t the Executive Branch. It comes from Congress (Article I, Section 8).

To declare war, grant letters of marque and reprisal, and make rules concerning captures on land and water;

To raise and support armies, but no appropriation of money to that use shall be for a longer term than two years;

To provide and maintain a navy;

To make rules for the government and regulation of the land and naval forces;

To provide for calling forth the militia to execute the laws of the union, suppress insurrections and repel invasions;

To provide for organizing, arming, and disciplining, the militia, and for governing such part of them as may be employed in the service of the United States, reserving to the states respectively, the appointment of the officers, and the authority of training the militia according to the discipline prescribed by Congress;

All of this is Congress’ duty, not the Executive. Furthermore, notice that this requires a declaration of war, something we have not had since World War II.

I have heard people tell me time and again that it isn’t a war, it was just taking out their airfield. Seriously, I have seen several people say that nonsense, to which I reply, “So, if Russia was to launch 50 missiles in a desert in the US where no one lives, would we consider that an act of war? Of course, we would. How much more unconstitutional can this action be?

Then, there are those who want to point to the War Powers Act. Seriously, I shake my head at this because the War Powers Act was specifically designed that if we came under attack, the President could not convene with Congress for approval and had 60 days to come before them, which would be obvious to everyone in Congress that an attack had occurred and the President would have acted constitutionally to defend the united States.

According to the Library of Congress:

Conceptually, the War Powers Resolution can be broken down into several distinct parts. The first part states the policy behind the law, namely to “insure that the collective judgment of both the Congress and the President will apply to the introduction of United States Armed Forces into hostilities,” and that the President’s powers as Commander in Chief are exercised only pursuant to a declaration of war, specific statutory authorization from Congress, or a national emergency created by an attack upon the United States (50 USC Sec. 1541).

The fourth part of the law concerns Congressional actions and procedures. Of particular interest is Section 1544(b), which requires that U.S. forces be withdrawn from hostilities within 60 days of the time a report is submitted or is required to be submitted under Section 1543(a)(1), unless Congress acts to approve continued military action, or is physically unable to meet as a result of an armed attack upon the United States. Section 1544(c) requires the President to remove U.S. armed forces that are engaged in hostilities “without a declaration of war or specific statutory authorization” at any time if Congress so directs by a Concurrent Resolution (50 USC 1544). Concurrent Resolutions are not laws and are not presented to the President for signature or veto; as a result the procedure contemplated under Section 1544(c) is known as a “legislative veto” and is constitutionally questionable in light of the decision of the United States Supreme Court in INS v. Chadha, 462 U.S. 919 (1983). Further sections set forth expedited Congressional procedures for considering proposed legislation to authorize the use of U.S. armed forces, as well as similar procedures regarding proposed legislation to withdraw U.S. forces under Section 1544(c) (50 U.S. 1545-46a).

The fifth part of the law sets forth certain definitions and rules to be used when interpreting the War Powers Resolution (50 USC 1547). Finally, the sixth part is a “separability provision” and states that if any part of the law is held (by a court) to be invalid, on its face or as applied to a particular situation, the rest of the law shall not be considered invalid, nor shall its applicability to other situations be affected (50 USC 1548).

You might say, “Well, it needed to be done because of the children involved.” First, is America, who continues a Holocaust of 60 million murdered babies in a position to take moral high ground when it comes to murdering children? I think not. Second, we are not even sure that the chemical attack was a real attack. Just take a look at all the Syrian “White Helmets” in the footage. We know they are Islamic jihadi propagandists. We should question all of it.

Furthermore, in 2011, Republicans in Nevada passes a resolution demanding that Congress enforce the War Powers Act against Obama for his actions in Libya. Here’s the text of that resolution.

WHEREAS, 50 U.S.C. § 1541, (c) requires the Commander in Chief to secure approval from Congress for such an act unless there has been: (1) a declaration of war, (2) specific statutory authorization, or (3) a national emergency created by attack upon the United States, its territories or possessions, or its armed forces.

WHEREAS, none of the above-stated criteria have occurred.

WHEREAS, Congress created the War Powers Resolution specifically to fulfill the intent of the Framers of the Constitution of the United States and ensure that the collective judgment of both the Congressand the President would apply to the introduction of United States Armed Forces into hostilities.

WHEREAS, President Obama prosecuting Operation Odyssey Dawn, now Operation Unified Protector, without the required Congressional statutory authorization, disregards the Rule of Law and Separation of Powers in our Constitution emphasized by Congress with the War Powers Resolution.

WHEREAS, Unchecked violation of laws sets a dangerous precedent for future governmental officials that must not be allowed.

WHEREAS, 50 U.S.C. § 1544, (c) provides, “…at any time that United States Armed Forces are engaged in hostilities outside the territory of the United States, its possessions and territories without a declaration of war or specific statutory authorization, such forces shall be removed by the President if the Congress so directs by concurrent resolution.”

THEREFORE BE IT RESOLVED, President Obama’s actions constitute a clear violation of 50 U.S.C. § 1541

BE IT FURTHER RESOLVED, Further, should President Obama fail to petition Congress for this authority, The Douglas County Republican Central Committee demands Congress censure President Obama for his flagrant violation of the law.

BE IT FURTHER RESOLVED, The Chair of the Douglas County Republican Central Committee will ensure a copy of this resolution, once approved, is signed and forwarded via fax to: President Obama, Speaker Boehner, Majority Leader Reid, Senator Heller, Congressman Heck, Congresswoman Berkley, House and Senate Clerks Offices.

Now, if men knew that about Obama, where are the cries about Trump? He is acting unconstitutionally and unlawfully in the attack and use of military against Syria. If it was an impeachable offense by Obama, it is an impeachable offense by Trump. Let’s stop playing this game as though Republicans are not as guilty of violating the Constitution as Democrats. Both do it constantly.

This is why it is important when we elect our leaders that they actually know the Constitution they swear to uphold and defend, not whether or not they are good businessmen.