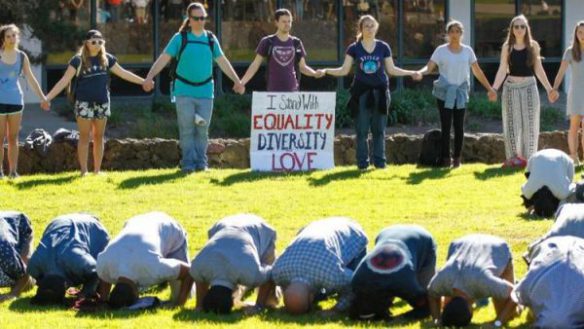 The photo speaks volumes. Look at the useful idiot girls holding hands while ALL Muslim men pray. Not one girl yelled, “where are the women?”

Jewish students are the most bullied, but there are no safe places or Judaism lessons in public school. Or for Christians, Hindus, Buddhists, etc. This is part of the escalation of the islamization of the workplace.

It is telling that the public school district is working with a designated terrorist group, CAIR.

This is nothing short short of surrender to an brutal, invading ideology.

San Diego Unified School District trustees have approved a plan to fight Islamophobia and bullying against Muslim students. Concerns about discrimination against Muslims have been expressed on many campuses this year, including at UCSD in the above photo.

San Diego Unified School District administrators and teachers will have calendars showing Islamic holidays, students will learn more about the religion in social studies classes and safe places will be created on campuses for Muslim students as part of a multi-tiered approach to combat Islamophobia.

Trustees on Tuesday voted 4-0, with board member Michael McQuary absent, to approve a plan to confront Islamophobia and bullying against Muslim students.

Stan Anjan, executive director of Family and Community Engagement at the district, said elements of the plan will be laid out before the end of the school year with a goal of having it in place at the start of the fall semester.

“It’s more of a comprehensive program, not just a curriculum,” he said. “We’re looking at it from a very integrated and holistic approach.”

One of the first steps in the plan will be to distribute letters to staff members and parents addressing Islamophobia and identifying resources to learn about the religion and fight discrimination. District calendars will be reviewed to ensure Islam holidays are recognized, which Anjan said is important so schools will schedule campus events that also can be attended by Muslim families.

Schools also will review and vet materials related to Muslim culture and history in media centers and provide resources and material for teachers.

Anjan said social studies lessons may include more information on prominent Muslims and their impact on history and other steps to promote a more positive image of Islam.

“Sometimes curriculum has had a much more Eurocentric approach,” he said. “We’re now thinking of how to diversify social studies curriculum.”

The plan also calls for a different approach in disciplining students who bully Muslim students. Rather than detention, the school will use a restorative justice method involving the student who did the bullying speaking with the other student to restore their relationship.

Community groups, parents, stake-holders and others outside the district also will be involved in the plan, Anjan said.

The roots of the plan date to November 2015, with the school board recognized the educational work of the Council for American-Islamic Relations, the largest American Muslim civil rights advocacy group in the country.

A report released by CAIR that year found 55 percent of American Muslim students surveyed in California said they were bullied because on their religion, which was twice as high as the national statistic of students reporting being bullied at school.

The report didn’t specify how many incidents were local, but the 165 students from San Diego County represented the largest group that participated in the survey.

Last July, the board directed the district staff to work with CAIR in developing a plan to address the issue.

Looking back to November 2015, Superintendent Cindy Marten said Tuesday that the issue of Islamophobia is even more important today.

The district doesn’t have data on how many students are Muslim, but Anjan’s report to the board Tuesday included a breakdown of incidents of bullying for various reasons from July 1 to Dec. 31, 2016.

The report showed seven bullying incidents because of religion, although it did not specific the faith. There were 36 reports were bullying because of race, the largest category, followed by 21 for sex, 11 for LGBTQ identity and seven for disabilities.

Following a presidential campaign season that saw now-President Donald Trump calling for a ban on Muslim immigrants, there have been anecdotal reports nationwide of confrontations and sometimes violent incidents against Muslims.

“There’s a sense of urgency around this work, especially post-election,” Anjan said.

Counselors and teachers in schools and colleges throughout the county have said Muslim students are feeling anxious these days, but Anjan said he’s also seen more students wanting to work to create more peaceful campuses.

“We’ve had students say they want to be leaders around equality issues,” he said.

Trustees were enthusiastic about moving ahead with the plan.

“When we create a climate where it’s OK to celebrate diversity and difference, then it makes all of our children safer,” said Trustee Kevin Beiser. “Not just the children who happen to be Muslim.”

Trustee John Lee Evans said the issue of Islamophobia and bullying against Muslim is greater today than when the board first called for a plan to address the issue.

“Now we have on a national stage where people openly discuss hatred and discrimination against various groups,” he said. We really need to redouble our efforts at a time like this.”

Tuesday’s meeting was attended by about 150 members of San Diego’s Muslim community, including Hanif Mohebia, executive director of the San Diego office of CAIR, who called the Tuesday night vote an important first step.

“If we do this right, San Diego Unified School District would be the leading school district in the nation to come up with a robust and beautiful anti-bully and anti-Islamophobic program,” he said. “I’m really happy we’re going toward the right direction. I am excited, but also careful and cautious because the work ahead is something we will all be responsible for.”