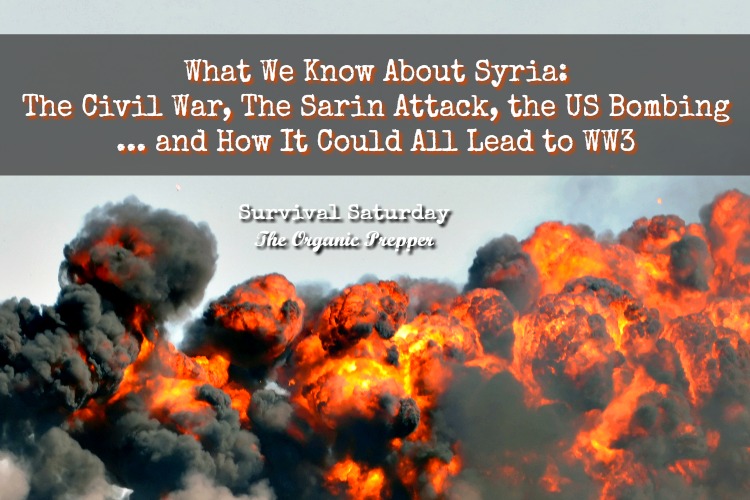 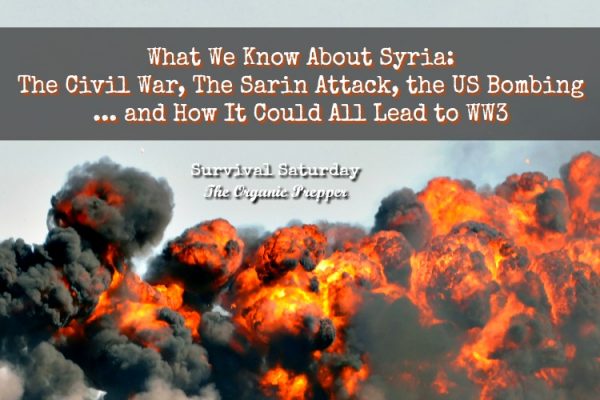 This Week in the News

This week on Survival Saturday, the big story is the increasingly volatile situation with Syria.

Just in case our nation wasn’t divided enough, we now have the actions that were taken in Syria.  Every story has many different facets, so today, you can find the links I’ve collected this week in an effort to figure out what the heck is going on.

My personal beliefs are anti-interventionist and anti-war, as those of you who are regular visitors to the site are aware. I’ve tried to provide a broad overview without a minimum of personal bias. This is why you’ll see conflicting sources in the collection of articles today. I hope you’ll find this information from separate sides of the many arguments surrounding this situation useful in forming your own analysis.

I strongly urge people to look for the common threads. Somewhere within those threads can we weave together the truth.

How things got started

The BBC has a timeline of events leading up to the current crisis. (Source)

The Syrian Civil War has been going on since March of 2011 when relatively peaceful protests against the government escalated into violence. (Source) The conflict began shortly after “Arab Spring” and an effort to unseat Bashar Assad, the leader of Syria was begun by the Free Syrian Army (FSA).

Here’s a video that has a lot of enlightening information.

But there were other players on the field, as you can see in this infographic from The Atlantic. When countries fight with each other via the politics of third parties, it’s called a “Proxy War.” Infographic via The Atlantic

How the US got involved

The United States began by supplying the FSA with non-lethal aid, like food and other supplies. President Obama overturned a ban on arming terrorists, and the US began training the rebels. It was later admitted that the United States also armed the FSA via the CIA.

Here are the links I used to provide the summary above:

Then, last week, horrifying video footage emerged of civilians dead or dying from a nerve gas attack that was said to be sarin. The United States government said that President Assad was responsible for the attack on his own people.

But was Assad actually responsible for the attack?

Dr. Ron Paul said on The Liberty Report that there was “zero chance” that Assad launched the sarin attack. Here are some quotes from the interview:

“Before this episode of possible gas exposure and who did what, things were going along reasonably well for the conditions,” the former Texas congressman stated. “Trump said let the Syrians decide who should run their country, and peace talks were making out, and Al Qaeda and ISIS were on the run.”

“It was never proven in fact,” agreed Ron Paul Institute for Peace and Prosperity executive director Daniel McAdams. “U.N. official Carla Del Ponte said it was most likely done by the rebels.”
​
“It makes no sense, even if you were totally separate from this and take no sides of this and you were just an analyst, it doesn’t make sense for Assad under these conditions to all of the sudden use poison gasses,” Paul continued. “I think it’s zero chance that he would have done this deliberately.” (Source)

Brandon Turbeville is an expert on the Syrian conflict. He’s been researching and writing about it for years. He is the author of The Road To Damascus: The Anglo-American Assault On Syria and Resisting The Empire: The Plan To Destroy Syria And How The Future Of The World Depends On The Outcome. As you can tell from those titles, he’s not a supporter of US intervention in Syria.

Back before Trump was elected, President Obama seemed to be doing everything possible to instigate war with Russia, including increased intervention in Syria. I wrote about this in several different articles.

Failed presidential nominee promised to institute a “no-fly” zone over Syria if she had been elected, something that could easily have been construed as an act of war. She seemed entirely likely to follow the pathway laid out by Obama and take us straight into WW3, something that caused many voters who weren’t Trump fans to grudgingly vote for him because they felt he was less likely than HRC to start a war. As well, during the election it appeared that Trump and Putin would be able to get along, a fact that spurred the whole “Russia rigged the election” narrative.

Until just recently, President Trump was completely against US intervention in Syria. Check out his tweets from a few years back denouncing President Obama’s involvement.

Then the US bombed Syria.

Unfortunately, the hopes for peace were dashed on April 4 when the United States sent 59 Tomahawk missiles to destroy an airfield in Syria. The target was the airfield from which the planes that delivered the sarin gas attack took off.

Here’s a quote from Trump’s official statement on the attack:

On Tuesday, Syrian dictator Bashar al-Assad launched a horrible chemical weapons attack on innocent civilians.  Using a deadly nerve agent, Assad choked out the lives of helpless men, women, and children.  It was a slow and brutal death for so many.  Even beautiful babies were cruelly murdered in this very barbaric attack.  No child of God should ever suffer such horror.

Tonight, I ordered a targeted military strike on the airfield in Syria from where the chemical attack was launched.  It is in this vital national security interest of the United States to prevent and deter the spread and use of deadly chemical weapons.  There can be no dispute that Syria used banned chemical weapons, violated its obligations under the Chemical Weapons Convention, and ignored the urging of the U.N. Security Council.

Sources say that everyone was warned so that the airfield could be evacuated.

But according to a Syrian news agency, nine civilians were killed in the US bombing. Four of them were children.

American reactions to the bombing are mixed.

And there are questions about whether Trump required Congressional permission.

The goal of the bombing was to destroy the base from which the Sarin gas attack was dispatched. However, yesterday, Syrian warplanes that had been removed from the base for the bombing were returned and took off from the not-so-ruined site.

Russia isn’t one bit happy about this turn of events.

Remember that whole thing above about how Trump and Putin were getting along? Well, not anymore. Russia is said to be livid about the US’s attack on Syria.

It’s entirely possible this action could lead to World War 3.

All of those folks – myself included – who believed that Trump was less likely than Clinton to get us into a war are sorely disappointed right now.  Same poo, different rear.

There isn’t a way to dial this back. The future depends on whether peace between Russia and the United States can be achieved, and at the moment, it isn’t looking good.

If you’ve ever thought about getting prepped but put it off, now is the time to get yourself in gear. This week, watch for my upcoming articles that focus on preparedness for this worst-case scenario.

Meanwhile, check out these resources:

Do you have any links you’d like to add to this? What are your thoughts? Please post your links in the comments section below and join the discussion. This is a heated topic, so let’s all strive to keep it civil and fill in the many blanks left by official sources.