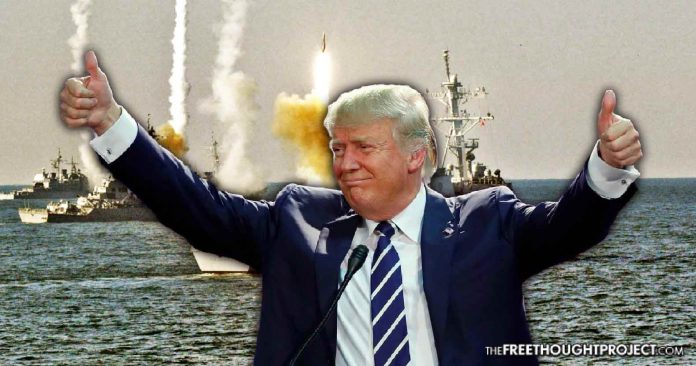 Dropping more bombs in Yemen in one week than the annual total for any prior year, or loosening the standards for “acceptable” civilian casualties, wasn’t enough for the war machine. Trump had to carry out his “first major military action” in Syria — as media figures gleefully stated — to earn accolades from the Establishment and the Deep State.

Hillary Clinton most likely would have carried out her “first major military action” in Syria at this point, too. Clinton was ready to pursue the establishment of ‘safe zones’ which would be a likely path for direct conflict with Russia.

Perhaps ‘safe zones’ or ‘no-fly zones’ will be on Trump’s teleprompter soon. Considering his call for increasing the already bloated military budget and giving the Pentagon – who’s never had an audit – much more control over what transpires in the various theaters of war, Trump should be very willing to accommodate American imperialism.

There was no shortage of fawning admirers in the corporate press, spanning the political spectrum, after the strike on Syria. Neoconservatives and liberal interventionists joined hands in praise of Tomahawk missiles, with Brian Williams gushing about how “beautiful” the missile strikes were.

Media have simply repeated the government’s line – without question – that US spies witnessed a Syrian plane dropping chemical weapons on a Syrian town. The media’s constant skepticism of Trump, deserved or not, suddenly disappears when he lets the missiles fly on Syria.

Granted, the Assad regime is certainly guilty of brutality and crimes, just as the Bush, Obama, Trump and Putin regimes are. But the accusation of chemical weapon use must be subject to the most intense scrutiny, and the mainstream media have clearly abandoned that role.

We should care about the veracity of the claim that ‘Syria did it,’ especially since the corporate press portrayed a 2013 sarin gas attack in Syria as a “red line” that required US military attacks. However, thanks to independent media and Seymour Hersh, we now know that gas attack more likely came from Syrian rebels.

And apparently, the New York Times – an important voice in the interventionist cabal – is no longer pushing the line that Assad carried out that 2013 chemical attack.

“The New York Times, which has never heard an allegation against Syrian President Bashar al-Assad that it hasn’t immediately believed, has compiled a list of his alleged atrocities with a surprising omission: the Aug. 21, 2013 sarin gas attack outside Damascus.

Why this omission is so surprising is that the sarin incident was the moment when the Western media and the Washington establishment piled on President Barack Obama for not enforcing his “red line” by launching military strikes against the Syrian government to retaliate for Assad “gassing his own people.”

The retaliation, which would have pummeled the Syrian military, was hotly desired by neoconservatives and liberal interventionists who were obsessed with achieving another Mideast “regime change” even if that risked turning Syria over to Al Qaeda and/or the Islamic State. The story of Obama’s supposed “red line” retreat has become a treasured groupthink of all the “important people” in D.C.”

While Saudi Arabia carries out war crimes in Yemen, bombing schools and hospitals in a proxy US ‘war on terror,’ the New York Times is intent on highlighting Assad’s bad behavior in Syria’s six-year civil war.

The Times had previously reported “slam-dunk proof of Assad’s guilt” in the 2013 sarin attack, but Parry notes that they backed away as the case fell apart. Seymour Hersh later found that the chemicals came from Turkish intelligence. Perhaps most revealing was that the likely firing position of the 2013 sarin attack was in rebel-controlled territory.

The question must be asked: who stands to benefit from a chemical attack? Assad or the “rebels,” which includes al-Qaida and ISIS-linked fighters? It also must be noted the attack and predictable Western response came about just as peace talks were getting underway in Brussels.

If the hallowed New York Times admits the 2013 chemical weapon attack didn’t come from Assad, why are the media once again parroting the government line that ‘Assad did it’ without question?

The military-industrial complex always gets its way, regardless of who occupies the Oval Office. Corporate media are jumping at the chance to beat the war drums once again.

Trump played his hand well, as the mainstream media will now do its duty as Praetorian Guard.