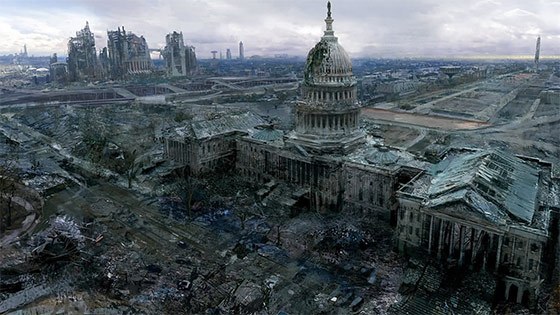 And that’s the real tragedy. We’ve been voting for peace for nearly 20 years now, and all we get is war.

That should really tell you something. It should tell you that our system doesn’t care about what the president stands for, or what the voters want. The system is never held accountable for anything, so there is nothing stopping it. One way or another, the deep state always gets its way. So if our government wants a war, then you can bet that we’re going to war.

That was made abundantly clear last week when President Trump ordered the bombing of an air base in Syria. The attack was so provocative, that the Kremlin went so far as to say that the US is now “only one step from war” with Russia. The man who was supposed to buck the system and drain the swamp; the man who promised to restore our relationship with Russia and pull back from brinkmanship, seems to have finally submitted to the warmongers in our government. The deep state’s plan to drag us into a horrible conflagration was only temporarily derailed by Trump, and now it appears that their plans are back on track.

But there’s a silver lining in all of this. Once you know that war is inevitable, and you accept that fact, you can have a pretty good idea of what’s going to happen next. You can finally take steps to prepare for it.

As for what to expect next, you can bet the farm that our economy is not going to survive the next major war, especially if it involves a conflict with Russia or China. Even if this war doesn’t turn into a nuclear slugfest, it’s going to obliterate the global economy and financial system.

For years Russia and China have been building an alternative to the dollar dominated financial system. They’ve built the BRICS financial bloc, they’ve been stocking up on gold, and they’ve been establishing trade agreements that don’t involve the dollar. When war breaks out, there’s going to be another system waiting in the wings to replace the dollar, which has been the world’s reserve currency for decades. The war will motivate China, Russia, and their allies, to pull the rug out from under the current economic paradigm.

Obviously that’s going to significantly weaken the value of the dollar, but it will be just the beginning. The cost of fighting this war will be astronomical. To give you an idea of how costly it will be, World War Two pushed our nation into the highest debt to GDP ratio that we’ve ever been in; a level we haven’t come close to again until very recently. Think about that. We have almost the same debt to GDP ratio as we had when we fought the most expensive and destructive war in our history. As the Wealth Research Group has already pointed out, the dollar is practically on life support. Our government is buried in debt and practically broke as it is, and the cost of fighting another world war would put us over the edge. We’d be bankrupt in no time at all.

When you consider all of this, one thing is absolutely clear. If Trump drags us into another major war, regardless of whether or not it is global in scope, the dollar is going to crash. It may not even survive in its current form. And when that happens, people are going to flee toward safe haven assets. You can rest assured that gold is going to make a comeback, the likes of which none of us have seen in our lifetimes.

The heavy hitters in the investment community have been predicting a dramatic change in the gold market for some time now. And unlike the general public, they weren’t persuaded into thinking that someone like Trump was going to save our country from collapse. For instance, Doug Casey of Casey Research; perhaps one of the most well-respected economic prognosticators, told Future Money Trends the following:

The one thing I feel very confident of is we’re going to have financial chaos in years to come and that’s going to drive people into gold and to a lesser degree into silver.

There’s absolutely  no reason from  fundamental point of view for bonds and stocks to be as high as they are right now… We’re in for a huge political, financial, demographic and military upset… these people might start World War III or seem like they’re trying to with the Russians… It’s a very dangerous situation.

He said that back in December, after Trump was elected but before he took office. Though he was optimistic about Trump, he clearly wasn’t convinced that he’d be able to prevent an economic collapse. Neither was Amir Adnani, the CEO of GoldMining Inc. Without even considering the possibility of war, he predicted that Trump’s policies would lead to a gold market rally.

So this is really an exceptional window and opportunity for us. We built a war chest with over $21 million of cash on hand, the very large resource base that we have, and that serves as a key point of drawing more companies to us who want to be part of the platform that we’re building. So this is a very interesting window for us; I believe this is a temporary window as well, because there’s no doubt in my mind that the policies of President Trump will prove to be very inflationary. And these very inflationary policies will drive real interest rates into the negative territory, and I really do believe that the stage is set for higher gold prices, but of course, these things take time to develop and manifest themselves.

But when you add war to the mix, it’s obvious that the dollar isn’t going to be able to maintain its current value. Our financial system is both fragile and under enormous pressure. It was already headed toward collapse, and the costs associated with another major war are going to expedite that process. When it happens, only the folks with real assets will be above water. Assets like land, weapons, food, and of course gold, will be the only things separating the haves from the have nots.