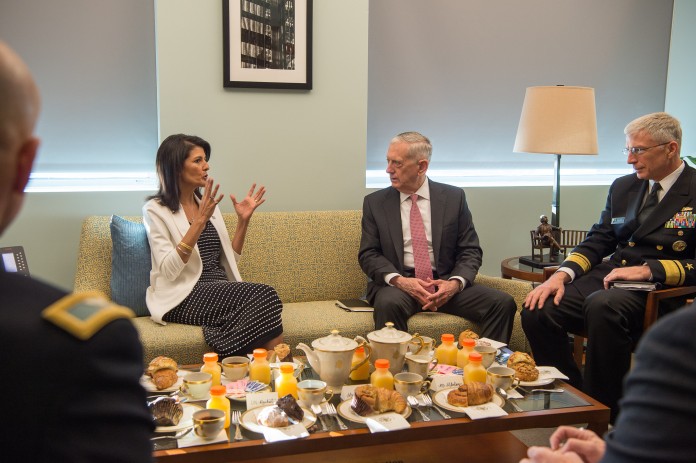 (INTELLIHUB) — U.S. Ambassador Nikki Haley has threatened further military action in Syria following the shocking missile strikes on an airbase inside the country in response to a chemical attack that some have blamed on the Assad regime.

“The United States took a very measured step last night,” Haley told the UN Security Council in an emergency session to discuss the bombing in Syria.

“We are prepared to do more, but we hope it will not be necessary.”

Noting that the Trump Administration was justified in carrying out the attack, Haley made clear that the United States no longer intends to stand by while only reacting to a chemical attack after it happens.

“The United States will no longer wait for Assad to use chemical weapons without any consequences,” Haley said. “Those days are over.”

The warning from the United States that more strikes could be on the way comes at the same time as the mainstream media, spearheaded by globalist mouthpiece CNN, is pushing a connection between the chemical attack and Russia.

“The US is investigating whether Russia was involved in the chemical attack in Syria that prompted President Donald Trump to launch the first direct military assault against the Assad regime,” CNN reported.

“The Pentagon is looking for any evidence that the Russian government knew about or was complicit in the attack in Idlib province that killed at least 80 people and injured dozens more, a senior US defense official said.”

That’s right, not only are globalists throughout the world cheering on the attack, the establishment media is using it to push for further conflict with Russia that could very well lead to World War III.

As I noted Friday night, many key questions about the chemical attack itself have yet to be answered.

“One has to wonder whether or not the chemical attack was actually carried out by the Assad government or if it was staged by some other unknown party in an attempt to force Trump into an attack he may have otherwise not supported. His supposed anti-interventionist policy was an important part of his campaign and this attack doesn’t seem to line up with that promise although observers on the outside may not have all the facts.”