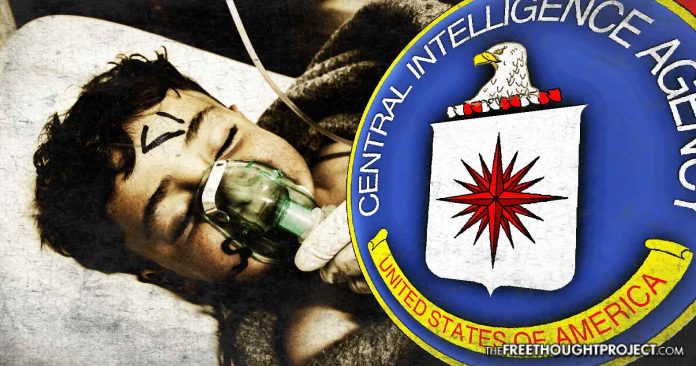 President Donald Trump’s fraught and highly illegal attack on Syria this week in retaliation for an equally disputed chemical ‘attack,’ in which as many as 86 people perished at the alleged hands of the Syrian Arab Army on the literal eve of peace talks is being criticized by experts and cagey politicians at every level of government — including former CIA officer Philip Giraldi.

That Russian forces or those of Syrian President Bashar al-Assad would gas to death scores of guiltless civilians is nothing short of a “sham,” according to grumblings within the U.S. Intelligence Community.

Trump managed this injudicious assault with 59 Tomahawk missiles on a sovereign nation without even the pretext of congressional approval, prior to cursory investigation, and in clear violation of domestic and international law, with results expectedly dire — including the deaths of at least nine civilians — four of them, children.

Others weren’t as quick to beat the Petro-Industrial Complex’s war drums — lampooning the reckless endeavor as an unjustified action based on unsubstantiated reports, and likely a war crime.

Worse, the whole affair reeks of the tidiness so oft characterizing a manufactured event — an issue award-winning investigative journalist and Consortiumnews editor, Robert Parry, posits could be the president’s ‘Wag the Dog’ moment.

In short, not everything is as cut and dry as Trump’s War Machine would prefer you believe.

Secretary of State Rex Tillerson did not have as strong a backing as implied, when, Thursday night, he claimed the U.S. Intelligence Community had assessed with a “high degree of confidence” Syrian government forces had unleashed a toxic chemical bomb against innocent civilians in Khan Sheikhoun in Syria’s Idlib Governate.

In fact, Parry notes, “a number of intelligence sources have made contradictory assessments, saying the preponderance of evidence suggests that Al Qaeda-affiliated rebels were at fault, either by orchestrating an intentional release of a chemical agent as a provocation or by possessing containers of poison gas that ruptured during a conventional bombing raid.

“One intelligence source told me that the most likely scenario was a staged event by the rebels intended to force Trump to reverse a policy, announced only days earlier, that the U.S. government would no longer seek ‘regime change’ in Syria and would focus on attacking the common enemy, Islamic terror groups that represent the core of the rebel forces.

“The source said the Trump national security team split between the President’s close personal advisers, such as nationalist firebrand Steve Bannon and son-in-law Jared Kushner, on one side and old-line neocons who have regrouped under National Security Adviser H.R. McMaster, an Army general who was a protégé of neocon favorite Gen. David Petraeus.”

That split manifested earlier in the removal as national security adviser, Ret. Gen. Michael Flynn, as well as the briefly contentious expulsion of Bannon from the National Security Council — both ousters, Parry says, fomented establishment neocon influence in Trump’s administration.

“Though Bannon and Kushner are often presented as rivals, the source said, they shared the belief that Trump should tell the truth about Syria, revealing the Obama administration’s CIA analysis that a fatal sarin gas attack in 2013 was a ‘false-flag’ operation intended to sucker President Obama into fully joining the Syrian war on the side of the rebels — and the intelligence analysts’ similar beliefs about Tuesday’s incident,” he explains.

Trump’s decision to proceed with a retaliatory operation, the source continued, came in part as a smoothing of ruffled feathers of hawkish Democrats who have for months bristled about possible collusion between the president’s campaign and, vaguely, Russian officials.

The remainder of support for the brazenly aggressive air assault came from a cadre who viewed Obama’s inability to gain congressional approval and failure to respond militarily to an ostensibly similar chemical attack on Ghouta in 2013, as a show of weakness.

Of course, judging by a dearth of evidence and certitude with which the West fingered Assad responsible, Ghouta appeared to constitute a blueprint for the incident at Khan Sheikhoun and all actions in its wake. [Except, this time, Trump jumped the starting gun, raining $110,330,000 in Tomahawks onto an evacuated air base and several innocent victims as ‘collateral damage’ — rather, slightly over $43 million, given as few as 23 missiles could be accounted for in the damaged targets on the ground in Syria.]

“In both cases – 2013 and 2017 – there were strong reasons to doubt Assad’s responsibility,” Parry continues. “In 2013, he had just invited United Nations inspectors into Syria to investigate cases of alleged rebel use of chemical weapons and thus it made no sense that he would launch a sarin attack in the Damascus suburbs, guaranteeing that the U.N. inspectors would be diverted to that case.

“Similarly, now, Assad’s military has gained a decisive advantage over the rebels and he had just scored a major diplomatic victory with the Trump administration’s announcement that the U.S. was no longer seeking ‘regime change’ in Syria. The savvy Assad would know that a chemical weapon attack now would likely result in U.S. retaliation and jeopardize the gains that his military has achieved with Russian and Iranian help.”

And that has been the question posed by independent journalists and outlets still doggedly committed — unlike their corporate media counterparts — to journalism with integrity:

What possible benefit would befall Assad for gassing to death his own people — almost immediately after the U.S. conceded his regime would remain in place?

For clarity on what likely took place behind the scenes, former CIA officer Philip Giraldi explained for Scott Horton’s Webcast the Intelligence Community did not give the Assad theory much credence — and, in fact, aligned more with claims from Moscow and Damascus a conventional Russian airstrike destroyed a cache of chemical weapons belonging to al-Qaeda, which sent poisonous gases downwind to the village.

“I’m hearing from sources on the ground in the Middle East, people who are intimately familiar with the intelligence that is available who are saying that the essential narrative that we’re all hearing about the Syrian government or the Russians using chemical weapons on innocent civilians is a sham,” Giraldi asserted.

“The intelligence confirms pretty much the account that the Russians have been giving … which is that they hit a warehouse where the rebels – now these are rebels that are, of course, connected with Al Qaeda – where the rebels were storing chemicals of their own and it basically caused an explosion that resulted in the casualties. Apparently the intelligence on this is very clear.”

Subdued tones might have dominated official public statements, but the deviation and distortion of information on the chemical poisoning to pin blame on the Syrian leader ignited such a firestorm of acrimony throughout the Intelligence Community, covert officials were pondering going public.

“People in both the agency [the CIA] and in the military who are aware of the intelligence are freaking out about this because essentially Trump completely misrepresented what he already should have known – but maybe he didn’t – and they’re afraid that this is moving toward a situation that could easily turn into an armed conflict.

“They are astonished by how this is being played by the administration and by the U.S. media.”

In the 1997 film, Wag the Dog, a widely disfavored president receives assistance from filmmakers who fabricate a humanitarian crisis out of thin air to deflect attention away from a burgeoning scandal. Even a casual observer can see the justification for Parry’s comparison of the film with Trump’s bizarrely aggressive act.

Unfortunately for those already killed and those yet in the path of the U.S.’ humanitarian bombs — and in contrast to crisis actors portrayed in Wag the Dog — the decimation and suffering in Syria is not cinema magic of a movie studio’s green screen.