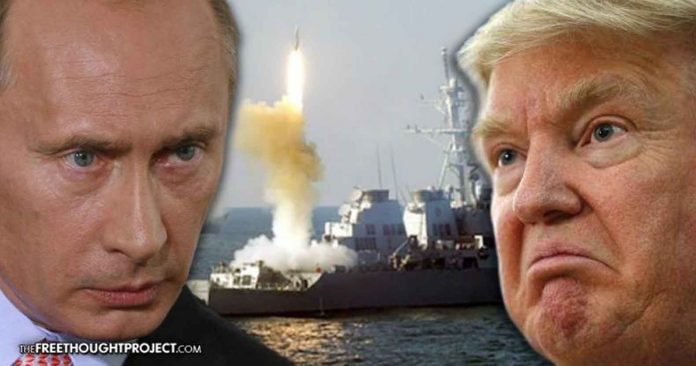 Geopolitical tensions have ratcheted up to a dangerous new level in the wake of the U.S. cruise missile strike on Syria, as Russia and Iran have warned the United States that they’ll “respond with force” if the US again crossed their “red lines” in Syria.

The joint statement made by the coalition backing the Assad government clearly noted that there would be a forceful response to any further attacks by the US, and, according to Reuters:

“What America waged in an aggression on Syria is a crossing of red lines. From now on we will respond with force to any aggressor or any breach of red lines from whoever it is and America knows our ability to respond well,” according to the Russia, Iran joint command center.

The strike on al Shayrat airbase, which the US claims Syrian forces used to conduct a chemical attack that killed over 70 people, was carried out unilaterally by the US, with President Donald Trump claiming that the strike was “representing the world.”

Russian President Vladimir Putin called the strikes a “violation of international law,” and called for an objective investigation into the chemical attack.

US politicians from both sides of the aisle, such as Senator Richard Black (R), Congresswoman Tusli Gabbard (D), and Congressman Thomas Massie (R) have strongly questioned the legitimacy of the ‘chemical attack by Assad’ narrative, noting that there is a strong likelihood the so called “moderate rebels,” who are actually terrorists, were responsible for the deaths and blamed it on the Assad government. Retired Col. Patrick Lang claims that “in the coming days the American people will learn that the Intelligence Community knew that Syria did not drop a military chemical weapon on innocent civilians in Idlib.”

According to his intelligence sources this is what actually happened:

There are members of the U.S. military who were aware this strike would occur and it was recorded. There is a film record. At least the Defense Intelligence Agency knows that this was not a chemical weapon attack. In fact, Syrian military chemical weapons were destroyed with the help of Russia.

Col. Lang went on to say, “This attack was violation of international law. Donald Trump authorized an unjustified attack on a sovereign country. What is even more disturbing is that people like Secretary of Defense Jim Mattis, CIA Director Mike Pompeo and NSA Director General McMaster went along with this charade. Front line troops know the truth. These facts will eventually come out. Donald Trump will most likely not finish his term as President. He will be impeached, I believe, once Congress is presented with irrefutable proof that he ignored and rejected intelligence that did not support the myth that Syria attacked with chemical weapons.”

Additionally, the Russian Ministry of Defense stated that legitimate Syrian air strikes against terrorist targets hit a warehouse used to produce and store shells containing chemical gas, which were allegedly being sent to Iraq.

On Sunday, the joint command center reiterated that the US cruise missile strike would not deter it from “liberating” Syria, and that the US military presence in the north of the country was essentially an illegal “occupation” of a sovereign country.

The establishment wants you to believe that Assad was so emboldened by Sec. of State Rex Tillerson saying this week Syrians should decide their own fate, that on the eve of major peace negotiations and while having the upper hand on the ground in the war, he decided it was time to start using banned chemical weapons in spite of the certain backlash and outcry that would come from the international community. One essentially has to believe that he threw all rational thought out the window.

The U.S. march to war, under the guise of humanitarian intervention — when there is no credible evidence of the Syrian military being behind the chemical gas deaths — is most certainly the mark of an imperial power looking to expand the empire’s geopolitical control.