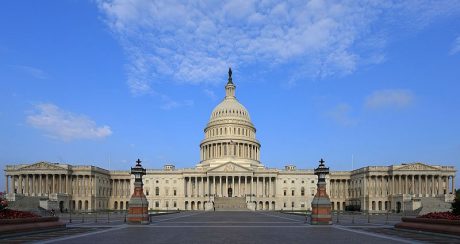 April 2017 could turn out to be one of the most important months in U.S. history that we have seen in a very long time.  On April 6th, Donald Trump attacked Syria on the 100th anniversary of the day that the U.S. officially entered World War I, and now at the end of this month we could be facing an unprecedented political crisis in Washington.  On Friday, members of Congress left town for their two week “Easter vacation”, and they won’t resume work until April 25th.  What this means is that Congress will have precisely four days when they get back to pass a bill to fund government operations or there will be a government shutdown starting on April 29th.

Up to this point, there has been very little urgency by either party to move a spending bill forward.  It is almost as if everyone is already resigned to the fact that a government shutdown will happen.  The Democrats will greatly benefit from a government shutdown because they can just blame the entire mess on the Republicans.  But for the GOP, this is essentially the equivalent of political malpractice.

To me, there is simply no way that Congress is going to be able to agree on a bill that funds the entire government in just four days.  And it turns out that this upcoming deadline comes exactly on the 100th day of Trump’s presidency…

The U.S. government is poised to shut down on Day 100 of Donald Trump’s presidency, unless Congress can pass a new spending bill or a continuing resolution before the current one expires on April 28.

Since Congress is currently on a two-week recess, there will be a sense of urgency to get a new bill passed once they reconvene on April 25. Leaders in both chambers would have four days to craft a new proposal that each side can agree on and get it on the president’s desk for Trump to sign.

If the Republicans control the White House, the Senate and the House of Representatives, why will it be so difficult to get an agreement on a spending bill?

Well, first of all, look at how difficult it was for the Republicans to agree on a bill to repeal and replace Obamacare.  At this point, it doesn’t look like that is going to happen at all.

More importantly, any bill to fund the government is going to require 60 votes in the Senate.  The “nuclear option” that the Republicans just used to push the Gorsuch Supreme Court nomination through is not available in this case under current Senate rules because a spending bill of this nature would not qualify.

So the Democrats have leverage, and they plan to use it to the maximum.  Senate Minority Leader Chuck Schumer is already promising to block any spending bill that includes funds for a border wall or that defunds Planned Parenthood…

The threat from Senate Minority Leader Chuck Schumer and other Democratic leaders sets up a climactic first showdown with the president, particularly with their inclusion of Trump’s signature border wall proposal.

“If Republicans insist on inserting poison pill riders such as defunding Planned Parenthood, building a border wall, or starting a deportation force, they will be shutting down the government and delivering a severe blow to our economy,” Schumer said in a statement.

Up until now, Trump hasn’t needed Democratic votes to stock his cabinet or advance the repeal of Obamacare, but a spending bill keeping the government open is subject to a 60-vote threshold in the Senate.

Do you understand what this means?

President Trump is going to be under an immense amount of pressure to end the government shutdown once it begins, but to do so will mean that he has to give up his goal of getting a border wall.

Do you think that Trump will just throw in the towel and forget about his beloved border wall after giving countless speeches promising one?

It is a game of chicken between Trump and the Democrats, and I don’t think that either side will give in easily.

Of even greater importance is the debate over the funding of Planned Parenthood.

Alternatively, Senate Minority Leader Chuck Schumer is vowing that his party will block any funding bill that attempts to defund Planned Parenthood in the Senate.

If Planned Parenthood is not defunded now, it never will be defunded.  This is one of the most pivotal moments in recent U.S. political history, and the outcome is going to have extraordinary consequences for our nation.

For those that are optimistic that there will not be a government shutdown, do you actually expect me to believe that this battle over the funding of Planned Parenthood will somehow get resolved in just four days?

Give me a break.

And of course there are dozens of other major issues that have to be resolved as well.  For example, Senator McCain is promising note to vote for any bill unless it includes an enormous increase in military spending, while many Senate Democrats would be very much against such a move.

I don’t see any way that a government shutdown is going to be avoided at this point, and the longer it goes on the more financial markets are going to get rattled.

Meanwhile, we continue to get even more signs that a substantial slowdown has begun for the U.S. economy.  Last week, we learned that only 98,000 jobs were added in March, and that was only about half of what most analysts were expecting.

And since it takes approximately 150,000 jobs a month just to keep up with population growth, that means that we are losing ground.

At the same time, the Atlanta Fed’s GDPNow forecasting model is now projecting that U.S. GDP growth for the first quarter of 2017 will be just 0.6 percent on an annualized basis.

That is absolutely pathetic, and as I have said before, I wouldn’t be surprised at all if we actually end up with a negative number for the first quarter.

And lots of other things are already happening which have not happened since the last recession.  For instance, this is the first time since the last financial crisis when there has been no growth for commercial and industrial lending for at least six months.

In addition, commercial bankruptcies spiked during the last recession, and now it is happening again…

Commercial bankruptcy filings, from corporations to sole proprietorships, spiked 28% in March from February, the largest month-to-month move in the data series of the American Bankruptcy Institute going back to 2012.

Of course consumer bankruptcies are rising at an alarming rate as well.  The following comes from Wolf Richter…

In December, bankruptcy filings rose 4.5% from a year earlier. In January they rose 5.4%. It was the first time consumer bankruptcies rose back-to-back since 2010. I called it “a red flag that’ll be highlighted only afterwards as a turning point.”

In March, consumer bankruptcy filings rose 4% year-over-year, to 77,900, the highest since March 2015, when 79,000 filings occurred, according to the American Bankruptcy Institute data.  The turning point has now been confirmed.

If you would like, I could keep talking about the bad economic news for a couple thousand more words.  U.S. credit card debt has just surpassed the one trillion dollar mark, a major crisis has arrived for the U.S. auto industry, thousands of retail stores are closing all over America, our pension funds are underfunded by trillions of dollars, and the U.S. national debt is now sitting at a grand total that is just shy of 20 trillion dollars.  The only reason that we have not crossed that 20 trillion dollar mark yet is because the debt ceiling deadline has already passed, and that is another thing that Congress needs to address very quickly if they want to avoid a major crisis.

Needless to say, the last thing that we need at this point is another war or two on top of everything else.

Unfortunately, a U.S. aircraft carrier strike group headed by the USS Carl Vinson is heading toward North Korea right at this moment, and Russia and Iran are promising to “respond with force” to any new U.S. attacks on Syria.  I will be writing quite a bit more about all of this on End Of The American Dream later today.

Those that were hoping for some sort of “reprieve” under Donald Trump can forget all about that now.  The pace of global events is really starting to accelerate, and the U.S. is already in a more precarious position than it was at any point in 2016.

The clouds have been building for a very long time, and now the storm is almost upon us.  I hope that you have been getting prepared, because a day of reckoning for the United States of America is closing in very rapidly.