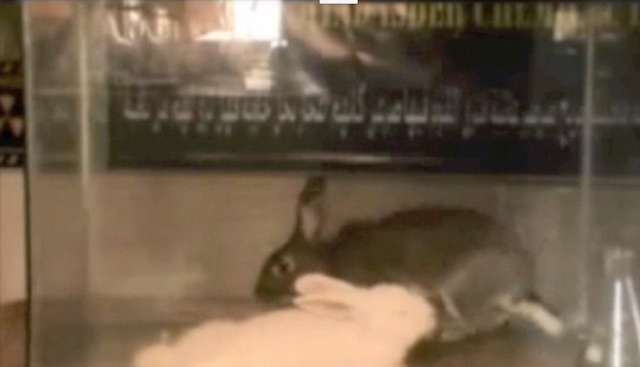 In 2012, Shoebat.com revealed how Islamic rebels in Syria were testing chemical weapons on rabbits before using them on human beings. Here is the video:

In the same 2012 report, we showed information from The Campaign to Return to Emergency Law which stated that the Islamist Al-Rih al-Sarsar Chemical Brigade in Syria, the one who tested the chemicals on the rabbits,

“carries out science experiments on animals by poisoning them, using toxic gases, and says the allies of the Syrian government will be poisoned just like the animals”

The chemicals used to kill the rabbits were produced by Tekkim, a chemical factory in Turkey. In the same report I wrote:

In 2013, the US government and much of the media were saying that Assad’s regime used sarin nerve gas civilians. It turned out to be that it was the rebels who used the chemical weapon, as shoebat.com confirmed (click here as well). As Shoebat.com had shown, an AP reporter documented how the chemical weapons were used by the rebels:

The U.S., Britain, and France as well as the Arab League have accused the regime of Syrian President Bashar al-Assad for carrying out the chemical weapons attack, which mainly targeted civilians. U.S. warships are stationed in the Mediterranean Sea to launch military strikes against Syria in punishment for carrying out a massive chemical weapons attack. The U.S. and others are not interested in examining any contrary evidence, with U.S Secretary of State John Kerry saying Monday that Assad’s guilt was “a judgment … already clear to the world.”

However, from numerous interviews with doctors, Ghouta residents, rebel fighters and their families, a different picture emerges. Many believe that certain rebels received chemical weapons via the Saudi intelligence chief, Prince Bandar bin Sultan, and were responsible for carrying out the dealing gas attack.

…the militant group Jabhat al-Nusra, which is linked to al-Qaida, announced that it would similarly attack civilians in the Assad regime’s heartland of Latakia on Syria’s western coast, in purported retaliation.

“When Saudi Prince Bandar gives such weapons to people, he must give them to those who know how to handle and use them,” she warned.

The US government currently is playing the same propaganda scheme, blaming a chemical attack on Assad, when it was more than likely the rebels who had those chemical weapons.