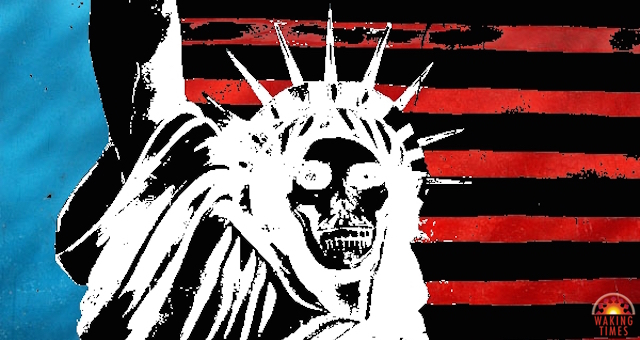 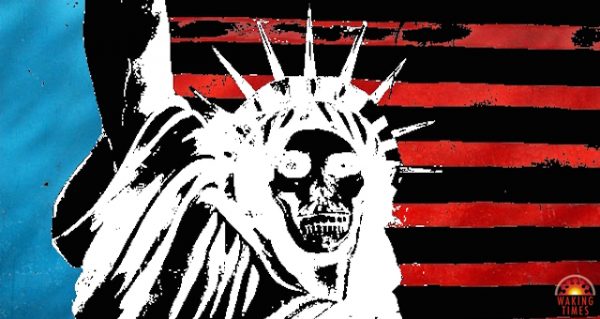 Of all the enemies to public liberty war is, perhaps, the most to be dreaded because it comprises and develops the germ of every other. War is the parent of armies; from these proceed debts and taxes… known instruments for bringing the many under the domination of the few.… No nation could preserve its freedom in the midst of continual warfare. — James Madison

In fact, it’s a wonder the economy hasn’t collapsed yet.

Indeed, even if we were to put an end to all of the government’s military meddling and bring all of the troops home today, it would take decades to pay down the price of these wars and get the government’s creditors off our backs. Even then, government spending would have to be slashed dramatically and taxes raised.

You do the math.

The government is $19 trillion in debt: War spending has ratcheted up the nation’s debt. The debt has now exceeded a staggering $19 trillion and is growing at an alarming rate of $35 million/hour and $2 billion every 24 hours.  Yet while defense contractors are getting richer than their wildest dreams, we’re in hock to foreign nations such as Japan and China (our two largest foreign holders at $1.13 trillion and $1.12 trillion respectively).

The Pentagon’s annual budget consumes almost 100% of individual income tax revenue. If there is any absolute maxim by which the federal government seems to operate, it is that the American taxpayer always gets ripped off, especially when it comes to paying the tab for America’s attempts to police the globe. Having been co-opted by greedy defense contractors, corrupt politicians and incompetent government officials, America’s expanding military empire is bleeding the country dry at a rate of more than $57 million per hour.

The government has spent $4.8 trillion on wars abroad since 9/11, with $7.9 trillion in interest: That’s a tax burden of more than $16,000 per American. Almost a quarter of that debt was incurred as a result of the wars in Iraq, Afghanistan and Pakistan and Syria. For the past 16 years, these wars have been paid for almost entirely by borrowing money from foreign nations and the U.S. Treasury. As the Atlantic points out, we’re fighting terrorism with a credit card. According to the Watson Institute for Public Affairs at Brown University, interest payments on what we’ve already borrowed for these failed wars could total over $7.9 trillion by 2053.

The government lost more than $160 billion to waste and fraud by the military and defense contractors: With paid contractors often outnumbering enlisted combat troops, the American war effort dubbed as the “coalition of the willing” has quickly evolved into the “coalition of the billing,” with American taxpayers forced to cough up billions of dollars for cash bribes, luxury bases, a highway to nowhere, faulty equipment, salaries for so-called “ghost soldiers,” and overpriced anything and everything associated with the war effort, including a $640 toilet seat and a $7600 coffee pot.

Taxpayers are being forced to pay $1.4 million per hour to provide U.S. weapons to countries that can’t afford them. As Mother Jones reports, the Pentagon’s Foreign Military Finance program “opens the way for the US government to pay for weapons for other countries—only to ‘promote world peace,’ of course—using your tax dollars, which are then recycled into the hands of military-industrial-complex corporations.”

The U.S. government spends more on wars (and military occupations) abroad every year than all 50 states combined spend on health, education, welfare, and safety. In fact, the U.S. spends more on its military than the eight highest-ranking nations with big defense budgets combined. The reach of America’s military empire includes close to 800 bases in as many as 160 countries, operated at a cost of more than $156 billion annually. As investigative journalist David Vine reports, “Even US military resorts and recreation areas in places like the Bavarian Alps and Seoul, South Korea, are bases of a kind. Worldwide, the military runs more than 170 golf courses.”

Now President Trump wants to increase military spending by $54 billion. Promising “an historic increase in defense spending to rebuild the depleted military of the United States,” Trump has made it clear where his priorities lie, and it’s not with the American taxpayer. As The Nation reports, “On a planet where Americans account for 4.34 percent of the population, US military spending accounts for 37 percent of the global total.”

Add in the cost of waging war in Syria (with or without congressional approval), and the burden on taxpayers soars to more than $11.5 million a day. Ironically, while presidential candidate Trump was vehemently opposed to the U.S. use of force in Syria, as well as harboring Syrian refugees within the U.S., he had no problem retaliating against Syrian President Bashar al-Assad on behalf of Syrian children killed in a chemical attack. The cost of launching a 59 Tomahawk missile-strike against Syria? It’s estimated that the missiles alone cost $60 million. Mind you, this is the same man, while campaigning for president, who warned that fighting Syria would signal the start of World War III against a united Syria, Russia and Iran. Already oil prices have started to climb as investors anticipate an extended conflict.

Clearly, war has become a huge money-making venture, and the U.S. government, with its vast military empire, is one of its best buyers and sellers.

Yet what most Americans—brainwashed into believing that patriotism means supporting the war machine—fail to recognize is that these ongoing wars have little to do with keeping the country safe and everything to do with enriching the military industrial complex at taxpayer expense.

The rationale may keep changing for why American military forces are in Afghanistan, Iraq, Pakistan and now Syria. However, the one that remains constant is that those who run the government—including the current president—are feeding the appetite of the military industrial complex and fattening the bank accounts of its investors.

In other words, in order to fund this burgeoning military empire that polices the globe, the U.S. government is prepared to bankrupt the nation, jeopardize our servicemen and women, increase the chances of terrorism and blowback domestically, and push the nation that much closer to eventual collapse.

Clearly, our national priorities are in desperate need of an overhauling.

Why throw money at defense when everything is falling down around us? Do we need to spend more money on our military (about $600 billion this year) than the next seven countries combined? Do we need 1.4 million active military personnel and 850,000 reserves when the enemy at the moment — ISIS — numbers in the low tens of thousands? If so, it seems there’s something radically wrong with our strategy. Should 55% of the federal government’s discretionary spending go to the military and only 3% to transportation when the toll in American lives is far greater from failing infrastructure than from terrorism? Does California need nearly as many active military bases (31, according to militarybases.com) as it has UC and state university campuses (33)? And does the state need more active duty military personnel (168,000, according to Governing magazine) than public elementary school teachers (139,000)?

Obviously, there are much better uses for your taxpayer funds than trillions of dollars being wasted on war. The following are just a few ways those hard-earned dollars could be used:

As long as “we the people” continue to allow the government to wage its costly, meaningless, endless wars abroad, the American homeland will continue to suffer: our roads will crumble, our bridges will fail, our schools will fall into disrepair, our drinking water will become undrinkable, our communities will destabilize, and crime will rise.

Here’s the kicker, though: if the American economy collapses—and with it the last vestiges of our constitutional republic—it will be the government and its trillion-dollar war budgets that are to blame.

Of course, the government has already anticipated this breakdown.

That’s why the government has transformed America into a war zone, turned the nation into a surveillance state, and labelled “we the people” as enemy combatants.

For years now, the government has worked with the military to prepare for widespread civil unrest brought about by “economic collapse, loss of functioning political and legal order, purposeful domestic resistance or insurgency, pervasive public health emergencies, and catastrophic natural and human disasters.”

Having spent more than half a century exporting war to foreign lands, profiting from war, and creating a national economy seemingly dependent on the spoils of war, the war hawks long ago turned their profit-driven appetites on us, bringing home the spoils of war—the military tanks, grenade launchers, Kevlar helmets, assault rifles, gas masks, ammunition, battering rams, night vision binoculars, etc.—and handing them over to local police, thereby turning America into a battlefield.

This is how the police state wins and “we the people” lose.

Eventually, however, as I make clear in my book Battlefield America: The War on the American People, all military empires fail.

At the height of its power, even the mighty Roman Empire could not stare down a collapsing economy and a burgeoning military. Prolonged periods of war and false economic prosperity largely led to its demise. As historian Chalmers Johnson predicts:

The fate of previous democratic empires suggests that such a conflict is unsustainable and will be resolved in one of two ways. Rome attempted to keep its empire and lost its democracy. Britain chose to remain democratic and in the process let go its empire. Intentionally or not, the people of the United States already are well embarked upon the course of non-democratic empire.

This is the “unwarranted influence, whether sought or unsought, by the military-industrial complex” that President Dwight Eisenhower warned us more than 50 years ago not to let endanger our liberties or democratic processes. Eisenhower, who served as Supreme Commander of the Allied forces in Europe during World War II, was alarmed by the rise of the profit-driven war machine that emerged following the war—one that, in order to perpetuate itself, would have to keep waging war.

We failed to heed his warning.

Yet as Eisenhower recognized, the consequences of allowing the military-industrial complex to wage war, exhaust our resources and dictate our national priorities are beyond grave:

Every gun that is made, every warship launched, every rocket fired signifies, in the final sense, a theft from those who hunger and are not fed, those who are cold and are not clothed. This world in arms is not spending money alone. It is spending the sweat of its laborers, the genius of its scientists, the hopes of its children. The cost of one modern heavy bomber is this: a modern brick school in more than 30 cities. It is two electric power plants, each serving a town of 60,000 population. It is two fine, fully equipped hospitals. It is some 50 miles of concrete highway. We pay for a single fighter with a half million bushels of wheat. We pay for a single destroyer with new homes that could have housed more than 8,000 people. This, I repeat, is the best way of life to be found on the road the world has been taking. This is not a way of life at all, in any true sense. Under the cloud of threatening war, it is humanity hanging from a cross of iron.

Wake up, America. There’s not much time left before we reach the zero hour.

Constitutional attorney and author John W. Whitehead is founder and president of The Rutherford Institute, where this article (When Government Evil Triumphs, Freedom Falls) was originally published. He is the author of A Government of Wolves: The Emerging American Police State and The Change Manifesto.

Do As I Unconstitutionally Say, But Do Not Do As I Hypocritically-Criminally Do! More Corrupt Politicians Playing Political Theatre
December 4th, 2020 Sons of Liberty Media