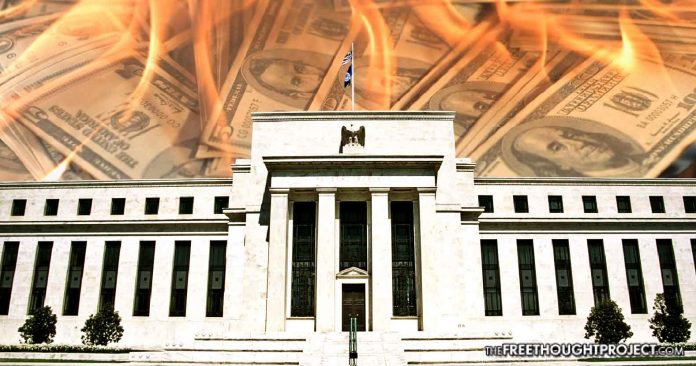 A bill recently introduced in Texas seeks to obliterate the Federal Reserve’s much-maligned monopoly on currency by establishing gold and silver as legal tender — but the groundbreaking legislation, if passed, would also prohibit those precious metals from being seized by State authorities.

If passed, Texans would secure stability by reclaiming their purchasing power — without being subject to the whims of The Fed — an institution widely regarded as a devious manipulator of currencies and markets.

Senator Bob Hall introduced the bill last month, which, the Tenth Amendment Center explains, “declares specifically that certain gold and silver coins are legal tender, and prohibits any tax, charge, assessment, fee, or penalty on any exchange of Federal Reserve notes (dollars) for gold or silver. The bill authorizes the payment of taxes and fees in gold & silver in certain circumstances. It would also prohibit the seizure of gold or silver by state authorities.”

Further subverting the current economy’s fealty to Dr. Ron Paul’s Enemy Number One, SB 2097, as the legislation is better known, would prevent any contracts explicitly to be paid in silver or gold to be instead paid with Federal Reserve notes — if you agree to pay in precious coins, you cannot then proffer payment in dollars.

Enforcing such contracts legally, the Tenth Amendment Center notes, would encourage their proliferation — and that of gold and silver coinage.

Texas law currently mandates all debts and taxes be paid in Federal Reserve Notes and coins issued by the Treasury — ironic, considering Article I, Section 10 of the U.S. Constitution states,

“No State shall … make any Thing but gold and silver Coin a Tender in Payment of Debts.”

It wasn’t until 1913, with the passage of the Federal Reserve Act — which only came after a concerted, covert campaign by U.S. banking magnates — that the loosely hybrid system placed massive control of money in the hands of Big Banks with little oversight from the government. But the ‘central banking’ system has failed to prevent further financial crises — and has been given even a greater chokehold and increased authority as compensation.

Where the public has no voice in the value of Federal Reserve Notes, Texans — and any states to follow its lead — could theoretically eschew using dollars, altogether, in favor of payment in gold and silver coins.

As it stands, officials of the Federal Reserve — a private institution — make decisions behind closed doors, where collusion and corruption can easily sway opinion away from the public’s, if not world’s, best interests.

Notably, the most efficacious watchdog against such practices in any given industry — an independent audit — has never been required of The Fed.

“While the debasement of the currency is the result of federal policy and banker collusion, the effect is broad and deep,” Tenth Amendment Center explains. “While there has been talk about reform, or at least an audit of the Fed, it is virtually a certainty that the federal government will never relinquish the power it enjoys through control of the monetary system. That said, there are practical steps that can be taken at the state level to promote the use and acceptance of sound money and undermine the Fed’s monopoly on money.”

If passed, Texas would join a smattering of states instituting sound money policies by returning gold and silver to a status as legitimate currency the metals have enjoyed throughout much of recorded history.

Should lawmakers side with the financial interests of Texans and pass this legislation, Texas would join Utah, which began recognizing gold and silver coins issued by the United States as legal tender in 2011.