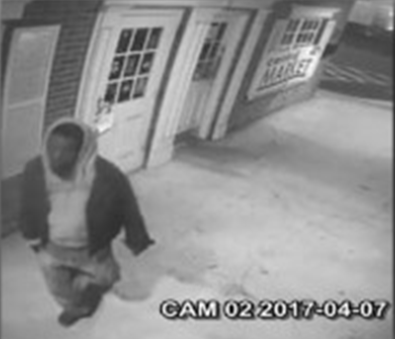 On April 7, 2017, someone set fire to Central Market on Albemarle in Charlotte, North Carolina, and left a note, signed “White America,” threatening the store owner, a refugee originally from Bhutan.

But surveillance video shows that the “white racist” Trump-supporter turns out to be a black man.

Alex Shabad reports for WCNC.com, April 7, 2017, that the letter references President Trump, then goes on to threaten the store owner, Kamal Dhimal, with torture if he doesn’t “go back where he came from”:

Our newly elected president Donald Trump is our nation builder for white America. You all know that, we want our country back on the right track. We need to get rid of Muslims, Indians and all immigrants. Specially (sic), we don’t want business run by refugees and immigrant any more (sic).

We are ready to wake up some of our great state including North Carolina and we will take care of the country. Immigrants and refugee are taking our job, doing our business and leaving us standard (sic). So, you are not allowed to do business any more (sic).

We know you are one and many of other immigrant doing business here. This is our warning. Leave the business and go back where you came from.

If you don’t follow this warning then we are not responsible for the torture starting now.

Although the arsonist’s letter was signed “White America,” police say the suspect is a black man who threw a brick through Central Market’s door, entered the store, and set the door on fire, inflicting more than $1,000 in damages.

CMPD says surveillance video of the incident shows a black male suspect, who is approximately 5-foot-8, around 200 pounds, has a short afro and goatee, and was wearing a gray hoodie under a black coat with light jeans and black shoes.

Meanwhile, Dhimal says he doesn’t know if he’ll reopen the store: “I’m here in this country to feel more secure, more safe, and more security, but yesterday I feel the same thing I have in my back home. I’m very sorry to say that.”

The FBI is also getting involved in the investigation. Detectives ask anyone with additional information about the incident to call Crime Stoppers at 704-334-1600.