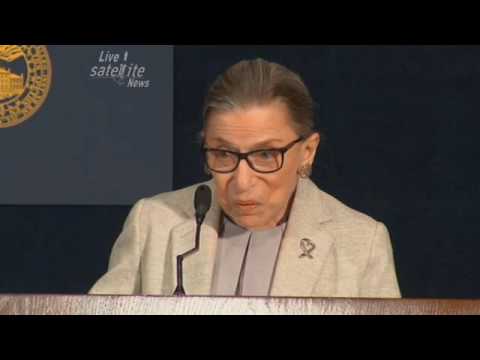 I’m sorry, but this is just too perfect, demonstrating that this is a woman that has no business on the Supreme Court, or it could mean she is absolutely right, or both. On Monday, Supreme Court Justice Ruth Bader Ginsburg referenced Senator Lindsey Graham (R-SC) as one of the “women of the Senate.”

Ginsburg, along with the late Justice Antonin Scalia were both honored with Allegheny College’s Prize for Civility in Public Life.

Ms. Ginsburg spoke about mutual respect among those of the court despite disagreements they have.

The 84-year-old justice recalled her and Scalia’s confirmation.

“I thought back to the 1993 confirmation of my nomination to the court—the hearing was altogether civil, the vote was 96 to 3,” Ginsburg said “For Justice Scalia, the vote was unanimous.”

Then came the moment where she referenced other Allegheny honorees.

“Let’s hope members of Congress, the members Allegheny College has already honored — Vice President Joe Biden and Sen. John McCain (R-AZ) — the women of the Senate, Sens. Dianne Feinstein (D-CA) and Lindsey Graham — let’s hope that they and others of goodwill will lead in restoring harmonious work ways,” Ginsburg said

The specific comments begin around the 3:30 mark.

Senator Graham cast his vote to confirm Judge Neil Gorsuch to replace Scalia on the court.

He was busy on Monday flying in a Lockheed Martin T-50A jet and meeting with the Ambassador of South Korea in South Carolina.

However, the Washington Examiner did provide an update from a spokesman from Allegheny college.

Steve Aaron, a spokesman representing Allegheny College, told the Washington Examiner that Ginsburg was not referring to Lindsey Graham as one of the “women of the Senate.” Instead, Aaron said Ginsburg was using mutually exclusive terms — referring to Graham and Feinstein as award winners from 2013 and the phrase “women of the Senate” to refer to the award winners of 2014.

Right, is this like the pitiful excuses given about Ginsburg’s drunkenness at the State of the Union?

Ginsburg called Senator Lindsey Graham a woman today… can't remain sober for a SOTU address. Is she able to actually remain on the court? pic.twitter.com/lqg1KD57IM