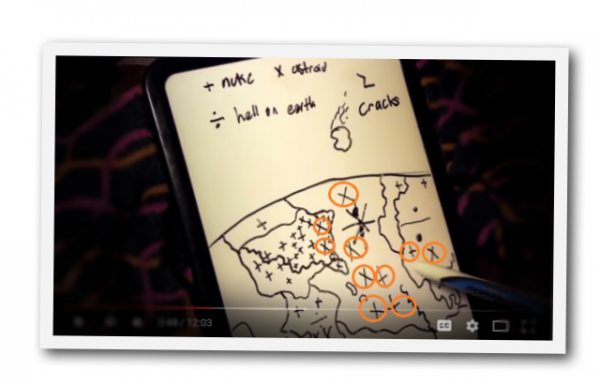 Did God give a 9-year-old boy a vision of the future of America?  Last night, my wife pulled me aside and strongly urged me to watch part of an amazing video that she had found on YouTube.  I was quite tired at the time, but I agreed to watch it because I could tell from my wife’s expression that she had found something special.  And without a doubt, what I am about to share with you does appear to be extraordinary.  A grandmother known as “A Daughter of The Highest King” on YouTube came across a dry erase board that her 9-year-old grandson had been drawing on, and the things that he had been drawing were so unusual that she decided to ask him about them.

Well, it turns out that this little boy had been trying to draw a picture of things that were shown to him in a vision.  When he received this vision he was in bed, but he was not asleep at the time.  He told his grandmother that in his vision he was standing in space and looking down at the Earth, and it appears that he may have been shown things that are coming in the future.  If you would like to watch the entire video, you can find it on YouTube here.

When I started watching this little boy describe his vision, one thing immediately jumped out at me.  He said that he saw a giant asteroid that appeared to be “flaming hot red” coming toward the Earth.
take our poll - story continues below
Completing this poll grants you access to DC Clothesline updates free of charge. You may opt out at anytime. You also agree to this site's Privacy Policy and Terms of Use.

As it got very close, he said that it appeared to break up into pieces and strike multiple locations, but according to him the main impact seems to have happened in the Atlantic Ocean.

When this little boy said that I was absolutely startled, because my wife and I have been collecting dreams and visions of a giant asteroid that is going to strike the Atlantic Ocean for many years.  In fact, my wife has collected more than 100 of these dreams and visions.  Many have seen that the asteroid breaks up into multiple pieces before it hits, and that the impact in the Atlantic Ocean causes an enormous tsunami that will be hundreds of feet high.  When this gigantic tsunami slams into the east coast of the United States at an extremely high speed, the devastation that will be caused will be almost too horrible for words.

As you can see in the video, this little boy is not even allowed on the Internet, and so he probably has never even heard about any of these dreams and visions.  But his description of the vision that he was given matches up perfectly with what dozens of other prominent men and women of God have received over the years.

And of course the Bible tells us that someday a giant object will plunge into the ocean.  The following is what Revelation 8:8-9 says in the Modern English Version…

8 Then the second angel sounded, and something like a great mountain, burning with fire, was thrown into the sea. A third of the sea became blood, 9 a third of the living creatures in the sea died, and a third of the ships were destroyed.

After the asteroid strikes, this 9-year-old boy was shown nuclear missiles flying all over the world, and many of them hit the United States.

Once again, this fits perfectly with what other men and women of God have been shown.  The great tsunami on the east coast comes first, and after that a nuclear conflict involving the United States happens.

In his vision this young boy was also shown “giant people with goat horns” roaming around.  Some have suggested that these could be demons on the Earth during the Great Tribulation, while others have suggested that what he saw may have been Nephilim.

We do know that things will get quite wild here on this planet during the Tribulation period.  I have always said that it is going to be crazier than the most insane science fiction movie that Hollywood can possibly come up with, and this youngster may have gotten a small glimpse of what life will be like during that time.

He also saw the planet breaking apart in various areas and a “giant crack in the middle of America”.  I have been warning about the great “megaquake” that is coming to the New Madrid fault zone for many years, but it is not clear from the video if that is exactly what he saw.

But I certainly do believe that this vision was from the Lord, and this would be perfectly consistent with Scripture.  In the Book of Joel, we are told that our sons and our daughters will prophesy in the last days.  This is what Joel 2:28-29 says in the Modern English Version…

Could this vision be a very small part of the fulfillment of that ancient prophecy that was given to the prophet Joel?

God is not sending us these warnings to frighten us.

Rather, God is sending us these warnings so that we will not be afraid.

God wants us to know that He knows everything that is going to happen in advance, He has a plan, He has everything under control, and He is not going to abandon us.

Yes, the most challenging times in all of human history are coming.  But for the people of God it will be the greatest chapter of all as multitudes come into the Kingdom even in the midst of all the shaking.

You were born for such a time as this, and now is the time for all of us to become the people that God created us to be.