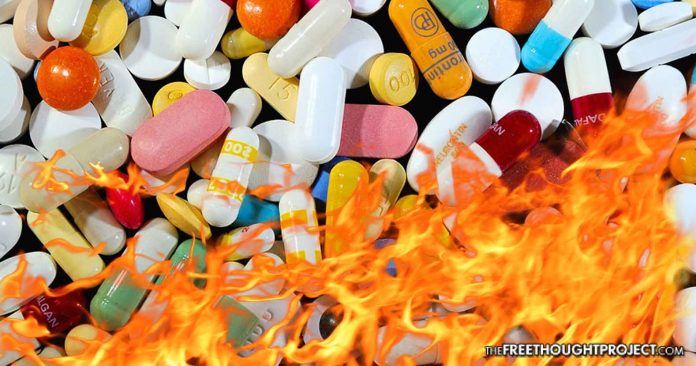 Those who follow the scandals of the pharmaceutical industry closely, and who have a knack for understanding their economics via the state-created monopolies granted to these companies, know the power these most unscrupulous companies often wield. We’ve seen companies use the power of the state to grant themselves monopolies on decades-old drugs, and, in turn, spike the prices to astronomical levels. However, we’ve never heard of an instance of pharmaceutical companies deliberately destroying life-saving products to force the state to raise the price of its drugs — until now.

Cancer drugs and their makers are often surrounded by controversy and conspiracy theory. However, they remain in high demand because people rely on them during their battles with cancer. This high demand, over the years, has created a higher supply and by a function of the market — even though it is a state controlled market — resulted in a lower price.

This natural function of the market apparently infuriated one of the world’s leading pharmaceutical companies. So, as appears to be the norm in the pharma industry, they took unethical and illegal action to change it.

According to a scathing report out of the London Times, who recovered leaked internal emails from Aspen Pharmacare, corruption is the norm and is even celebrated.

As the Independent reports:

Leaked internal emails appear to show employees at one of the world’s leading pharmaceutical companies calling for “celebration” over price hikes of cancer drugs, an investigation has revealed.

Staff at Aspen Pharmacare reportedly plotted to destroy stocks of life-saving medicines during a price dispute with the Spanish health service in 2014.

After purchasing five different cancer drugs from British firm GlaxoSmithKline (GSK), the company tried to sell the medicines in Europe for up to 40 times their previous price, reported The Times.

The price of Busulfan, a drug used to treat leukemia, rose from £5.20 to £65.22 in England and Wales after this move. Other drugs for fighting cancer quickly skyrocketed as well.

What do you do if your unscrupulous business practice of destroying product to manipulate the price of life-saving medicine pays off? Well, you celebrate, of course.

As the Independent reports:

According to The Times’s investigation, the company said it would stop supplying Italy with the drugs in October 2013 if authorities did not agree to price rises of up to 2,100 per cent in three months.

This all-powerful pharma company was essentially caught holding the government hostage in an unethical ploy to increase their bottom line.

Naturally, they were held accountable and those who facilitated this fraud were brought to task, right? Wrong.

A Department of Health spokesperson told the Independent that they are simply proposing more laws to “take action against excessive price rises on unbranded generic medicines.”

“No pharmaceutical company should exploit the NHS,” they said, reported MailOnline.

“We are working closely with the Competition and Markets Authority on unwarranted price rises of unbranded generic medicines, and where companies have breached competition law, we will seek damages and invest that money in the NHS.”

Sadly, these measures will likely be in vain.

As the Free Thought Project reported last year, Aaron Kesselheim, an associate professor of medicine at Harvard Medical School was the co-author of paradigm-shattering research on drug prices, which led to the Journal of the American Medical Association officially recognizing why drug prices skyrocket in America. Big pharma is granted a monopoly by the state which effectively eliminates their competition and allows them to charge any price they want — so they do.

The paper, published on August 23, The High Cost of Prescription Drugs in the United States: Origins and Prospects for Reform, set out to “review the origins and effects of high drug prices in the US market and to consider policy options that could contain the cost of prescription drugs.”

The companies who make these drugs are not beholden to any state, which makes this study applicable to the Aspen case as well.

What the paper’s authors, Harvard Medical School doctors Aaron Kesselheim and Jerry Avorn, and jurist Ameet Sarpatwari, found and subsequently admitted, shatters the very assertion that government regulation in the market is needed to keep medical care costs low. In fact, their findings were quite to the contrary.

“The most important factor that allows manufacturers to set high drug prices is market exclusivity, protected by monopoly rights awarded upon Food and Drug Administration approval and by patents.”

It seems Aspen also knows this as well, and has, like so many companies before them, chosen to game the system.