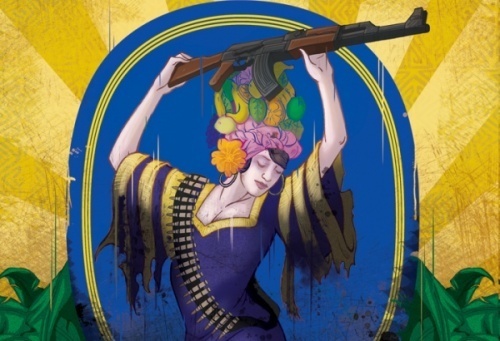 Chiquita Bananas had a jingle I memorized from television commercials as a child. Now, a lawsuit is exposing former Chiquita Banana Company executives for funding terror death squads in Colombia.

The lawsuit was filed on March 11 in the US District Court for the Southern District of Florida against former CEO of Chiquita Cyrus Freidheim and manager Charles Keiser.

The plaintiffs are identified only as John, Jane and Minor Does and are represented by Leslie Kroeger of Cohen Milstein Sellers & Toll.

“This case arises as a result of the actions of Chiquita Brands International, Inc., and its subsidiaries and affiliates (collectively, “Chiquita”), in funding, arming, and otherwise supporting terrorist organizations in Colombia in their campaign of terror against the civilian population of the Urabá region, in order to maintain its profitable control of Colombia’s banana growing regions,” reads the complaint. “Plaintiffs are family members of trade unionists, banana workers, political organizers, social activists, and others targeted and killed by terrorists, most notably the paramilitary organization United Self-Defense Groups of Colombia (Autodefensorias Unidas de Colombia, or AUC), between 1995 and 2004.”

“In order to produce bananas in an environment free from labor opposition and social disturbances, Chiquita, the Defendants Cyrus Freidheim and Charles Keiser, and other non-party individuals funded, armed, and otherwise supported the AUC,” the complaint continues. “The deaths of Plaintiffs’ relatives were a direct, foreseeable, and intended result of Chiquita’s illegal and tortious support of terrorist organizations.

The 155-page complaint claims that Chiquita made monthly payments to the AUC that totaled more than $1.7 million.

According to the plaintiffs, the payments were reviewed and approved by company executives, including those named in the lawsuit.

“Chiquita’s assistance helped the paramilitaries to consolidate as a decisive actor in the political, military, and social terrain of the banana region,” the complaint reads. “In exchange for its financial support to the AUC, Chiquita was able to operate in an environment in which labor and community opposition to their operations and policies was suppressed.”

Chiquita has already pleaded guilty in federal court of violating anti-terrorist laws in 2007.

The US designated the AUC as a terrorist organization in 2001, but the plaintiffs state that the company continued to fund them, even at the insistence of the company’s outside counsel.

“By arming and financing the AUC, Chiquita intended to benefit from the AUC’s systematic killings of civilians,” the complaint reads. “After its agreement with Chiquita, the AUC understood that one goal of its campaign of terror was to prevent work stoppages on banana plantations. … the AUC undertook an extensive campaign of murdering civilians in order to break the back of the unions.”

Among some of the violence the AUC committed, which were detailed in the complaint:

It also lists forced evictions and assaults of surviving family members by the AUC.

Courthouse News reports that this is not the first time that families have sought justice against Chiquita.