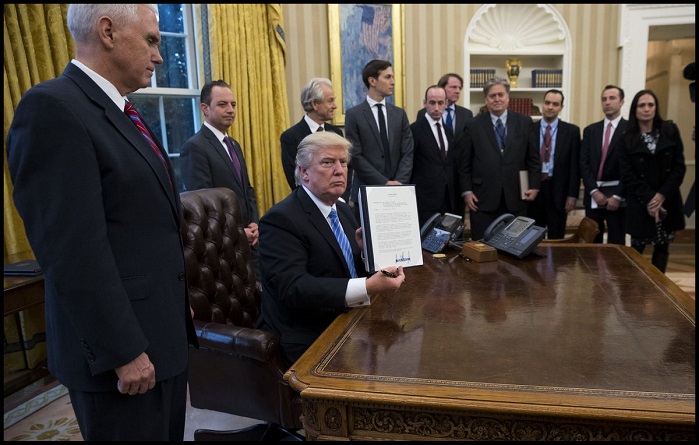 After passing the House and facing a tie-breaking vote in the Senate by Vice President Mike Pence, the bill was sent to Trump’s desk and he signed it.

Susan B. Anthony List President Marjorie Dannenfelser told LifeNews.com, “This week the pro-life movement had two huge victories: first, the swearing-in of Justice Gorsuch and now, President Trump will undo former President Obama’s parting gift to the abortion industry. The resolution signed today simply ensures that states are not forced to fund an abortion business with taxpayer dollars. Rather, states have the option to spend Title X money on comprehensive health care clinics that better serve women and girls.”

“We thank President Trump, Vice President Pence, who cast the tie-breaking vote last month, as well as the women who led this effort in Congress, Rep. Diane Black and Sen. Joni Ernst,” she added. “Prioritizing funding away from Planned Parenthood to comprehensive health care alternatives is a winning issue. We expect to see Congress continue its efforts to redirect additional taxpayer funding away from Planned Parenthood through pro-life health care reform after the spring recess.”

“State legislatures around the country have spoken out about their preference for prioritizing more comprehensive primary and preventative care providers for the receipt of Title X funding, and their voice should be respected by bureaucrats in the federal government,” wrote Senator Joni Ernst (R-IA) and Rep. Diane Black (R-TN.) in a joint op-ed for the Washington Examiner, “According to its 2014-2015 annual report, Planned Parenthood performed 323,999 abortion procedures in just one year. Taxpayers should not be forced to subsidize the abortion industry in this country. Nor should they be forced to foot the bill for an organization like Planned Parenthood that has displayed such blatant disregard for human life.”

“With a pro-life president in the White House and pro-life majorities in the House and Senate, we will continue to work together this year to undo the damage done by the Obama administration,” the two women wrote.

“Planned Parenthood which, according to their latest annual report, performed 323,999 abortions in a single year, does not need or deserve taxpayer dollars,” said Dannenfelser. “We thank Rep. Diane Black (R-TN) and Sen. Joni Ernst (R-IA) for leading the effort to overturn this unpopular rule. Their leadership reflects the truth that women largely support stopping taxpayer funding of the abortion industry and redirecting funds to centers that offer real health care.”

This didn’t stop Planned Parenthood from attacking the bill and President Trump.

Really? Whose health is being disregarded when Planned Parenthood engages in the merciless murders of the unborn, or even more, what about all of the women that end up seriously injured or even dead at the hands of abortion doctors?

Furthermore, Planned Parenthood is not entitled to any money from government. The people never gave Congress the authority to distribute that money to murder mills or any other “business.” Those that have been doing that for decades, be they Republican or Democrat, are acting criminally against the people and are complicit in the murder of more than 3,000 babies every day in our country.

I’m glad to hear that President Trump has signed this bill that recognizes the rights of the States in this matter to choke out Planned Parenthood. Now, let’s move on to full abolition of abortion and prosecution of those who engage in it.