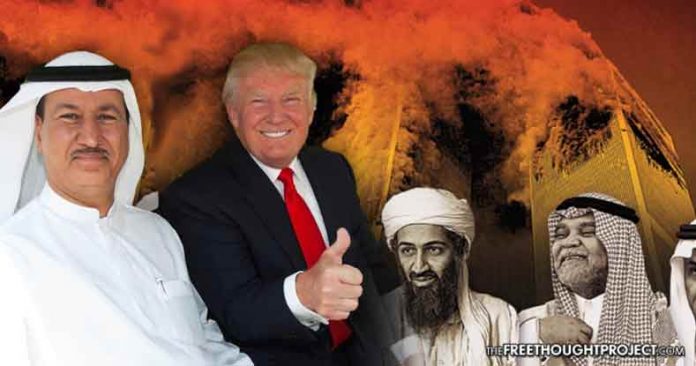 Sixteen years after 9/11, the U.S. remains in perpetual war against a tactic – aka the “war on terror” – bombing and invading sovereign countries with the unquestioning support of corporate media. In a truly Orwellian sense, America’s strongest Arab ally in the Middle Eastern rampage is Saudi Arabia, which also happens to be the world’s largest state sponsor of terrorism.

Sustaining the decades-old partnership with Saudi Arabia is essential to securing Western dominance in the Middle East, which means the U.S. supports the Sunni regime’s own aggression against Shia-governed countries such as Iran and Syria.

In a mutually beneficial relationship, the U.S. and Saudi Arabia bomb and destabilize rival Middle Eastern countries — furthering the goal of Pax Americana spelled out in 2000. Syria represents a significant Shia stronghold and resistance to the goal of Sunni dominance in the region; Syrian regime change would be welcome news for Riyadh.

If Syria becomes “liberated” by a U.S.-led war, Iran will be the final obstacle to the dream of unfettered Western-Sunni control over the Middle East. Saudi Arabia already has its Shia rivals on their knees in Yemen after intense bombing (including schools and hospitals) under the guise of fighting terror.

The U.S. government and its MSM allies have been adept at keeping the Saudi factor hidden from public discourse, but the release of “the 28 pages” in 2016 – detailing Saudi connections to the 9/11 attacks – shed some light on this nefarious situation.

As former Sen. Bob Graham stated, “The 28 pages primarily relate to who financed 9/11 and they point a very strong finger at Saudi Arabia as being the principal financier.” Indeed, the report shows that several figures in the Saudi Arabian government provided assistance to the 9-11 hijackers from within the U.S.

And this is likely just the tip of the iceberg on what really went down. As we know, there are several unanswered question about 9/11. Despite the questions and the possibility of deeper, multi-state involvement in 9/11, the U.S. has used the attack to lead a non-stop escalation of war and conflict.

But the 28 pages, as well as lobbying from the families of 9/11 victims, forced Congress to deal with the issue – resulting in the Justice Against Sponsors of Terrorism Act (JASTA) passed in Sept. 2016.

Now, thanks to JASTA, the largest lawsuit to date has been filed by U.S. insurers against Saudi entities for aiding and abetting the 9/11 attacks.

They were accused in the lawsuit of having “aided and abetted” the attacks through a variety of “activities in support of al Qaeda” in the years leading up to them.”

The insurers seek to recoup damages after large payouts for personal, property and business injuries from the 9/11 attacks – and their wording is quite direct.

“But for the assistance provided by defendants, al Qaeda could not have successfully planned, coordinated, and carried out the September 11th attacks, which were a foreseeable and intended result of their material support and sponsorship of al Qaeda.“

However, the Saudi regime should not be too fearful. A last-minute provision to JASTA allows the Justice and State departments to stay any lawsuits indefinitely if they simply “inform the judge hearing the case that the US government has engaged with Riyadh in diplomatic talks to resolve the issue.” So if the executive department wants to bury the lawsuit, it apparently can.

The insurers’ lawsuit comes less than a month after 800 families of 9/11 victims filed their own lawsuit against Saudi Arabia for aiding the 9/11 hijackers.

If anyone needs a reminder of how absurd the situation is in America, consider this. While the U.S. bombs sovereign countries in the interest of Saudi Arabia, the biggest state sponsor of terrorism, there are multi-billion dollar lawsuits against Saudi Arabia for aiding and abetting the 9/11 terror attacks.