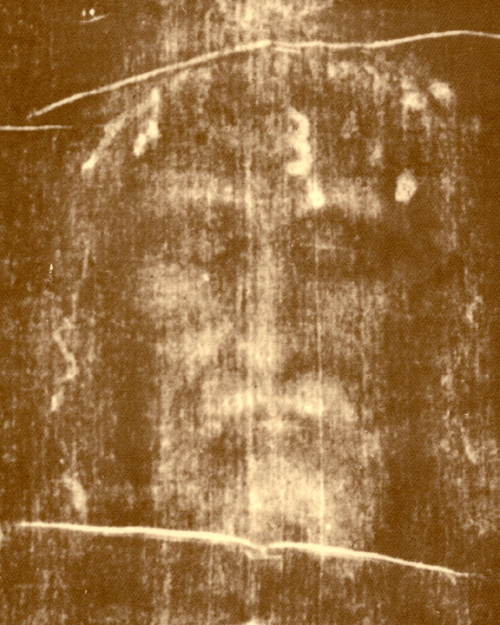 The Shroud of Turin is a rectangular 14 ft 5 in × 3 ft 7 in piece of woven flax cloth, believed by Christians to be the burial cloth of Jesus. The cloth bears the faint, brownish 3D imprint of the front and back view of the face and body of a bearded naked man — muscular and tall (various experts have measured him as from 5 ft 7 in to 6 ft 2 in). The imprint shows reddish-brown stains from wounds at the man’s wrist and pinpricks around his brow which are consistent with Christ’s wounds from being nailed to the cross and from the “crown of thorns” mockingly pressed onto his scalp.

To this day, scientists cannot account for how the image had been impressed on the cloth. They have dismissed the image being a painted or photographed image. A reigning hypothesis is that the image is the result of an intense blast of ultraviolet radiation.

Even those who don’t follow every development concerning the Shroud probably know that in 1988, carbon-14 dating tests performed on scraps taken from a corner of the Shroud dated it to the Middle Ages, between the years 1260 and 1390.

What is less known is a probable explanation for the dating — that in 1532, the Shroud had been damaged in a fire in the chapel where it was stored; Poor Clare nuns repaired the damage with patches; and the carbon-14 dating was performed precisely on a repaired patch, thereby skewing the test result.

Two discoveries in recent years lend support to that explanation, as well as to the authenticity of the Shroud as the burial cloth of our Lord Jesus Christ.

Doug Stanglin reports for USA Today, March 30, 2013, that a new test by scientists at the University of Padua in northern Italy, using the same fibers from the 1988 tests, dates the Shroud to between 300 BC and 400 AD, which would put it in the era of Christ.

The latest findings are contained in a new Italian-language book, Il Mistero Della Sindone (The Mystery of the Shroud), by Giulio Fanti, a professor of mechanical and thermal measurement at Padua University, and journalist Saverio Gaeta.

Marco Tosatti reports for Vatican Insider that the pollen that covers the Shroud corresponds to that of flowers used for funerals in Asia Minor 2000 years ago.

Marzia Boi, a university researcher at the University of the Balearic Islands and an expert in Palynology, the science that studies pollen, wrote:

“The pollen traces on the Holy Shroud which have so far been linked to the geographic origin of the relic reveal what oils and ointments were put both on the body and on the sheet. These discoveries have an ethno-cultural meaning linked to ancient funeral practices. These non-perishable particles capture the image of a 2000-year-old funeral rite and thanks to them it was possible to discover what plants were used in the preparation of the body that was kept in the sheet. The oils allowed the pollens, as fortuitous ingredients, to be absorbed and hidden in the shroud’s fabric like invisible evidence of an extraordinary historical event.”

Using a electron microscope, Boi identified the pollen on the Shroud as “from a plant called Helichrysum which is part of the Asteraceae family” (29.1%), Cistaceae pollen (8.2%), Apiaceae pollen (4.2%), and trace amounts of Pistacia pollen (0.6%). She writes:

“The list of pollens reveals traces of the most common plants used in ancient funerals . . . that followed the customs of Asia Minor, 2000 years ago. They are the components of the most precious oils and ointments of the time and have extraordinarily remained sealed in the [Shroud’s] fabric… The correct identification of the Helichrysum’s pollen, wrongly believed to be that of the Gundelia flower, confirms and guarantees that the body wrapped up in the sheet was an important figure.”

Jerome R. Corsi reports for WND, April 27, 2010, that scientists examining the Shroud of Turin since the restoration that began in 2000 have found a “second face” on its reverse “hidden side,” a discovery they believe adds evidence to the argument it is not a medieval painting or photographic rendering.

The second face image, also 3D, on the back of the shroud had been hidden for centuries, until the 2002 restoration when the Holland cloth – the backing cloth placed on the shroud by the Poor Clare Nuns to preserve it after the 1532 fire – was removed, permitting for the first time in centuries an examination of the back side.

In 2004, Professors Giulio Fanti and Roberto Maggiolo of the Department of Mechanical Engineering at the University of Padua in Italy published in the peer-reviewed Journal of Optics their study, “The Double Superficiality of the Frontal Image of the Turin Shroud.” They concluded there exists a second, even fainter face image on the backside of the Shroud of Turin, corresponding but not identical to the now-familiar face image of the crucified man seen in head-to-head dorsal and ventral views on the front side.

The researchers concluded that the image of the face on the backside of the shroud had neither been created by a photographic process nor by painting in which the facial image on the front “bled through” to create an image on the reverse side, because the front and back facial images are not identical and the center fibers show no image creation whatsoever.

Fanti and Maggiolo concluded the shroud image was created by a “corona discharge” — a radiant burst of light and energy that scorched the body image of the crucified man on the topmost fibers of the shroud’s front and back sides, without producing any image on the center fibers.

Daniel Porter, editor of ShroudStory.com, points out that images on the Shroud of Turin, at their thickest, are as thin as “slicing a human hair lengthwise, from end to end, into 100 long thin slices; each slice one-tenth the width of a single red blood cell.”

Here’s a video showing how the Man in the Shroud, with scratches and wounds cleaned and removed, might have appeared.