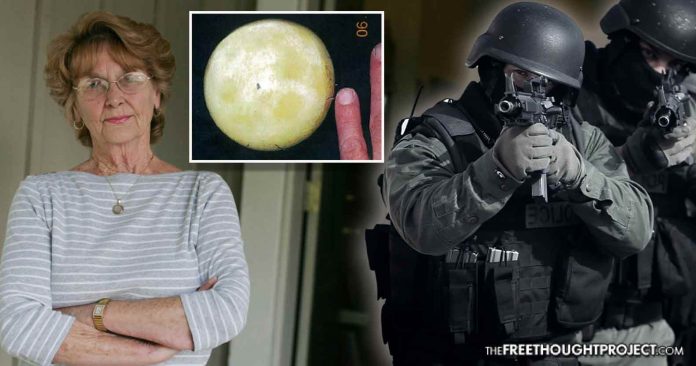 Lake Elsinore, CA — Here at the Free Thought Project, we’ve seen some outright insanity when it comes to the actions of government and the police state. However, a grandma being raided by a NASA police force so they can steal her dead husband’s moon rock, is definitely up there.

When Joann Davis was 75, she hit some hard financial times after finding herself raising grandchildren following her daughter’s death and her son’s illness. So, being the resourceful grandmother that she is, Davis began to think of ways to earn some extra cash.

Then it hit her.

Her first husband, Robert Davis worked as an Apollo 11 engineer, and he saved a paperweight with moon material and another with a bit of the heat shield. Joann, who also worked for the space program at the time, came up with the idea that she’d ask NASA if they’d like to buy it from her, so she could raise some funds to feed her grandchildren.

Well, to most people with common sense, this is a great idea. However, to the American police state, it’s a felony. Now, Davis is attempting to sue officials for the brutal and humiliating treatment she endured at the hands of NASA agents.

The lead agent “organized a sting operation involving six armed officers to forcibly seize a Lucite paperweight containing a moon rock the size of a rice grain from an elderly grandmother,” wrote Judge Sidney Thomas of the 9th US Circuit Court of Appeals in the recent decision allowing Davis to sue, per the Los Angeles Times.

Instead of telling Davis that it is against the law to sell moon rocks (yeah, we didn’t know that either), NASA set up an elaborate sting operation to nail this grandma — turned would be international moon rock fence — to the wall.

While Davis became excited to think that she’d finally get some financial padding by selling this moon rock, armed NASA agents were plotting away to take her down.

The sting would take place at a local Denny’s restaurant. These brave cops must’ve obviously known they were dealing with a hardened criminal when she asked to meet them at Denny’s.

The armed NASA agents then raided the Denny’s and forcibly restrained the dangerous 75-year-old grandma and her second husband who was along for the trade.

As they heroically protected society from the likes of a poor grandmother trying to support her dead child’s children, officers refused to allows Davis to use the bathroom. They forced her to defecate in her pants. Heroic indeed.

As Mercury News reports, Davis stood in the parking lot of a Denny’s restaurant in pants soaked in urine, answering questions from a federal agent about a rice-sized piece of moon.

“In the end, Ms. Davis spent her whole life proudly working for aerospace and the government, only to be jumped by a NASA-organized swat team because someone in NASA made a mistake and wanted to get it back,” said Davis’ Redlands-based lawyer, Peter Schlueter. “And they did it in a way that humiliated her.”

As authorities made the case against the moon rock-dealing elderly woman, they likely garnered the attention of prosecutors on the way through the system. Eventually, those prosecutors would drop the case against Davis. However, not before she’d be arrested and brutally humiliated by NASA agents.

In this week’s ruling, according to Newser, the judges said Davis made a case that the detention violated her constitutional right regarding unreasonable seizure. She is suing agent Norman Conley, who “had no law enforcement interest in detaining Davis for two hours while she stood wearing urine-soaked pants in a restaurant’s parking lot during the lunch rush,” wrote Thomas.

In what world would it be considered in the interest of public safety to organize a sting operation, carried out by a team of armed agents, to kidnap and cage a woman for selling her dead husband’s moon rock to feed her grandchildren? Well, apparently, this world.

As Mercury News reports, Davis’ son died seven months after the incident. If Davis, who will be 80 next month, is successful in her suit, she says she would like to build a picnic area at Whitefish Lake in Montana as a memorial to both her son and her daughter.