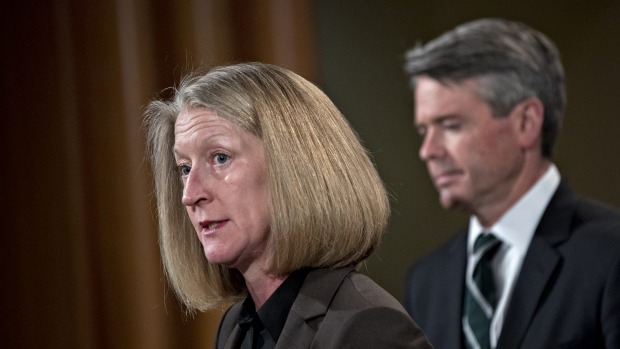 Three weeks ago, on March 29, 2017, Candace Marie Claiborne, 60, became the first Clinton-era State Department employee to be indicted by a federal grand jury on treason charges — conspiring to defraud the U.S. government, concealing contact and pay-to-play schemes with foreign spies, obstructing an official proceeding, and making false statements to the FBI.

According to YourNewsWire, prosecutors warn Claiborne is “the first of many” corrupt Clinton-era State Department employees who will be brought to justice by a reinvigorated Department of Justice in the Trump administration.

In a press release on March 29, 2017, the DOJ’s Office of Public Affairs announced the March 28 arrest and indictment of U.S. Department of State employee Candace Marie Claiborne for:

The federal charges against Claiborne were announced by:

“Candace Marie Claiborne is a U.S. State Department employee who possesses a Top Secret security clearance and allegedly failed to report her contacts with Chinese foreign intelligence agents who provided her with thousands of dollars of gifts and benefits. Claiborne used her position and her access to sensitive diplomatic data for personal profit. Pursuing those who imperil our national security for personal gain will remain a key priority of the National Security Division.”

“Candace Claiborne is charged with obstructing an official proceeding and making false statements in connection with her alleged concealment and failure to report her improper connections to foreign contacts along with the tens of thousands of dollars in gifts and benefits they provided. As a State Department employee with a Top Secret clearance, she received training and briefing about the need for caution and transparency. This case demonstrates that U.S. government employees will be held accountable for failing to honor the trust placed in them when they take on such sensitive assignments.”

“Candace Claiborne is accused of violating her oath of office as a State Department employee, who was entrusted with Top Secret information when she purposefully mislead federal investigators about her significant and repeated interactions with foreign contacts. The FBI will continue to investigate individuals who, though required by law, fail to report foreign contacts, which is a key indicator of potential insider threats posed by those in positions of public trust.”

According to the affidavit in support of the complaint and arrest warrant, Claiborne began working as an Office Management Specialist for the Department of State in 1999. She has served overseas at a number of posts, including embassies and consulates in Baghdad, Iraq, Khartoum, Sudan, and Beijing and Shanghai in China. As a condition of her employment, Claiborne maintains a Top Secret security clearance. Claiborne also is required to report any contacts with persons suspected of affiliation with a foreign intelligence agency.

Despite such a requirement, the affidavit alleges, Claiborne failed to report repeated contacts with two intelligence agents of the People’s Republic of China (PRC), even though these agents provided tens of thousands of dollars in gifts and benefits to Claiborne and her family over five years, including cash wired to Claiborne’s USAA account, an Apple iPhone and laptop computer, Chinese New Year’s gifts, meals, international travel and vacations, tuition at a Chinese fashion school, a fully furnished apartment, and a monthly stipend. Some of these gifts and benefits were provided directly to Claiborne, while others were provided through a co-conspirator.

Claiborne noted in her journal that she could “Generate 20k in 1 year” working with one of the PRC agents, who, shortly after wiring $2,480 to Claiborne, tasked her with providing internal U.S. Government analyses on a U.S.-Sino Strategic Economic Dialogue that had just concluded.

The maximum penalty for a person convicted of obstructing an official proceeding is 20 years in prison. The maximum penalty for making false statements to the FBI is five years in prison. If convicted of any offense, the sentencing of Claiborne will be determined by the court based on the advisory Sentencing Guidelines and other statutory factors.

At her court appearance on March 29, Claiborne pleaded not guilty before the Honorable Magistrate Judge Robin M. Meriweather. A preliminary hearing is set for April 18.

The FBI’s Washington Field Office is leading the investigation into this matter. The case is being prosecuted by Assistant U.S. Attorneys John L. Hill and Thomas A. Gillice for the District of Columbia and Trial Attorney Julie Edelstein of the National Security Division’s Counterintelligence and Export Control Section.

When she was Obama’s secretary of state, Hillary Clinton, too, betrayed the public trust of her Top Secret security clearance, as well as engaged in pay-for-play schemes with foreign governments and individuals via her Clinton Foundation. Let’s hope Candace Marie Claiborne is the first of many arrests to come of State Department officials, to eventually culminate in the arrest of Hillary herself.