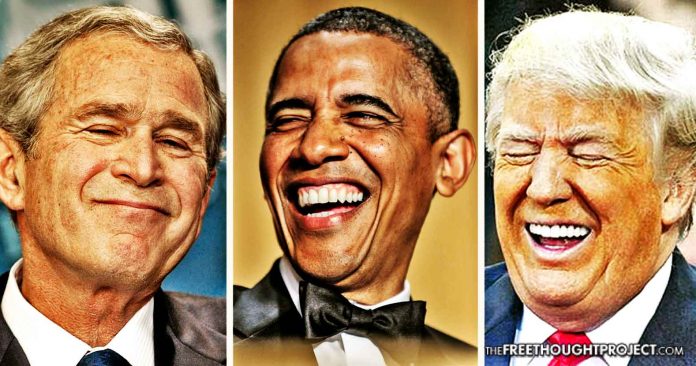 In May 2004, one year after the U.S. commenced a full-scale invasion of Iraq, the New York Times issued a half-baked apology for its abysmal coverage of the “intelligence” used to convince America that Iraq was a threat.

“Looking back, we wish we had been more aggressive in re-examining the claims as new evidence emerged — or failed to emerge,” wrote the NYT editors. They also lamented their dependence on Iraqi defectors who made spurious claims to further the goal of regime change.

It was a grudging admission that the famous newspaper played a critical role in pushing lies and propaganda, to lead the U.S. into a ‘pre-emptive’ war of choice. Other corporate media outlets, including those in the neoconservative (i.e. The Weekly Standard) and liberal interventionist camps, apparently felt no remorse at betraying the public.

To be fair, it wasn’t all the fault of ‘patriotic’ American media. In Sept. 2002, the Bush-Cheney cabal installed a special Pentagon intelligence unit to create the web of lies and spin needed to bring forth the Iraq war drums.

The Office of Special Plans (OSP), led by Paul Wolfowitz and Douglas Feith, used their imagination and hard-line neocon belief in “regime change” to create Iraqi WMD and ties to terror out of thin air. With the “war on terror” as an excuse and Dick Cheney as their cover, OSP bypassed normal intelligence routes and brought what they wanted straight to President Bush.

In January 2004, Mother Jones exposed the workings of this “secret Pentagon intelligence unit and of the Defense Department’s war-planning task force,” made up of “a close-knit team of ideologues who spent a decade or more hammering out plans for an attack on Iraq and who used the events of September 11, 2001, to set it into motion.”

An essential part of this operation was input from the infamous defector, Ahmed Chalabi, and the Iraqi National Congress.

“According to multiple sources, Chalabi’s Iraqi National Congress sent a steady stream of misleading and often faked intelligence reports into U.S. intelligence channels. That information would flow sometimes into NESA/OSP directly, sometimes through Defense Intelligence Agency debriefings of Iraqi defectors via the Defense Human Intelligence Service, and sometimes through the INC’s own U.S.-funded Intelligence Collection Program, which was overseen by the Pentagon. The INC’s intelligence “isn’t reliable at all,” according to Vincent Cannistraro, a former CIA chief of counterterrorism. “Much of it is propaganda. Much of it is telling the Defense Department what they want to hear, using alleged informants and defectors who say what Chalabi wants them to say, [creating] cooked information that goes right into presidential and vice presidential speeches.”

Fast-forward to 2017, and the U.S. is backing other “rebel” groups in other Middle Eastern countries long targeted for regime change – and using bogus intel.

The 2013 sarin gas attack that killed at least 281 Syrian civilians was immediately blamed on Assad, trumpeted by Establishment media as a “red line” meaning Assad should be forcefully removed. But it turns out the chemicals most likely came from Turkish intelligence and were fired from rebel-controlled territory.

Soon after President Trump made the comment that regime change in Syria was no longer the goal, the April 4, 2017 sarin gas attack took place in Khan Sheikhoun, killing at least 74 Syrian people. Yet again, American corporate media parroted the government line. No skepticism, no questioning.

With the Tomahawk missile response, Trump had finally come around to the neocon/liberal interventionist agenda – and the MSM were positively thrilled.

Pundits were quick to cement the narrative that ‘Assad did it’ before people could think too much, despite quickly mounting evidence that the official narrative was suspect. Former CIA agents were questioning the rationale, and then video proof emerged of evidence tampering at the chemical attack site.

In fact, an MIT weapons expert and former DoD science advisor released his analysis, saying the evidence for the April sarin gas attack was tampered with or staged. Theodore Postol stated that the White House’s supposed proof “does not provide any evidence whatsoever that the US government has concrete knowledge that the government of Syria was the source of the chemical attack in Khan Sheikhoun.”

The parallels are easy to draw between Syrian war propaganda and Iraq war propaganda, and no less troubling in their potential to draw the U.S. into launching another “regime change” invasion. Countless lives lost and unimaginable destruction.

Neocons and liberal interventionists are gnashing their teeth at the prospect of bringing Syria into the Western fold through military might.

The Wolfowitz of today appears to be National Security Adviser H.R. McMaster – a darling of the neocon cabal and “golden child” of disgraced General David Petraeus. It was recently revealed that McMaster is “manipulating intelligence reports given to President Donald Trump” and “seeking to involve the U.S. in a full scale war in Syria” with 150,000 American ground troops.

McMaster may not have the Office of Special Plans (or he may have something else entirely), but the threat of bogus intelligence to justify full-scale war is just as real.

If the mainstream media have an ounce of credibility, they will begin questioning the government narrative instead of immediately reporting it as fact. We cannot be led into another war based on government propaganda and the abandonment of skepticism.

Justin Gardner is a peaceful free-thinker with a background in the biological sciences. He is interested in bringing rationality back into the national discourse, and independent journalism as a challenge to the status quo. Gardner finds inspiration in the garden and people who promote peace and goodwill to all life.