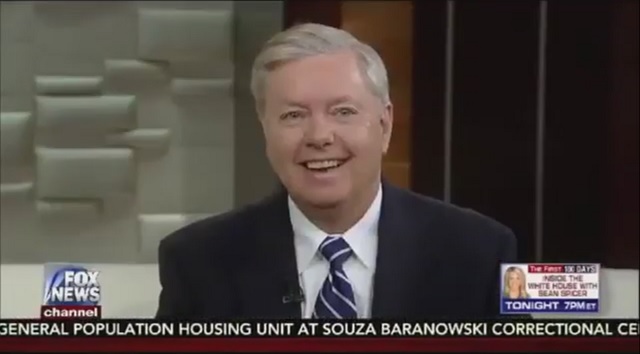 Wednesday on Fox and Friends he said, “I am like the happiest dude in America right now.”

“We have got a president and a national security team that I’ve been dreaming of for eight years,” Graham said.

Graham, who unsuccessfully ran against Trump during the 2016 Republican primaries, cited Trump’s decision to put Iran “on notice” in February, and for his increased aggression against North Korea as the country continues to conduct missile tests, as the reasons he was pleased. Graham had been a leading Republican who opposed Trump, but he began to pivot after Trump launched an attack on a Syrian air base in retaliation for a chemical weapons attack against civilians that the administration attributed to the Syrian government.

On Tuesday night, the Trump administration told Congress that Iran was in compliance with the Iran nuclear deal, which Trump fiercely criticized during his campaign, and it extended sanctions relief to the country. But Secretary of State Rex Tillerson said the U.S. would review the agreement.

“To me, that has been music to my ears,” Graham said. “Iran is running through the Mideast. They are toppling every government they can get their hands on. North Korea, if I were Kim Jong Un, whatever his name is, I would listen to Mike Pence. The fact that the vice president of the United States went to the DMZ, looked across the way and said, ‘We’re watching you’; Donald Trump is not going to let this nut job in North Korea get a missile to hit America. And if I were North Korea and China, I would start thinking anew about the president of the United States.”

This is more evidence there’s been some sort of neocon coup behind the scenes we’re not being clued in to.