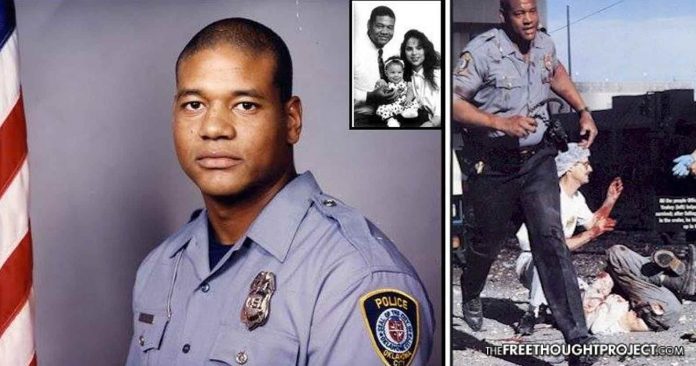 Oklahoma City, OK – Instead of being treated as the hero he truly was, Sgt. Terrance Yeakey was silenced by his own government in an effort to keep him from exposing their complicity in one of the largest mass murders in American history – which senselessly ended the lives of 168 people, including 19 children.

According to his widow, instead of being showered with accolades by the US government for his heroism, Yeakey was killed, with his death being framed to look like a suicide (although a very poorly staged one) only days before receiving the police department’s Medal of Valor for his heroic rescue efforts on day of the Oklahoma City bombing.

On May 11, 1996, only days after his Yeakey’s death, the New York Times ran a story with the headline – ‘A Policeman Who Rescued 4 in Bombing Kills Himself’ – but the bold assertion — that hero cop Sgt. Terrance Yeakey killed himself — couldn’t be further from the truth.

While the NY Times article claimed that Yeakey committed suicide because he was living in such emotional pain from not being able to do more to help the people injured in the bombing, and that he was suffering from intense survivor guilt which he was unable to manage, this information has been repeatedly refuted by Yeakey’s family.

In an effort to further muddy the waters surrounding his death, the Times story went on to claim:

“The police are investigating a report that Sergeant Yeakey had violated an order barring him from going near his former wife, said Capt. Bill Citty, a spokesman. Sergeant Yeakey also had a similar order against her, Captain Citty said. Efforts to locate her today were unsuccessful.”

Sgt. Yeakey’s body was found in a field in El Reno, OK, over a mile away from his abandoned vehicle. There was an extremely large amount of blood found in his vehicle, he had been bound, had rope burn on his neck, ligature marks on his wrists, numerous deep cuts, likely tortured and killed execution-style with a single bullet that entered his right temple at a 45-degree angle. To top it off, no gun was found at the scene of his death — until an FBI agent showed up and suspiciously found a gun in an already thoroughly searched area within 5 minutes of being there.

Sgt. Terrance Yeakey was a 7-year veteran of the Oklahoma City PD, one of the first on the scene of the OKC bombing at the Alfred P. Murrah Federal Building in Oklahoma City. Yeakey became known as a hero after saving the lives of eight people on the morning of April 19, 1995. However, he was uncomfortable being looked at as a hero and didn’t consider himself one, only as a man doing his job.

Far from being suicidal, Yeakey was in the process of achieving some major life goals. He was scheduled for a final interview for a job with the FBI in Irving, TX, and with hopes of being hired to work for the FBI in Dallas. In direct contradiction to the Times nebulous reporting about the Yeakey’s potential relationship trouble, the couple had recently reconciled and had discussed getting remarried.

The real story behind Yeakey’s death, as attested to by his ex-wife, Tonia Yeakey, is that he witnessed things during his response to the bombing which did not agree with the ‘official version’ of events being forwarded by law enforcement and national media at that time and began collecting evidence to support his contentions.

In an interview on AM1300 KAKC, in 1998, Tonia Yeakey clearly exposes the reality underpinning the death of Terrance Yeakey. The extremely important interview with Tonia Yeakey can be heard in the video below — and begins at the 8-minute mark (please watch):

Although no one is sure exactly what Yeakey witnessed, or what exact information he had collected, according to friends and family, he was being intimidated by federal authorities due to his pursuit of the truth and the information in his possession. Additionally, forces within the OCPD were trying to pressure him into signing off on a version of events from the morning of the bombing to which Terry was resistant to do, as he wanted his report to reflect the truth as he witnessed it, according to his ex-wife Tonia.

Essentially, Yeakey was under constant pressure for his refusal to go along with official versions of events during and after the OKC bombing; and because of his refusal to change his story about what he saw that fateful day, he was the target of horrific persecution from his brothers in law enforcement.

Yeakey had compiled his findings in a storage facility outside of El Reno, Oklahoma. Adding weight to the theory that he was “suicided” to keep him quiet, his last known words were,

“As soon as I shake these Feds that are following me, I’ll be back and we’ll go to dinner.”

Immediately upon being notified of Terrance Yeakey’s death, his family insisted that Yeakey had not killed himself — and to this day they maintain that he was murdered and DID NOT commit suicide.

The reality is that there was a high-level federal operation called PATCON, which infiltrated the “patriot movement” across the US, during the Clinton administration, with informants and provocateurs that are likely connected in some way to the OKC bombing. It’s more than probable that Yeakey’s killing was carried out in an effort to cover up the extent to which federal assets, working under PATCON (i.e. informants/provocateurs/infiltrators), were involved in the OKC bombing plot, thus shielding the federal government from potential blowback.

Please watch the extremely informative and startling video below about Sgt. Terrance Yeakey and learn in more detail about the events that surrounded Terry’s death.

Please share this story to help expose this vast coverup — and the murder of a real American hero!