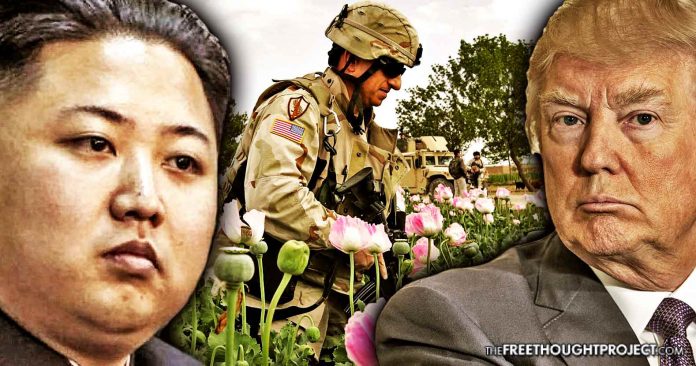 Prior to the U.S. invasion and occupation that sent production and cultivation skyrocketing 35-fold in just the first 13 years, the Taliban had successfully decimated the opium poppy crop in Afghanistan.

That is, until North Korea just said ‘no’ to the Drug War.

“In its early stage, the Kim Jong-un regime declared a war against drugs, getting rid of poppy fields,” Kang Cheol-hwan, president of the defector organization, North Korea Strategy Center, told Yonhap News Agency last month. “But now they are cultivating them again.”

North Korea’s opium poppies remained at least somewhat secreted from its citizens under the rule of Kim Jong-il.

In an August 2011 interview with NPR, Ma Young Ae — a defector and former North Korean spy who lives in Virginia — explained she “worked for Kim Jong Il’s internal police force. Her job was was to track down drug smugglers. That sounds like pretty normal law enforcement, except for one difference. She was supposed to stop small-time Korean drug dealers in order to protect the biggest drug dealer in the country: the North Korean government.

“Ma told us the North Korean government produced opium on a large scale. But it hid its poppy fields from most of the population. Ma only saw the fields because she was an insider.

“After harvesting the fields, the government would put its empty factories to use. The government would turn on its production lines at night and process opium, Ma says. Then they would pack the product in plastic cubes the size of dictionaries and smuggle it out of the country through China.”

Kim Jong-il’s son and successor instead chose to fight the war on drugs — until the Chinese Commerce Ministry suspended imports of coal from February through the end of the year, in response to one of Pyongyang’s contentious ballistic missiles tests.

Faced with the rapid loss of hard currency and an uphill battle to fund the regime’s activities — coal comprised an estimated 40 percent of North Korea’s exports to China — Kim Jong-un appears to have cozied to the wallet-stuffing possibilities the prized poppy provides.

Noting the war on drugs had already failed, Kang added, “The North is cultivating poppy fields again for drug smuggling as a way to secure funds to manage its regime.”

Funding an entire government’s operations from the cultivation and production of opium should be a piece of cake — should illegal markets fail, America has an insidious obsession with opioids.

Tens of thousands each year die of overdoses from heroin, opioids, and/or their synthetics in the United States, alone — in large part, courtesy of the pharmaceutical industry’s reckless devotion to painkillers.

Vox reported March 29 the opioid “epidemic has by and large been caused by the rise in opioid overdose deaths. First, opioid painkiller overdoses began to rise, as doctors began to fill out a record number of prescriptions for the drugs in an attempt to treat patients’ pain conditions. Then, people hooked on painkillers began to move over to heroin as they or their sources of drugs lost their prescriptions. And recently, more people have begun moving to fentanyl, an opioid that’s even more potent and cheaper than heroin. The result is a deadly epidemic that so far shows no signs of slowing down.”

And how could it slow down?

Opioids doled out like candy by doctors and hospitals to those suffering but unaware of the addiction pitfalls inherent in rising tolerance, short-term prescriptions, and — in particular — the availability of potent substances like heroin and fentanyl on the black market.

This isn’t by far purely an issue to be blamed on illegal trade in drugs. Media Roots’ Abby Martin elaborated on the perniciousness of the opioid crisis in 2014, stating,

“In today’s globalized world of rule-for-profit, one can’t discount the role that multinational corporations play in US foreign policy decisions either. Not only have oil companies and private military contractors made a killing off the occupation, big pharmaceutical companies, which collectively lobby over 250 million dollars annually to Congress, need opium latex to manufacture drugs for this pill happy nation. As far as the political elite funneling the tainted funds, the recent HSBC bank scandal exposed how trillions of dollars in black market sales are brazenly being laundered offshore.”

For the welcome relief opioid painkillers offer those who suffer severe discomfort, the medications’ highly-addictive nature leaves doctors reluctant to write strong prescriptions. However, if tolerance builds, and medical personnel refuse to increase dosage accordingly, those still facing unbearable pain often shop black markets — where the purity and safety of substances cannot be verified — to supplement their supplies.

It must be duly noted, America’s opioid epidemic mushroomed only after U.S. troops invaded Afghanistan.

“Within six months of the U.S. invasion,” wrote Matthieu Aikins for the December 4, 2014, Rolling Stone, “the warlords we backed were running the opium trade, and the spring of 2002 saw a bumper harvest of 3,400 tons.”

Just prior to boots and bombs hitting the ground, opium production in Afghanistan fell to an impressive low of 185 pounds — all-too ironically, thanks to Taliban efforts to eradicate the entire supply of opium poppies.

Mint Press News’ Mnar Muhawesh wrote last year, “The War in Afghanistan saw the country’s practically dead opium industry expanded dramatically. By 2014, Afghanistan was producing twice as much opium as it did in 2000. By 2015, Afghanistan was the source of 90 percent of the world’s opium poppy.”

Claiming terrorism as the impetus for invading Afghanistan would be at least as absurd as the Drug Enforcement Agency claiming the global War on Drugs has been a success. Taliban forces have returned in strength to the nation whose opium poppies are guarded by U.S. troops — who are putatively present to fight in the ongoing War on Terror.

North Korea — who announced weeks ago its debilitated economy would seek relief from, yes, the cultivation and production of opium poppies.

Perpetually bellicose Pyongyang is no stranger to hyperbole in military prowess — so much so, threats of direct nuclear strikes by North Korea against the United States are typically downplayed by Washington, if not dismissed with a snide grin.

Pyongyang’s testing of ballistic and other missiles has been deemed a threat to the national security of South Korea, where a U.S. missile defense system pointed North has further heightened hostilities on the peninsula and in the region.

“The leader of North Korea again recklessly tried to provoke something by launching a missile.”

Kim In Ryong, North Korea’s Deputy Ambassador to the United Nations, warned on Monday the U.S. has “created a dangerous situation in which a thermonuclear war may break out at any minute” — adding, Pyongyang “is ready to react to any mode of war desired by the U.S.”

Whether that war includes plans for the U.S. usurpation of North Korea’s literal cash crop of opium poppies will undoubtedly be determined soon.