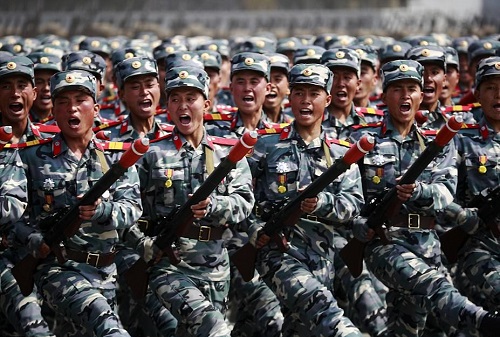 Back in 2013 during the last major flare up between the U.S. and North Korea I wrote an extensive analysis on the North Korean wild card and how it could be used by globalists as a catalyst for international economic instability titled ‘Will Globalists Use North Korea To Trigger Catastrophe?’ As I have warned consistently over the years, like Syria, North Korea is a longstanding chaos box; a big red button that the elites can press any time they wish to instigate a chain of greater geopolitical tensions. The question has always been, will they actually use it?

Well, it appears that, under the Trump administration, the establishment might go for broke. I have not seen U.S. war rhetoric so intense since the second invasion of Iraq, and all over missile tests which have been standard fare for North Korea for many years. With whispers by Trump aides of a possible 50,000 boots on the ground in Syria, and open discussion of preemptive strikes in North Korea, this time kinetic conflict is highly likely.

Yes, we have see such military pressures before, but this time feels different. Why is an aimless quagmire war with massive potential global financial repercussions more likely under Trump? Because Trump ran under a nationalist conservative banner, and he will forever be labeled a nationalist conservative even if his behavior appears to be more globalist in nature. Rhetoric is often more psychologically powerful in the minds of the masses than action. Therefore, EVERYTHING Trump does from now on will also be labeled a product of the “nationalist conservative” ideology; including all of his screw-ups. And, with Trump in office the establishment is perfectly happy to pursue actions once considered taboo, because demonizing conservatives and liberty proponents is one of their primary objectives.

When the real insanity starts, liberty movement activists will gnash their teeth and scream at the top of their lungs that Trump is “not acting like a conservative,” so how can conservative thinking be blamed by extension? But these people just don’t grasp the thought processes of the human mind. No matter how much we try to separate ourselves from the Trump-train if (or when) he goes full-bore globalist, our efforts will be futile. The mainstream media has spent considerable time and effort making sure that all of us are lumped in with the so-called “alt-right.”  Remember, I tried to warn the movement about this long before Trump won the election.

Currently, there are questions as to whether or not a naval task force is en route to North Korea.  I would not trust the latest reports that all units are headed to Australia when Vice President Mike Pence is in Japan yesterday saying “the sword stands ready”.  Could this be more posturing or a precursor to a strike scenario? I am reminded of the U.S.S. Maddox which was sent to patrol the waters off of Vietnam, the same destroyer that reported an attack by North Vietnamese torpedo boats which was used as justification for the initiation of the Vietnam War. As it turned out, no such attack actually occurred.

The presence of a U.S. fleet off North Korea could only be intended to instigate further aggression, not defuse the situation.

So, if war with North Korea is inevitable given the circumstances, what would such a war look like? Here are some elements I think are most important; elements that make the war almost unwinnable, if winning is even the purpose…

The North Koreans spent the better part of the last war with the U.S. being heavily battered by air bombardments. They have had plenty of time since then to consider this problem and prepare. Even the most gung-ho American military minds are forced to admit that using only air based attacks in North Korea is not practical. And where we have been spoiled by steady video streams of laser guided hell dropped on Iraqi and Afghani targets in the past, don’t expect things to go so easily in North Korea.

While North Korea is still rife with economic problems (like every other communist and socialist nation), they still have an industrial base and produce many of their own arms. This includes and extensive missile net backed by a maze of radar systems. Their air force is by all accounts obsolete, but as I have mentioned in the past, advanced missile defense is the wave of the future. It’s cheaper and can render expensive enemy air force and naval units impotent.

North Korea uses an indigenous built surface-to-air missile (SAM) system called the KN-06 which is as capable as some Russian SAM systems. They also field huge numbers of MANPAD (man-portable air defense) units against planes and helicopters attempting to dodge radar defenses at low altitudes. This is layered on top of a vast array of anti-aircraft artillery. And, most of this anti-air apparatus is either mobile or based underground.

What this means is, a ground invasion is the ONLY way to attack North Korea effectively and make room for air units to strike interior targets.

The Pentagon estimates at least 6,000 to 8,000 underground military facilities in North Korea. New bases are being discovered all the time.  While “bunker buster” bombs can possibly damage these facilities, it is unlikely that they would be completely destroyed or rendered ineffective. There is also an estimated 84 large tunnels through mountains on the southern border which would allow an immediate invasion by North Korean ground forces into South Korea. Only four of these tunnel exits have been found and blocked by South Korea.

It is important to remember that underground infrastructure has always been the bane of the modern western military. These facilities will not be taken by air. They will have to be taken the hard way — with ground troops.

In 2013 the Department of Defense reported North Korean ground forces at around 950,000. This, of course, does not count their nearly 8 million infantry reserves. They also boast over 200,000 highly trained paramilitary soldiers. North Korea has no means whatsoever to project these forces overseas against the U.S. or anyone else other than South Korea. The only way they can do damage to U.S. forces is if we show up on their doorstep.

Since a ground invasion is the only way to proceed with what will obviously be “regime change” in North Korea, U.S. forces will be facing an endless mire of mountain warfare worse than Afghanistan with limited air support options. If it comes down to a war of attrition rather than superior technology, victory will be impossible in North Korea.

The consensus view among military analysts is that North Korea will never attempt to use nukes offensively because the resulting retaliation by the U.S. would be devastating.  But you often do not hear much discussion about NK using nukes defensively, and what that would mean for an invading army.

I agree that though the mainstream media is bombarding us constantly with images of a psychotic dictatorship, North Korea is not insane enough to use nukes against the U.S. or its allies outright. If such an event did occur, I would immediately suspect the possibility of a false flag because there would be zero gain for North Korea. That said, in the event of a ground invasion into North Korea, the use of nuclear weapons becomes highly advantageous for Pyongyang.

Consider this, with vast numbers of U.S. ground forces operating in the region, nuclear retaliation by the U.S. is simply not going to happen.  A pullout of most troops would have to take place. North Korea needs only one nuke strike to destroy a U.S. fleet or hit a large civilian target in South Korea killing potential millions or hit a U.S. troop base in South Korea killing tens of thousands of American soldiers.

Once we commit ground troops into the region, we make a nuclear attack USEFUL to North Korea, when it never would have been useful before. This is why the preemptive strike rhetoric based on a rational of stopping a “more nuclear capable” North Korea is either pure stupidity or an engineered crisis in the making.

Is China’s strange shift in support of tougher actions against North Korea legitimate? Well, if it is, then I think this would support my longtime assertion that China is NOT anti-globalist at all, but just another branch of the globalist cabal. Perhaps Trump’s refusal to label them currency manipulators is also evidence of this. That is a discussion for another time, though.

China’s sudden softening of stance against U.S. pressures on North Korea seems to me to be the most blatant signal that an actual war is coming. If China refuses to present military or economic repercussions to act as a deterrent to invasion, then an invasion is likely to happen.  This does not mean, though, that a future crisis between the U.S. and China is not scheduled.

In fact, an invasion by America into North Korea opens numerous doors to all kinds of crisis events the establishment can exploit. For example, how many people are naive enough to expect that U.S. air maneuvers will respect Chinese air space restrictions? I hope not many.  Having American military units in a war stance so close to the Chinese border is a recipe for disaster, and I am not necessarily referring to military disaster.

War, contrary to popular belief, is not good for the economy. In fact, war is the perfect poison for economic trade and production. The U.S. in particular is utterly dependent on the international use of the dollar as the world reserve currency. Without this status, the American economy is dead in the water. China is a central pillar in global trade and could, with the help of a few other nations, kill the dollar’s reserve status very quickly.

If you are curious as to why international financiers would be interested in undermining the U.S. economy in such a way, I suggest you read my article The Economic End Game Explained. The greater point is this — a war with North Korea would have nothing to do with North Korea. It would only be a means to a greater end. There are those people out there who claim to be “conservative” that always weasel out of the woodwork in times like these to pound the war fever drum.  But if you think that forced regime change overseas is America’s job or duty you are not a conservative, you are a statist.

I also cringe at the crowd of dupes that constantly bubbles to the surface claiming this time around, the invasion will be “easy”, parroting the party line.  “Done in two months!”, they say.  The delusion inherent in this thinking is astounding, and comes from the old-guard Republican/Neo-Con ideology.  Remember how quick and cheap they said Iraq and Afghanistan would be?  At bottom, there is little or nothing to be gained by Americans in this kind of conflagration.  So we should be asking ourselves, who actually would gain from it?